The Phoenix operations team will do one more test dig on Mars.
Lori Stiles
June 3, 2008
Resources for the Media
Extra Info: 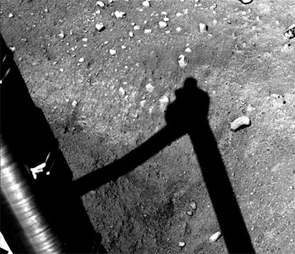 Scoopful of Martian Soil After Release

Engineers and scientists operating the Phoenix Mars Lander decided early today to repeat a practice of releasing Martian soil from the scoop on the lander's robotic arm.

When the lander collected and released its first scoopful of soil on Sunday, some of the sample stuck to the scoop. The team told Phoenix this morning to lift another surface sample and release it, with more extensive imaging of the steps in the process.

"We are proceeding cautiously," said Phoenix principal investigator Peter Smith of The University of Arizona. "Before we begin delivering samples to the instruments on the deck, we want a good understanding of how the soil behaves."

An image of one of the analytical instruments received Monday night underscored the need for precise release of samples. It shows the two spring-loaded doors on one of the tiny ovens of the Thermal and Evolved-Gas Analyzer after a command for them to open in preparation for receiving the instrument's first soil sample. One opened fully, the other partly. Phoenix engineers said the opening is wide enough to receive a sample, and that it might still open further with daily temperature changes.

The Phoenix Mission is led by the UA on behalf of NASA. Project management of the mission is by NASA's Jet Propulsion Laboratory, located in Pasadena, Calif. Spacecraft development is by Lockheed Martin Space Systems, located in Denver.