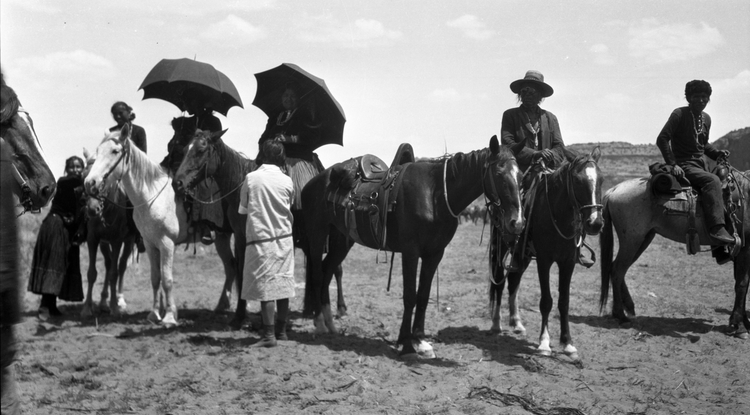 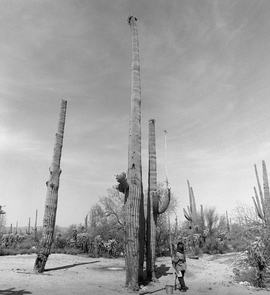 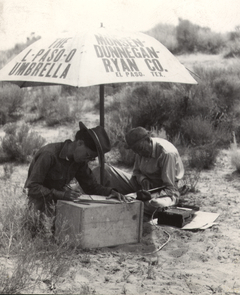 Watson Smith took this 1938 image of Anna Shepard and her father participating in excavations at the Awatovi Ruins on the Hopi Indian Reservation in northeastern Arizona. (Photo courtesy of Arizona State Museum) 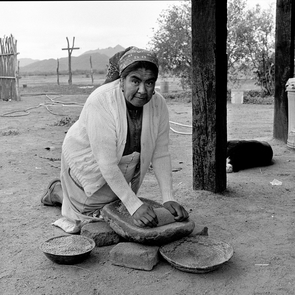 "Saving an American Treasure: An Unparalleled Collection of Anthropological Photographs," a new exhibit opening at Arizona State Museum on August 17, will share select examples from its collection of documentary photographs recently recognized at the national level.

The Arizona State Museum's photographic collection attained American Treasure status through the federal Save America’s Treasures program. This designation underscores the significance of one of the nation’s unparalleled collections of anthropological photographic materials. The collection documents human ingenuity and cultural traditions in what is now the U.S. Southwest and northwest Mexico from 13,000 years ago to the present.

“This designation is the ASM’s third,” said Jannelle Weakly, photographic collections manager at the museum. “So far as we know, we are the only institution in the country to have three separate collections so honored, a fact that emphasizes how important the ASM’s holdings are to the nation’s cultural history.”

The museum’s pottery collection, which includes 24,000 whole vessels, and basketry collection, with 35,000 specimens, attained American Treasure status in 2000 and 2011, respectively.

"With more than 525,000 photographic prints, negatives, and transparencies, and more than 250 movie films, our collection is a visual record of our region’s 13,000-year human history,” Weakly said. “It is the region’s scrapbook – a store of irreplaceable memories, a record of peoples and processes that can never be replicated. No other visual archive has the same depth and breadth in its coverage of the human history of our region. Individual images range from historic to modern, from documentary to fine art.”

As a whole, the collection illustrates:

“These images serve as evidence of the cultures from which the objects we curate came, the individuals by whom they were made, the materials and technologies used to produce them, the ways in which they were used, or – in the case of archaeological finds – the circumstances of their discovery,” said Arizona State Museum Director Patrick Lyons. “Images of individuals, groups, and communities illuminate identity, diversity, lifeways, and resilience.”

Researchers from around the world utilize the collection for research and to illustrate presentations and scholarly publications, as well as general-interest books, articles and documentary films. Thousands of visitors enjoy the images, which continue to broaden national and international understanding and appreciation of the indigenous cultures of the U.S. Southwest and northwest Mexico.

Unfortunately, the older negatives and transparencies are at risk of deterioration. Many of the films are suffering chemical degradation, and some are at risk of complete loss. The collection is currently stored in seven separate rooms that lack climate control, putting the images under immediate and persistent threat of degradation. Lyons and Weakly are working to change that.

A new initiative aims to create a secure and controlled multiclimate suite on the third floor of the museum's historic north building, immediately stabilizing the sensitive and at-risk media. It is estimated that the upgraded environment will extend the life of a color slide, for example, by 1,000 years, ensuring that the entire collection will continue to be available to students, researchers, members of Native American communities and the general public for centuries to come.

“We all know or can imagine how it would feel to lose our personal photographs and videos, never again to be able to see them, or to use them to illustrate the stories of our lives,” Lyons said. “A great many of our fellow Americans have experienced this of late due to the string of hurricanes in the east and wildfires in the west. My own family lost generations of photographs in a house fire 40 years ago. We don’t want to lose the region’s visual memories. It is now time for us to take action to ensure their preservation.”

The total project budget is $2.2 million. Federal grants in the amounts of $500,000 and $350,000, augmented by in-kind contributions from the University of Arizona, are combining to bring this important initiative within reach.