Capturing an image of an electron in motion could have considerable impacts in fields like technology, medicine and beyond.
Emily Litvack
,
Research, Innovation & Impact
March 10, 2020
Resources for the Media 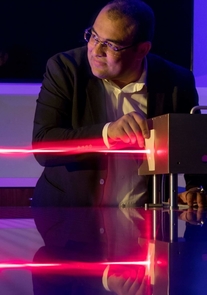 Mohammed Hassan, a University of Arizona assistant professor of physics and optical sciences, wants to be the first to photograph an electron in motion. "The idea of seeing something humans have never seen before drives me," Hassan said. (Photo: Chris Richards/Alumni Association)

Nobody has ever photographed an electron in motion. Mohammed Hassan, University of Arizona assistant professor of physics and optical sciences, wants to be the first. Supporting his mission is the W.M. Keck Foundation, which recently awarded him $1.1 million.

"I am thankful to the W.M. Keck Foundation for their support in funding this high-risk, high-reward project, and I'm hopeful it will help realize my dream," Hassan said.

The motions of electrons are measured in a unit that most people haven't even heard of: attoseconds. In one heartbeat, a million trillion attoseconds pass. An electron could travel the circumference of the Earth in 18 seconds flat.

"The idea of seeing something humans have never seen before drives me," Hassan said. "Electron motion is in every aspect of life. Even our eyes see because electron motion generates light, transmits information and forms a picture in the brain. By imaging electron motion, we would open a new window into life itself."

Yet even the most expensive, sophisticated commercially available electron microscopes don't come close to being able to photograph something that small, moving that fast.

"To directly capture a clear image of any motion, you need a camera with a shutter speed that is faster than the motion you're capturing," Hassan explained. "And you need spatial resolution – or the number of pixels – to be larger than the size of the object you're capturing."

The camera Hassan and his team are developing will use a shutter that opens and closes in a single attosecond. Anything slower would make an electron appear exactly as we imagine it: a whirring blur. Hassan has bought a million-dollar commercial transmission electron microscope and is now in the process of modifying it to capture images in attoseconds. He calls the technology "attomicroscopy," and is working with UArizona's Tech Launch Arizona to patent the innovation.

"Dr. Hassan's ambitious project is an incredible example of how we live out the University of Arizona's core value of exploration. Our faculty continually push boundaries and travel uncharted paths,” said University of Arizona President Robert C. Robbins. "I look forward to following Dr. Hassan's progress and seeing what he's able to achieve next with this support from the W.M. Keck Foundation."

In 2013, Hassan was a postdoctoral scholar at the Max-Planck Institute of Quantum Optics in Munich, Germany, where he developed a device to compress laser pulses, making him a Guinness World Record holder for generating the fastest pulse of visible light. As he builds the world's first microscope fast enough to image an electron, his achievement in laser pulse technology will play an essential role in his one-of-a-kind attomicroscopy.

"This project is full of technical challenges. If it weren't, anybody could do it," he said. "But I believe we have the expertise to address them one by one until we reach our goal."

"With support from the W.M. Keck Foundation and with Dr. Hassan's vision and ingenuity, we have the opportunity to solve one of the biggest scientific challenges of our era," said Elizabeth "Betsy" Cantwell, senior vice president for research and innovation at the University of Arizona.

The ability to see electrons in motion would have real impacts.

Using laser pulses, for example, scientists may be able to control electron motion and spur a technological revolution, with electronics – like smartphones and computers – that could transfer data a million times faster than current speeds. Likewise, by controlling electron motion in chemical compounds, physicians may be able to provide personalized medication for patients based on the structure of their DNA.

"These are just two examples, but the possibilities are endless," said Hassan, who also is a member of the BIO5 Institute.

Based in Los Angeles, the W.M. Keck Foundation was established in 1954 by the late W.M. Keck, founder of the Superior Oil Co. The foundation's grantmaking is focused primarily on pioneering efforts in the areas of medical research and science and engineering.  The foundation also maintains a Southern California Grant Program that provides support for the Los Angeles community, with a special emphasis on children and youth. For more information, visit www.wmkeck.org.