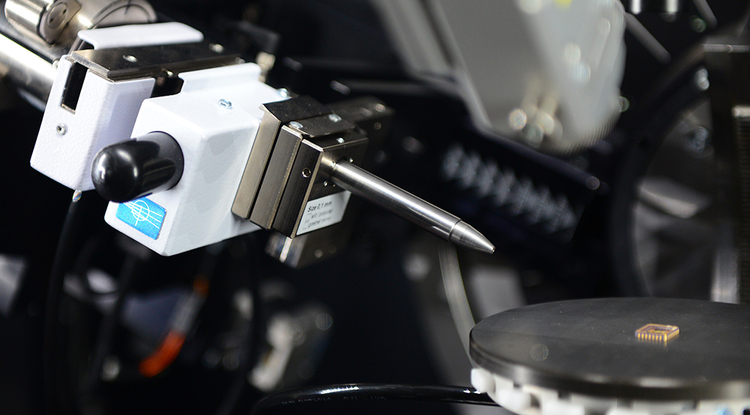 Using focused X-rays, researchers can peek inside a sample of magnetic tunnel junctions and resolve the arrangement of atoms in the thin layers. (Image: Weigang Wang)

UArizona researchers report a discovery that opens new possibilities in the development of spintronics, a new type of memory storage capable of processing information much faster than current technology while consuming less energy.
Daniel Stolte
,
University Communications
May 12, 2020
Resources for the Media 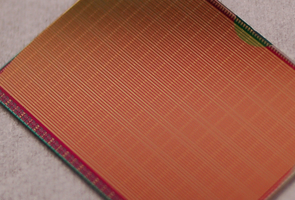 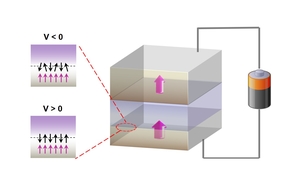 A simplified schematic of a magnetic tunnel junction where a non-magnetic tunnel barrier is sandwiched between two magnetic layers, whose spins are aligned in a single direction. (Illustration: Weigang Wang) 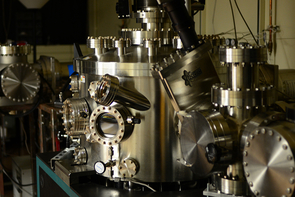 Imagine biting into a peanut butter sandwich and discovering a slice of cheese tucked between the bread and the butter. In a way, this is what happened to a team of physicists at the University of Arizona, except the "cheese" was a layer of iron oxide, less than one atomic layer thick, and the "sandwich" was a magnetic tunnel junction – a tiny, layered structure of exotic materials that someday may replace current silicon-based computer transistors and revolutionize computing. Iron oxide – a material related to what is commonly known as rust – exhibits exotic properties when its thickness approaches that of single atoms.

A team led by Weigang Wang, professor in the UArizona Department of Physics, suggest in a new study that the previously unknown layer is responsible for certain behaviors of magnetic tunnel junctions that had physicists puzzled for many years. The discovery, published in the journal Physical Review Letters, opens up unexpected possibilities for developing the technology further.

Unlike conventional micro-transistors, magnetic tunnel junctions don't use the electrical charge of electrons to store information, but take advantage of a quantum-mechanical property that electrons have, which is referred to as "spin." Known as spintronics, computing technology based on magnetic tunnel junctions is still very much in the experimental phase, and applications are extremely limited. For example, the technology is used in aircraft and slot machines to protect stored data from sudden power outages.

This is possible because magnetic tunnel junctions process and store information by switching the orientation of nano-scale magnets instead of moving electrons around as regular transistors do.

"When you flip the direction of the magnetization, a magnetic tunnel junction behaves like a transistor in that it either is 'on' or 'off'," said Meng Xu, a doctoral student in Wang's lab and first author on the paper. "One of its advantages is that as you keep it in that state, it doesn't consume any energy to maintain the stored information."

Although high-performance magnetic tunnel junctions have been around for about 20 years, scientists have been perplexed by the fact that whenever they measured the difference between the "on" and "off" state, the values were much lower than what the physical properties of these nano-sized switches would predict, limiting the potential of magnetic tunnel junctions as the building blocks of spintronic computing.

That mystery may be explained by the thin layer of iron oxide that Wang and his colleagues discovered at the interface between the two magnetic layers in their magnetic tunnel junction samples – the "cheese slice" in the sandwich analogy.

"We think that this layer acts as a contaminant, preventing our sample from achieving the performance we want to see from a magnetic tunnel junction," Wang said.

However, Wang says the findings are a two-faced medal, because while the unanticipated layer is slimming the prospects for magnetic tunnel junctions by lowering the resistance change in their "on" and "off" state, it is good news in that it opens unexpected opportunities in another area of spintronics.

Wang's group discovered that the layer behaves as a so-called antiferromagnet when they tested the tunnel junctions at extremely cold temperatures below negative 400 degrees Fahrenheit, or negative 245 degrees Celsius.

Antiferromagnets are under intensive research because they can be potentially manipulated at Terahertz frequencies, about 1,000 times faster than existing, silicon-based technology, which typically operates in the Gigahertz region. Until now, however, researchers have struggled with finding ways to manipulate the promising devices, a crucial first step in applying the technology to data storage.

"In a few cases, researchers did successfully manage to control antiferromagnetic materials in isolation," Wang said, "but as soon as you try to incorporate an antiferromagnetic layer into a magnetic tunnel junction – and that's what you have to do in order to use them for spintronics – it kills the whole thing."

Hoewever, the layer reported in this study doesn't, Wang's team found. For the first time, this may allow researchers to marry the advantages of antiferromagnets – unprecedented read and write speed – with the controllability of magnetic tunnel junctions, Wang said.

"With this study, we demonstrated for the first time that we can change the antiferromagnetic property of a magnetic tunnel junction using an electrical field, which brings us one step closer toward using antiferromagnetic spintronics for memory storage," Wang said.

Here's why: While using the spins in antiferromagnets to process information vastly increases computational speed, eventually that information has to be converted back into an electrical charge, Wang said.

"Any information that we encode in spin, no matter if antiferromagnetic or magnetic, we eventually want to read out as an electrical signal because the electron is really the best thing we have and the most popular medium to process, read and write information," he said. "That conversion is normally done by magnetic tunnel junctions."

Incorporating antiferromagnetic layers into magnetic tunnel junctions may someday allow engineers to design computers in which the processing of information occurs in the same place as storing information, similar to the human brain.

Spintronic devices offer another advantage over conventional transistors, according to Wang: They don't require energy just to maintain the information stored in the memory.

"With spintronics, you need the electrical field only to write the information, but once that's done, you can switch it off to reduce energy consumption," he said.

Silicon-based transistors on the other hand, suffer from an effect known as electron leakage, Wang said. As manufacturers are cramming more and more transistors into smaller areas of microprocessors, more and more electrons are lost, requiring the device to perform extra work and consume extra energy just to counteract this process.

Electron leakage is one of the reasons why Moore's Law – which states the number of transistors on a chip doubles every two years – is projected to end soon, Wang said.

With spintronic devices, leakage is not an issue; they can store information virtually indefinitely without consuming power.

"It's the same reason your fridge magnets can stay in place for a really long time," he said. "Once the quantum mechanical exchange interaction has been made, no energy input is needed to maintain the magnetization direction."

This research is a collaboration among the University of Arizona, Johns Hopkins University, Oakland University and University of Minnesota. It was supported by the National Science Foundation, the Department of Defense and Semiconductor Research Corporation.