Picking the Best Parent for Your Chicks 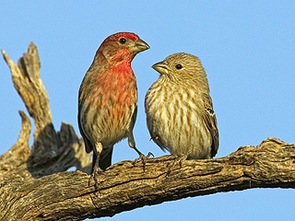 This picture of a pair of house finches shows the bright breeding plumage of the male (left) and the plainer plumage of the female (right). Photo credit: Alex Badyaev.

The local boy with the most bling is a good choice in the spring, but as summer progresses a girl bird's best bet is a stranger.

Who's chosen by whom in the mating game is determined by seasonal changes in the genetic diversity of available mates, according to new research based on a 10-year study of wild finches.

Previous research has shown that female birds often go for the flashier guys. Many biologists argue that sexual selection -- competition for mates -- is the driving force behind the evolution of such elaborate and seemingly useless getups as a male peacock's tail.

"For such elaborate traits to evolve, you have to have mating patterns where everyone wants the same thing," said lead researcher Kevin P. Oh of The University of Arizona in Tucson.

But if everyone mates with the same perfect-looking individual, ultimately that would result in inbreeding, he said.

Particularly healthy kids are produced when the parents are genetically different -- what biologists call complementarity. However, choosing one's genetic better half would generate more diversity in looks, rather than pushing the population toward a uniform dandified appearance.

Alexander V. Badyaev, principal investigator for the UA study, said, "Even though preference for genetically complementary mates is widely documented, it's always puzzled people that individual differences in mate preference do not prevent the evolution of elaborate ornaments."

It all comes down to who's available when a bird is ready to breed, said Oh and Badyaev. Early on, the available mates aren't genetically diverse but some males are very flashy. Later in the season, females who arrive from out of town may not find a flashy male, but can end up with a stranger with genes different from her own.

The whole system is driven by the fact that female birds generally leave home to breed, while the males stay put and breed near their birthplace.

The researchers found that having two seasonal rounds of mate choice, where the second round lessens the inbreeding that would result from the first, not only provides a new explanation of how birds choose mates, but also may apply to other members of the animal kingdom.

Oh, a doctoral student in UA's department of ecology and evolutionary biology, and Badyaev, an assistant professor in the same department, will publish their research paper, "Adaptive genetic complementarity in mate choice coexists with selection for elaborate sexual traits" in an upcoming issue of Proceedings of the Royal Society B. The National Science Foundation funded the research.

Since 1995, Badyaev has been intensively studying a population of house finches (Carpodacus mexicanus) in one site near Missoula, Mont. He now knows intimate details about the lives of approximately 12,000 finches.

During the breeding and nesting season, Badyaev and his team capture birds every day to band and photograph them, take DNA samples and body measurements. The researchers also track the birds' hormonal status throughout the season.

The photos and biochemical analysis of the males' ornamental feathers, which range from dull yellow to deep purple, record how bright the male is in relation to other males.

To determine each bird's genetic make-up, the researchers use a technique called microsatellite DNA genotyping. They also track birds' hormonal profiles and ovulation cycles to determine each female's fertilization window.

The team also locates all the nests, keeps track of activity in the nest and takes DNA samples from the chicks.

Badyaev said, "We have 10 sequential generations of wild birds completely genotyped -- it's never been done before."

The researchers know who was available for mating at any particular point in time, who actually mated with whom, who their kids are and whether their kids survived. The team even knows who participated in "extramarital" trysts that resulted in offspring.

Badyaev said, "We found that each female has about a 10-day period during which mating will result in fertilization." He added, "We thus can see, for each female, whether the male she chose was indeed the most colorful or the most genetically diverse of all males available during her fertility window."

Early in the season, females picked the reddest guy around, not the one most genetically different from her, the researchers found.

And for birds who snuck out for some sex on the side, the researchers found those birds likely chose an out-of-town partner who was more genetically different than their regular mate.

It's a good thing opposites attract, the researchers found -- baby birds with the best survival rates had parents who were dissimilar genetically.

Oh said the team's research shows that basic ecological processes by which young females disperse and males stay home create seasonal cycles of variability in sexual ornamentation and genetic diversity. That overall pattern makes it easy for birds to find their genetic better half and simultaneously enables the evolution of elaborate sexual displays.

Oh and Badyaev are now doing a similarly intensive study of house finches on the UA campus to see if their findings hold up for birds living in a different environment.