Playing the Odds to Your Favor

UA student Jason Xu has been recognized by the College of Science for his undergraduate research.
Tyler J. McDowell-Blanken
,
University Communications
April 23, 2012
Resources for the Media
Extra Info:

For information on how to support science research at the UA, visit the Galileo Circle webpage. 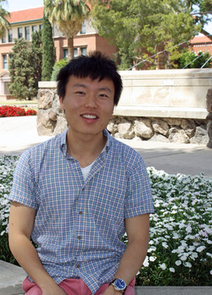 “Jason is a person who has a social conscious, wants to give back to the community and is willing to do more than is asked of him,” said William Velez, a Distinguished Professor of Mathematics who had Xu as a student during one of his Math 215 courses. “He’s just a wonderful person.” (Photo credit: Beatriz Verdugo/UANews)

Wuhan, China and Tucson, Ariz.: These cities are thousands of miles apart, but they have one commonality – University of Arizona student Jason Xu.

A Chinese native and mathematics senior in the Honors College, Xu was selected as the recipient of this year's Excellence in Undergraduate Research award by the UA College of Science at its Galileo Circle reception event.

The award "is a huge honor and means a lot to me. I feel really good to be representing the math department," Xu said.

Xu is humble about the notoriety, citing his research adviser Kevin Lin as someone who "allows me to grow while supplying me with a lot of direction."

"Jason was consistently one of the most engaged students in the class," Lin said, noting Xu's energetic personality as a key element of why he has achieved a great deal of success. "The thing that impresses me is how he always has the energy to do more work."

That same energy now is geared toward his honors thesis, a summary of his current research and how the knowledge gained through his undergraduate experience has assisted along the way.

Xu and Lin are collaborating to study Monte Carlo methods. These methods focus on probability distributions and generating random samples to estimate averages applicable in the evaluation of areas such as physics, energy and population.

"The process is very mathematical, but also very rewarding," Xu said. "Through math, I get to connect with people in a very deep way."

Raised in China by his grandparents for the first three years of his life, Xu lived in Ireland and Canada before making the move to Tucson with his parents at age 8.

During the first few years of his life, Xu's father, Ming Xu, earned his doctorate while studying electrical engineering in Ireland at Queen's University Belfast.

"I really look up to him. Growing up in America, I was able to have so many more opportunities. Now it is my turn to give back," Xu said.

Xu made the jump to the UA after graduating from local Ironwood Ridge High School, while never losing the admiration that he has for the college town.

"I love Tucson; there is such a tight-knit community here," Xu said, adding that the "coffee shops and good music scene" are two of his favorite aspects of the city.

During his time at the UA, Xu accomplished many feats including a Flinn Scholarship, granted to Arizona residents who demonstrate personal and academic achievement upon entering his freshman year and becoming president of the student club Math Cats during his junior year.

He maintains personal hobbies and interests outside of the classroom. Xu likes to skateboard, play the piano and read literature.

"Research can become very isolating; self-doubt occurs at times. You must have a desire or curiosity to solve problems," said Xu, who is minoring in music and economics.

With the experience and knowledge he has already attained during his undergraduate years, Xu will pursue a doctorate in mathematical statistics upon graduaiton.

"I've never wanted to be pigeonholed into one area," Xu said, noting that he aspires to become a professor at a research institution.

"I want to make an impact on the world," said Xu.

By all indications, it looks as though he is on pace to do just that. And knowing Jason Xu, the odds lean in his favor.