Pluto: A Dream 3.7 Billion Miles in the Making

What do you know about Pluto? Check yourself against this Q&A. 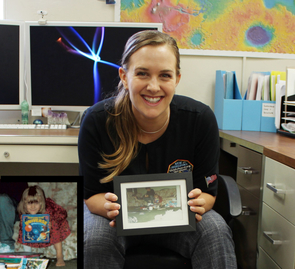 How it all began: Veronica Bray shows a photo of herself when she was 6, holding her "favorite birthday present" – a book about the universe (see inset at lower left). (Photo: Shipherd Reed/UA) 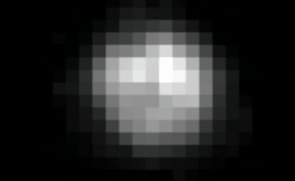 This pixelated, blurry image, taken with the Hubble Space Telescope, is the best view of Pluto that was available before the New Horizons mission. (Photo: HST/NASA)
This image, released on July 8, shows how New Horizons saw Pluto on the previous day, when the probe was less than 5 million miles from the dwarf planet. (Photo: NASA / JHUAPL / SwRI)

In January 1986, as NASA's Voyager 2 space probe flew by Uranus and radioed the first close-up images of the hazy green gas giant back to Earth, a little girl was watching the images on the TV screen, mesmerized.

At the time, Veronica Bray was 5 and had no idea that she would one day join the University of Arizona Lunar and Planetary Laboratory, or LPL, as an associate staff scientist. She didn't even know that the job of a planetary scientist existed. What she did know was that she wanted to do "something spacey with rocks" someday.

"I pictured myself standing in mission control while images were coming down from a world no one had ever seen," she says, "and I was the only one in that room and the first human to see those pictures."

In 1989, Voyager 2 reached Neptune, Bray had turned 8 and her vision had solidified.

"The giant gas planets had caught my attention," she remembers. "I wanted to know, 'Why does Uranus look green? Why does Neptune look blue? What is it that creates that difference?'"

'King of the Kuiper Belt'

Fast forward 25 years, and Bray finds herself as close to fulfilling her childhood dream as she ever will be. As a science team member of NASA's New Horizons mission, Bray is part of what some have called "the final frontier" in solar system exploration. On Tuesday, New Horizons will zip past Pluto, taking the first close-up images of what formerly was known as the ninth planet from the sun but now is officially classified as a dwarf planet.

Scientists such as Bray, however, prefer to refer to Pluto as "King of the Kuiper Belt," and there certainly is nothing small about this mission.

The Kuiper belt is a vast region of space that stretches way beyond the orbit of Neptune and is believed to contain remnants from the formation of the solar system.

Even though the Kuiper belt is often pictured as myriads of chunks tumbling through space, the region consists mostly of empty space.

"The objects are so far apart that they don't impact each other often enough to accrete to form a planet," Bray says.

After spending almost 10 years traversing a 3.7-billion-mile abyss of space that would take more than six millennia to complete in a car driving 65 mph, the New Horizons spacecraft will reach the Pluto system — consisting of the King and five lesser moons known as Charon, Hydra, Nix, Styx and Kerberos — on Tuesday, allowing humankind to watch a fuzzy ball turn into an actual world.

During the two weeks of New Horizons flying through the Pluto system, the science team will gather each morning at the mission headquarters at Johns Hopkins University's Applied Physics Laboratory to make sure the mission gathers as much scientific data as possible. For Bray, the mother of a 4-month-old, this means dialing in every morning at 5 a.m. Arizona time.

In lieu of sufficient NASA funding, Bray was able to join the mission team thanks in large part to a professional development grant funded by LPL. As one of the experts in impact cratering, she will help interpret scans of Pluto's surface for evidence of craters.

"Because I do computer simulations of impacts, I tend to think of the process visually," she says. "I see it happening in my simulations, and that allows me to interpret the shape of crater a bit differently from someone who, say, looks only at images taken of actual craters."

The team will use data from two cameras aboard the New Horizons probe, the Long Range Reconnaissance Imager, or LORRI, and the Multispectral Visible Imaging Camera, or MVIC.

Scientists know that Pluto has water ice and methane ice, and, depending on the time of year, a thin coating of nitrogen ice, which wafts off to become its atmosphere once the dwarf planet travels through the warmer reaches of the solar system on its 248-year trip around the sun.

Asked about what to expect in terms of craters dotting — or missing from — Pluto's icy crust, Bray shrugs and says, "I don't really know, because the impact velocity in the Pluto system is much slower than in the inner solar system."

The farther objects are from the sun, the slower they orbit, Bray explains. Because of that, and because Pluto is small and has weak gravity, objects don't accelerate as much before they hit, resulting in crater-formation dynamics that could be very different from what they are around larger bodies and closer to the sun.

"If there were no, or few, craters on Pluto, it would mean it is active enough to be reshaping itself," says Bray, who has been working with icy craters for a long time, studying them on Earth, the moon, Mars and the icy moons of Saturn. "I'm hoping to see a crater on Pluto that will upset everything we think we know about them."

Already, it's all hands on deck for the New Horizons team, but once the spacecraft begins beaming back data from its encounter with Pluto and its moons, the scientists will scramble to make sense of the incoming information.

"We want to get an idea of the age of the surface units we will see as quickly as possible," Bray says. "We'll compile the image data into a large mosaic, and we'll mark out the different geologic units that we recognize. As soon as we get data from the composition team, we can draw units based on not only what they look like but also what their composition is, and then we will count craters and assign approximate ages to the different parts of the surface."

Once stereo images become available, Bray and her team will be able to create terrain models and measure how deep the craters are, revealing clues about Pluto's surface consistency and how the impact velocity affects the depth of craters.

"I'll be struggling to pull out the information about what made the craters as they are," Bray says. "If there is any subsurface activity, the heat flow will make the craters shallower. Figuring out what makes a crater look like it does is like solving a Rubik's Cube."

Because Pluto and its largest companion, Charon, probably formed during a cataclysmic impact event, Pluto is expected to have leftover heat in its presumed rocky core. That heat, and the heat from radioactive decay of elements in its core, could potentially melt water underneath the dwarf planet's frozen shell, resulting in geysers on the surface. Such cryovolcanism also has been observed on Neptune's moon Triton, a suspected captured Kuiper belt object and currently our best analogy to Pluto.

"Pluto is the last world in our solar system that we have not yet imaged up close," Bray says, "and this time, I can stand in mission control and watch."