Pluto’s "heart" may be cold as ice, but it’s in the right place, according to two UA scientists who believe the dwarf planet’s iconic, heart-shaped region of frozen ice may have shifted its location — and dragged the entire planet with it.
Daniel Stolte
,
University Relations - Communications
March 28, 2016
Resources for the Media 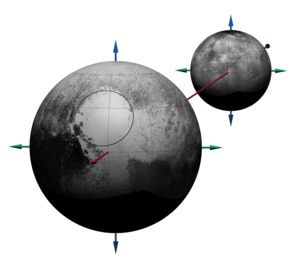 Sputnik Planum, the left lobe of Pluto’s heart, is a vast expanse of mostly frozen nitrogen that lies close to the dwarf planet’s equator — too close to be mere coincidence, two UA planetary researchers suggest. So much ice has piled up here that it could have dragged the entire planet with it and reoriented its spin axis, they think. Charon is seen in the background. (Image: James Keane)
A sea of ice: This is what you would see if you were flying 1,100 miles above Pluto’s equatorial area, looking northeast over the dark, cratered, informally named Cthulhu Regio toward the bright, smooth expanse of icy plains informally called Sputnik Planum. The images making up this composite were taken as New Horizons flew past Pluto on July 14, 2015, from a distance of 50,000 miles. (Image: NASA/Johns Hopkins University Applied Physics Laboratory/Southwest Research Institute)
Separated by 12,200 miles of space, Pluto and Charon form an odd couple, looking nothing like each other. Here the two are shown in a composite of natural-color images taken during New Horizons' flyby. (Image: NASA/Johns Hopkins University Applied Physics Laboratory/Southwest Research Institute)

Pluto is a weird environment, according to James Keane, a doctoral student in the University of Arizona’s Lunar and Planetary Laboratory. And if his latest research results are correct, it just got a whole lot weirder.

On Pluto, seasonal "snowfall" of volatiles — mostly nitrogen gas — is known to accumulate in a region affectionately dubbed "the heart" because of its shape revealed during the flyby of NASA’s New Horizons probe last July. The heart is a low-lying expanse just slightly smaller than Missouri whose official name is Tombaugh Regio, after Clyde William Tombaugh, who discovered Pluto as a 24-year-old working at Lowell Observatory in Flagstaff, Arizona.

Keane and his adviser, Isamu Matsuyama, an assistant professor at LPL, believe they found evidence of that frozen nitrogen pileup throwing the entire planet off kilter, much like a spinning top with a wad of gum stuck to it.

Let’s stop right here to wrap our heads around some of the weirdness that is Pluto, because if we don't, it will be difficult to make sense of the really cool stuff that the two discovered — and that would be a shame.

Weirdness Fact No. 1: Unlike the Earth, whose spin axis is only slightly tilted so that the regions around the equator receive the most sunlight, Pluto is like a spinning top lying on its side. Therefore, the planet’s poles get the most sunlight. Depending on the season, it’s either one or the other, while Pluto’s equatorial regions are super cold, all the time.

Weirdness Fact No. 2: A season on Pluto is an entirely different ballgame from a season here on Earth. Because Pluto is almost 40 times farther from the sun than we are, it takes the little ball of rock and ice 248 Earth years to complete one of its own years. That’s right: If you were a Plutonian born in the winter, summer wouldn’t come around until your great-great-great-grandchildren were born.

"At Pluto's lower latitudes near the equator, it’s nearly minus 400 degrees Fahrenheit," Keane says. "That’s cold enough to turn nitrogen, the gas that you’re breathing in and out all time here on Earth, into a frozen solid."

Now, here’s the really cool part (ha): Over the course of a Pluto year, nitrogen and other exotic gases condense on the permanently shadowed regions, and eventually, as Pluto goes around the sun, those frozen gases heat up, become gaseous again and re-condense on the other side of the planet.

"Each time Pluto goes around the sun, a bit of nitrogen accumulates in the heart," Keane says. "And once enough ice has piled up, maybe a hundred meters thick, it starts to overwhelm the planet's shape, which dictates the planet's orientation. And if you have an excess of mass in one spot on the planet, it wants to go to the equator. Eventually, over millions of years, it will drag the whole planet over."

Wow. Think about that: a planet whose shape and position in space are controlled by its weather, kind of. That’s pretty crazy for a tiny world way, way out there that many thought would not be much more than a dead, frozen rock circling the fringes of our solar system.

Keane and Matsuyama presented their research last week at the 47th Lunar and Planetary Science Conference at The Woodlands in Texas, where it was received with great interest despite the fact that the work hasn’t been peer-reviewed yet.

"I think this idea of a whole planet being dragged around by the cycling of volatiles is not something many people had really thought about before," Keane says.

The two researchers used observations made during New Horizons' flyby and combined them with computer models that allowed them to take a surface feature such as Sputnik Planum, a large ice-filled plain that’s part of Pluto’s heart, shift it around on the planet’s surface and see what that does to the planet’s spin axis. And sure enough, the geographic location of Sputnik Planum is suspiciously close to where you would expect it to be, they found.

"If Sputnik Planum were a large positive mass anomaly — perhaps due to loading of nitrogen ice — then (it) would naturally migrate to the tidal axis as Pluto approaches a minimum energy state," Keane and Matsuyama write.

In other words, the massive accumulation of ice would end up where it causes the least wobble in Pluto’s spin axis.

This phenomenon of polar wander — a planet shifting its spin axis — is something that was discovered with the Earth’s moon and with Mars, as well, but in those cases it happened in the distant past, billions of years ago.

"On Pluto, those processes are currently active," Keane says. "Its entire geology — glaciers, mountains, valleys — seems to be linked to volatile processes. That's different from most other planets and moons in our solar system."

And not only that, the simulations and calculations also predicted that the accumulation of frozen volatiles in Pluto’s heart would cause cracks and faults in the planet’s surface in the exact same locations where New Horizons saw them.

"Before New Horizons, people usually only thought of volatiles in terms of a thin frost veneer, a surface effect that might change the color, or affect local or regional geology," Keane says. "We are saying that this could have a global, planet-moving effect, and this process could have been going on for millions of years."

That the movement of volatiles and shifting ice around a planet could have such a dramatic effect is not something anyone would have predicted before the New Horizons mission, Keane says.

"Many, myself included, might have expected to see a cold, dead frozen rock, but nothing could be further from the truth. We got there, and this thing has everything going on on it — it has tectonics, it has glaciers, it has mountains, it has valleys — and there are a number of smaller-scale features that have striking resemblance to terrestrial features, like mountains that look like the snow-capped Rockies. But those mountains are not shaped by rain and erosion like on Earth, but instead by all this movement of nitrogen ice."

"Amazing" is the word Keane uses to describe the New Horizons mission and the people behind it.

"It’s only because of their insight and dedication over more than two decades that this mission exists," he says, "allowing us to see the unexpected and wonderfully weird world that is Pluto."