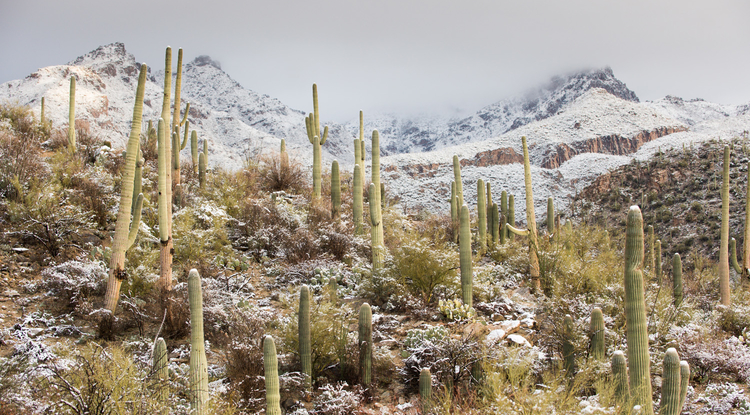 UA researchers who have investigated human responses to climate, whether it be extremely high or low temperatures, say adaptability comes with time. "It's a very complex balance between adaptation and environmental stimulus. The trigger that sets the kinds of responses in motion varies between individuals and between groups, and is something that is often determined over a long time of exposure," said Ole Thienhaus, who chairs the UA Department of Psychiatry. (Photo credit: Jacob Chinn)

Prefer Dry Heat to Arctic Chill? Genetics Might Be the Reason

UA researchers weigh in on how our genes affect our ability to deal with extreme weather – hot or cold.
La Monica Everett-Haynes
,
University Communications
Jan. 8, 2014
Resources for the Media
The belief is that if you hate winters, you might try spending more time in cooler climates to better adjust to those lower temperatures. But because our genetics do shape our weather adaptability, there are no guarantees, says Dr. Brian S. Drummond, medical director for the University of Arizona Medical Center-South Campus. (Photo credit: Sarah Beaudry)

While people in the East and Midwest have been suffering through an intense cold system drifting in from the Arctic, those in the Southwest have been enjoying beautiful, warm weather – and rubbing it in to family and friends in cooler climates by boasting about it on social media.

But much like living in sub-zero temperatures, living in extreme heat presents some of its own challenges. And your ability to cope has much more to do with just an emotional response to temperatures.

University of Arizona experts involved in weather-related research say other factors, such as genetics, play an important role in human climate adaptability. For example, a person's ability to sweat, one's skin pigmentation, the strength of one's heart and even how close one's blood vessels are to the surface of his or her skin are among the factors that determine a person's adaptability.

"If you put two people in an environment with the same stimulus, over time, they will still carry a genetic predisposition. One person's body may change to adapt, but it won't change as much as someone of a different predisposition who does better in that climate," said Dr. Brian S. Drummond, a clinical assistant professor and medical director for the University of Arizona Medical Center-South Campus.

"Think about smoking – some people can smoke for a lifetime and never develop cancer while a person who smokes for five years does," Drummond said.

So, in the midst of variable weather conditions across the nation, a question comes to mind: Can humans actively and naturally become more adaptable to extreme temperatures?

The answer: yes and no. Indeed, it's complicated.

UA researchers agree that the climate can have impacts – ranging from minor to significant – on our bodies, emotions and mood. And existing research indicates it is quite difficult for people to make major adjustments so that their bodies swiftly change to best adjust to extreme temperatures. The reasons vary.

"It's a very complex balance between adaptation and environmental stimulus," said Ole Thienhaus, who chairs the UA Department of Psychiatry. "The trigger that sets the kinds of responses in motion varies between individuals and between groups, and is something that is often determined over a long time of exposure."

Charles L. Raison, an associate professor in the UA Department of Psychiatry, cited recent research out of Australia related to heat intolerance and summer-related depression. "It's not as well known, but it is common for people close to the equator."

In an investigation loosely related to the study in Australia, Raison and members of his research team are exploring the use of high heat – hypethermia – to treat depression.

"Results from our ongoing studies look very promising. The treatment actually seems to make depressed people more heat tolerant in addition to improving their mood," said Raison, also the Barry and Janet Lang Associate Professor of Integrative Mental Health in the John and Doris Norton School of Family and Consumer Sciences in the College of Agriculture and Life Sciences.

"We've known for years that a lot of people with mental illness have trouble with thermal regulation," he said. "From our data here, we know that people with depression tend to run body temperatures higher than average. So being depressed could set you up to not be able to deal well with heat."

And remember the earlier mention of genetics shaping our immediate physiological response to climate and weather-related shifts in our environment?

"Somebody who has been living in North Dakota and Minnesota their entire lives are, in the largest sense, able to take care in cold spells better than someone who moves to Chicago from Tucson," Thienhaus said, emphasizing that this adaptability grows with each generation.

"So, people who live over generations in the Arctic regions presumably have adapted through natural selection, you might say; they have the body type that is better able to handle these temperatures," he said. And they often have adapted in a way that they do not excrete all of the cortisol hormone that results in the depressive episodes common in those suffering from seasonal affective disorder, he added.

Then there is the emotional response.

Perhaps you've heard of seasonal affective disorder – also called seasonal depression. It is a condition where people who receive, among other things, too little sunlight over a period of time often begin experiencing sadness, hibernation behaviors and depressive episodes, Raison said.

So what does all this mean for human climate adaptability in the face of climate fluctuation and extreme weather conditions?

The belief is that if you detest the heat, spending more time in warmer climates may help your body to better adjust over time in the same way that winter-haters would have to spend more time adjusting to cooler climates. But, such changes do not come with guarantees, said Drummond, also an assistant professor in the UA College of Medicine.

"Animals in nature have adapted and evolved greatly over time to extreme environments," he said. "But we haven't subjected ourselves to the same conditions, because we've been living in our air-conditioned and heated homes. We haven't adapted our bodies to the changes in the same way."

He offers another solution: Move to your climate of choice.

"Being in a climate you enjoy will probably benefit you in your emotional state much better than not. Maybe you even like being cold, and your body doesn't, but it is still likely that you will be happier," Drummond said.

"Evolutionally, we are adapting and over time, our bodies will slowly start to adapt if the planet starts slowly warming. We will eventually have ways to concentrate our urine better and manage our thirst response," he also said. "But the hard part is with the weather extremes. It's harder for our bodies to manage because it is a different response when we go from one extreme to the next."