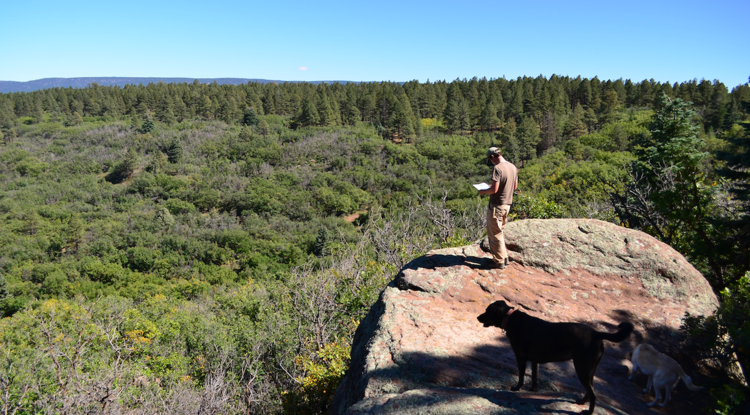 This patch of oak shrub surrounded by forest is the result of an 1899 forest fire in northern New Mexico. Researchers suggest such changes from forest to shrubby, hard-to-walk-through vegetation will become more common as global warming continues. (Photo: Ellis Q. Margolis) 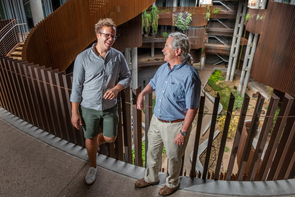 The world’s vegetation has changed since the last ice age. The map on the left shows the changes in plant species and the map on the right shows changes in structure such as tundra becoming forest. The darker the squares the greater the change. (Image: Connor Nolan)

As the last ice age came to an end and the planet warmed, the Earth’s vegetation changed dramatically, reports a University of Arizona-led international research team in the journal Science.

The current warming from climate change may drive an equally dramatic change in vegetation within the next 100-150 years unless greenhouse-gas emissions are reduced, the team wrote.

"We found that ecosystems all over the globe experienced big changes," said Connor Nolan, a doctoral candidate in the UA Department of Geosciences. "About 70 percent of those sites experienced large changes in the species that were there and what the vegetation looked like."

The researchers used their analysis of how vegetation changed after the last ice age to project how much current ecosystems could change in the 21st century and beyond as global warming progresses.

The analysis required synthesizing information from published reports for 594 sites covering every continent except Antarctica. Nolan said the study is the most comprehensive compilation of vegetation and other ecological data covering the period from the height of the ice ages 21,000 years ago to the pre-industrial era.

The regions of the world that had the biggest temperature increases since the ice age also had the greatest changes in vegetation, the team found.

Knowing the relationship between temperature change and the degree of vegetation change allowed the researchers to determine how ecosystems might change under various greenhouse-gas emissions models.

"We used the results from the past to look at the risk of future ecosystem change," Nolan said.

"We find that as temperatures rise there are bigger and bigger risks for more ecosystem change."

The Earth warmed 7-13 degrees F (4-7 degrees C) since the last ice age. Climate change projections indicate the world will warm about that much "in the next 100-150 years if greenhouse-gas emissions are not reduced substantially," the authors write.

The changes would threaten global biodiversity and derail vital services that nature provides to humanity, such as water security, carbon storage and recreation, according to study co-author Jonathan Overpeck, dean of the School for Environment and Sustainability at the University of Michigan.

"If we allow climate change to go unchecked, the vegetation of this planet is going to look completely different than it does today, and that means a huge risk to the diversity of the planet," Overpeck said.

The idea for the study originated with Jackson, who is also an adjunct professor in the UA Department of Geosciences. He thought the warming since the end of the ice ages 14,000 years ago had caused significant changes in vegetation all over the globe and realized his idea was testable using evidence from ancient pollen and plant fossils—paleoecological data—that could show how vegetation had changed.

He and Overpeck, then a UA professor of geosciences, developed the study and enlisted researchers from all over the globe for help and data. UA’s Nolan did the bulk of the analysis.

The team used previously published research that calculated how the temperature changed from the ice ages to the pre-industrial era for sites throughout the globe.

For each of the sites, the authors enlisted experts to determine whether the degree of vegetation change since the ice ages was low, moderate or large. That created a common framework for comparing the various records.

The experts classified more than 67 percent of the vegetation changes as high and at least another 26 percent as moderate. The changes were especially pronounced in the mid-to-high latitudes in North America, Europe and South America—regions that were most heavily glaciated and therefore had warmed the most since the ice ages.

However, the warming projected for the 21st century and beyond will occur much, much faster, he said.

"We’re talking about the same amount of change in 10 to 20 thousand years that’s going to be crammed into a century or two," he said. "Ecosystems are going to be scrambling to catch up."

As one example, he said forests in the Western U.S. devastated by wildfires might not grow back with the same species that had been there.

"You take the ponderosa pine forests in the Sky Islands and turn it into oak scrub—we’re starting to see that," Jackson said.

The paper by a 42-author international team, "Past and future global transformation of terrestrial ecosystems under climate change," is scheduled for publication in the August 31 issue of the journal Science.

The National Science Foundation, the U.S. Department of the Interior Southwest Climate Adaptation Science Center, the Russian Academy of Sciences and the Russian Foundation for Fundamental Research funded the research.