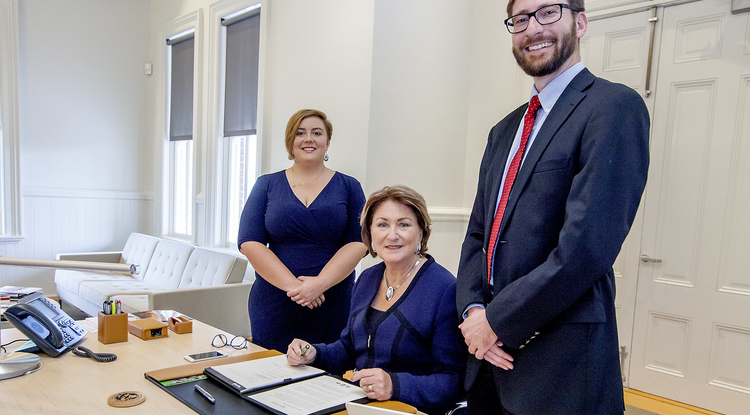 In response to growing concerns that global changes in the climate are projected to have more severe and damaging effects, the UA has signed a commitment to reduce carbon waste and help drive environmental vitality.
University Relations - Communications
Oct. 5, 2015
Resources for the Media
Extra Info:

An interdisciplinary group at the UA, the Art-Environment Network, is exploring issues related to climate change with the purpose of promoting environmental resiliency. 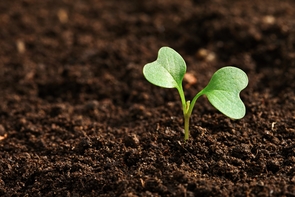 The UA and other higher-education institutions have signed a commitment to identify and implement solutions to reduce the risks associated with climate disturbance. 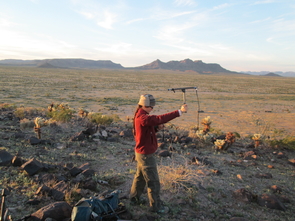 Researchers in 2013 published a report in the Journal Science of the Total Environment naming the UA the No. 1 university in the U.S., and second in the world, for environmental science research. UA Carson Scholar Stephanie Doerries conducts radio telemetry, scanning for frequencies of radio-collared pronghorn from the southern Okie Hills in the Barry M. Goldwater Range. (Photo: David Kuhn) 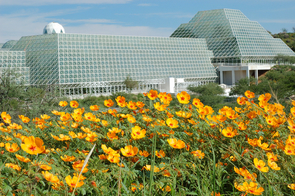 The UA-run Biosphere 2 is home to the first experiments able to reproduce complex natural systems that control how water flows through the ground and also how gases circulate in the Earth's atmosphere. 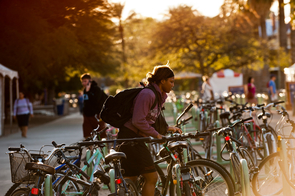 The UA takes a multitiered approach to sustainability, which includes the advancement of scholarly research, community outreach and campuswide green initiatives, including the encouragement of alternative modes of transportation.
In 2011, internationally known environmental scientist Diana Liverman, co-director of the UA Institute of the Environment, and the Dalai Lama discussed ways in which human activities are changing the global environment and risking Earth's capacity to sustain life.

In an expansion of the University of Arizona's commitment to building a sustainable future, UA President Ann Weaver Hart has signed a nationwide, solution-oriented pledge to increase the reduction of the institution's carbon waste while contributing to initiatives meant to drive environmental vitality.

The UA is one of fewer than 50 higher-education institutions across the nation that are pre-signers of Second Nature's Climate Commitment, which was initiated in response to growing concerns that climate change around the globe will have stronger negative effects into the future. On Monday, Second Nature announced the pre-signers and the addition of a new commitment, the Resilience Commitment.

"Building upon decades of important research in environmental sciences that have had global impact, the University of Arizona is committed to actively supporting resiliency in our environment," Hart said.

"The UA is also committed to teaching students tools and ways of thinking that are critical for environmental stewardship," Hart said. "This dual responsibility — studying and being sensitive to changes within our various ecologies and training the next generation of environmentally minded professionals — is particularly important in the context of the UA's land-grant mission."

In 2007, the UA signed the American College and University Presidents' Climate Commitment, promising to track its greenhouse gas emissions and reduce its carbon footprint.

Hart's signing represents a continuation of that earlier commitment and marks a new investment in efforts to enhance campus resilience through the Resilience Commitment.

One aspect of the Resilience Commitment is to integrate resiliency teachings into curricula, research and campus operations, educating and training an ethical and prosperous civil society, according to Second Nature. Already, the UA offers nearly 500 courses — and also full degree programs — on environmental studies and sustainability that address timely issues.

"I'm proud to be part of a university that takes climate leadership seriously, as an academic leader and as a leader in Tucson and in Arizona," said Ben Champion, director of the UA Office of Sustainability.

Also with the signing, the UA commits to a three-year process to develop and implement a resiliency assessment. The University will then implement an action plan for adapting to the changing climate. Plans already are underway to work closely with the city of Tucson's Climate Change Advisory Committee, a group that advises Tucson Mayor Jonathan Rothschild and city council members on community-wide climate change planning. Through the partnership, the UA will help provide solutions to challenges associated with climate change in Tucson while modeling ways that institutions can prepare for other changes and future conditions.

"Signing the Climate Commitment is just one way the UA is working to shape a sustainable future through teaching, research and partnership," Hart said, "and I am very pleased to be part of this national effort."

The signing builds on the UA's nationally and internationally regarded strengths in climate research, outreach and education, and also its efforts to train the next generation of climate scientists and leaders. Such strengths stem from the work of:

Researchers also have investigated ways climate change impacts the economy and other parts of our everyday lives.

Earlier this year, Derek Lemoine, assistant professor of economics in the UA Eller College of Management, co-developed a new statistical framework that makes it possible to understand just how much climate change could impact markets across the globe. Lemoine collaborated with Sarah Kapnick, physical research scientist for the National Oceanic and Atmospheric Administration at the Geophysical Fluid Dynamics Laboratory. Their paper, "A Top-Down Approach to Projecting Market Impacts of Climate Change," was published in Nature Climate Change.

On its main campus, the UA has greatly enhanced its built environment to be more environmentally responsive and responsible, and it has influenced others to do the same. This summer, the Pac-12 Conference office announced that it officially had joined the Green Sports Alliance, following the lead of conference institutions such as the UA.

Several other UA buildings are being vetted. The new Environment & Natural Resources Phase 2 was built with a sustainable future in mind and is positioned to become the greenest building on campus.

Among the student body, undergraduate and graduate students increasingly have become involved in sustainability initiatives on and beyond campus.

In the 2014 Student Sustainability Survey, more than 70 percent of students who responded said they support improving the environment through sustainable building and landscaping choices on campus. Administered by the UA's Division of Student Affairs and Enrollment Management, Academic Initiatives & Student Success, the survey results also indicated that the vast majority of students surveyed find it important to conserve water, recycle, minimize waste and conserve energy.

One such student-led group is Compost Cats, which works with campus and community partners to collect organic waste to produce and sell compost. Earlier this year, Rothschild and city council members approved an agreement to provide $66,000 a year in funding over the next three years to expand the composting program more broadly across Tucson.

In March, the UA held its first Zero Waste Basketball Game, participating in a national competition among universities implementing diversion and recycling programs at some of the largest events on their campuses. The UA's first Zero Waste Football Game is scheduled for Nov. 14.

Champion said the zero waste initiatives are part of "a large and growing partnership" involving his office and Arizona Athletics, Facilities Management, Students for Sustainability's Greening the Game team, Compost Cats, ZonaZoo, the Arizona Student Unions, the Residence Hall Association and others.

Such initiatives contribute to the University's nationwide reputation as a green campus. Earlier this year, The Princeton Review named the UA as one of the best higher-education institutions in the nation for undergraduate education, also rating the University highly in sustainability in "The Best 380 Colleges: 2016 Edition."

"I am especially proud that the University is engaging our students in the pursuit of solutions to the wicked problems posed by climate change," Champion said. "The University is working to make sure that the next generation of professionals is prepared to launch their careers as leaders toward a resilient and sustainable society."