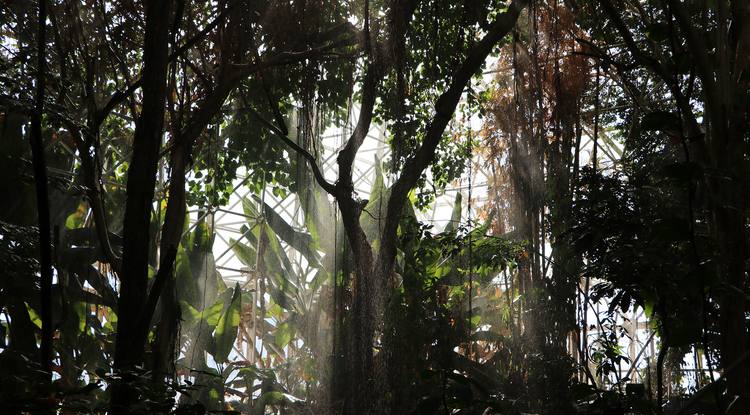 'Rainforest Under Glass' Kissed by Rain After Two-Month Drought

An unparalleled experiment underway at Biosphere 2 forced the “hottest tropical rainforest in the world” through a controlled drought and recovery experiment to paint a clearer picture of how global climate change will affect Earth’s ecosystems.
Rosemary Brandt
,
College of Agriculture and Life Sciences
Dec. 16, 2019
Resources for the Media 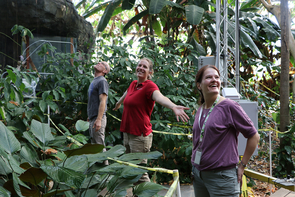 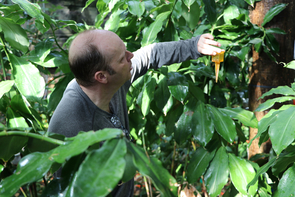 In the sprawling Southern Arizona desert an hour’s drive north of Tucson, the sun peeked through the 90-foot canopy of tropical trees as researchers turned the main water valve and released what would amount to 12,000 gallons of water – the first rain in more than two months for the 30-year-old rainforest at Biosphere 2.

The event late last week marked the pinnacle of an unprecedented four-month project designed to simulate a full ecosystem drought and recovery, one that researchers hope will help paint a clearer picture of how a hotter, drier future will impact the world’s rainforests.

“This is the hottest tropical rainforest in the world, making it an ecosystem laboratory for studying how forests respond to the combined pressures of warming and drought,” said Laura Meredith, rainforest science director for Biosphere 2 and one of three leads on the international project.

“We are attempting to monitor from top to bottom – from soils to canopy – the resiliency and vulnerability of plants, microbes and their interactions to environmental stress,” added Meredith, an assistant professor in the School of Natural Resources and the Environment and member of the BIO5 Institute and Institute of the Environment.

The Water, Atmosphere, and Life Dynamics, or B2 WALD, experiment bridges borders in the ever-pressing challenge to understand the implications of global climate change. Fueled in part by a $2.1 million European Research Council grant secured by Christiane Werner, a professor of ecosystem physiology at Germany’s University of Freiburg, the B2 WALD project brings together 80 scientists and equipment from 13 institutions across the globe.

“We have joined a fully interdisciplinary team to cover all aspects from hydrology, vegetation, soil and atmospheric science,” Werner said.  “However, implementing such an enormous ecosystem-scale manipulation experiment was only possible with an incredible motivated team of young researchers working without breaks throughout the last month and the full support from the B2 staff on site.”

As the climate changes and temperatures rise, the fate of rainforests is more important than ever. Rainforests play one of the most significant roles in the Earth's carbon cycle, largely regulating the levels of greenhouse gases in the atmosphere.

“We do know that global climate change is progressing. We don’t understand how ecosystems are going to behave,” said Joaquin Ruiz, vice president of global environmental futures at the University of Arizona. “Rainforests are important for two reasons. One, they store a fair amount of carbon, and you don’t want that carbon pumped into the atmosphere. And the second is they are home to enormous biodiversity.”

The rainforest at Biosphere 2, which houses 90 plant species across an area the size of seven tennis courts, is a unique tool researchers are harnessing to bridge the gap between what they can do in the lab and what they observe in the field.

“There’s no other place in the world where you can encapsulate a rainforest, subject it to a drought and then bring it out of that drought on a schedule that you dictate,” said John Adams, deputy director of Biosphere 2. “This gives scientists a really unique opportunity to have everything well poised so they can monitor and collect data that oftentimes is very difficult or impossible to get in the field."

Prior to shutting off the rain this fall, researchers set out to capture every bit of data possible. Nearly 2 miles of Teflon tubing and more than 133 sensors were placed throughout the forest to simultaneously collect measurements on everything from carbon pools in the atmosphere and vegetation to microbiome and deep-water soil processes.

“We want to know how drought changes the speed of carbon cycling in forest ecosystems. Additionally, we want to understand how plants and microbes choose to ‘spend’ their carbon in drought versus non-drought periods,” Meredith said. “The plants in the Biosphere 2 rainforest are all individuals living in different terrain, light and moisture conditions, so we ask these questions from the standpoint of understanding how individual plants contribute to the response of an entire ecosystem to drought, capturing this complexity in controlled ecosystem science.”

Since September, the research team has been running what can only be described as a non-stop “science-athon,” working around the clock to engineer, maintain and monitor more than 423 measurement points throughout the enclosure.

As the rainforest readjusts to rain, the marathon continues. Researchers will track system changes throughout the rainforest’s recovery, after which the real work begins – mulling through the data.

The project has gathered more than three terabytes of atmospheric gas data to date.  Bonnie Hurwitz, an assistant professor of biosystems engineering and member of the BIO5 Institute who is helping the B2 WALD team with cyberinfrastructure, put it in perspective: “Three terabytes of data is equivalent to 20 million 100-page books, which is more than the 16 million books housed in the Library of Congress.”

And that will likely be a fraction of the amount of data generated on soil metabolomics and genomics, not to mention processed data sets and modeling to come.