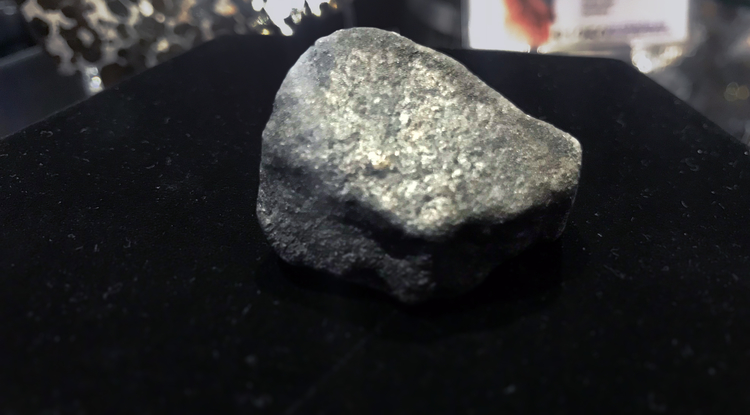 Rapid Detection and Recovery: The Science of Hunting Meteorites

UA professor Vishnu Reddy is leading a NASA-funded project to find freshly fallen meteorites like the one in Michigan last month.
Emily Walla
,
NASA Space Grant Intern, University Communications
Feb. 6, 2018
Resources for the Media
Composite image of weather radar signatures of the falling meteorite (Image: Marc Fries)
Computed strewn field of the meteorite. The dark orange shows where the largest, heaviest pieces of the meteorite fell, and the yellow shows where the lightest and smallest pieces fell. (Image: Marc Fries)

At 8:10 p.m. on Jan. 16, hundreds of people in Michigan reported the bright glow of a meteor streaking through the sky, rattling windows as it broke the sound barrier. The meteor then broke apart in the Earth's atmosphere, and its pieces rained quietly to the ground.

Using predictions by the Rapid Detection and Recovery of Meteorites, or RADARMET, project, scientists and meteorite hunters were able to recover more than half a dozen fragments of the rock within two days of the fall.

RADARMET is led by Vishnu Reddy, assistant professor in the University of Arizona's Lunar and Planetary Laboratory. He procured funding from NASA to operate RADARMET, which uses National Weather Service Doppler radar data and computer models to locate meteorites within hours of their fall.

"Historically, people would see a meteor in the sky and they would say, 'I saw it go that way behind the tree,'" Reddy said. "Even if someone takes a picture of the meteor, using the image to trace a trajectory for the meteorite is difficult and can be quite time-consuming."

Upper-atmosphere winds make extrapolation challenging, Reddy said. For a meteor to survive the trip through the atmosphere and fall onto the ground as a meteorite, it has to slow from its cosmic velocity. The friction from the atmosphere makes the meteor glow visibly between 30 and 65 miles above ground.

"Typically, meteorite-dropping meteors need to slow down to around 6,700 mph, the speed when they no longer glow brightly while descending into the atmosphere," Reddy said.

The meteor then enters a period known as "dark flight," during which it falls at terminal velocity. During this dark flight, winds in the upper atmosphere can buffet the meteorite miles away from where its glowing bright flight ends.

Marc Fries, Reddy's co-investigator for RADARMET and a scientist at NASA's Johnson Space Center, developed a method that can predict how a meteorite would travel during its dark flight. He also has developed software tools to calculate where meteorites land under the influence of winds, and to estimate the total mass that reaches the ground.

Tanner Campbell, a UA graduate student in aerospace and mechanical engineering, adapted Fries' dark flight model into a computer program that quickly and accurately determines where a meteorite will fall.

"We can accomplish this because the kinetics of an object in near freefall are known quite well," Campbell said. "Since these meteorites are typically fairly small, we can make some assumptions about how they travel through the atmosphere. We can then take whatever data can be gathered on the meteorite while it is glowing in the sky, and measured atmospheric data from near the event, and use it to predict the path to the ground."

Atmospheric data include wind speeds and information collected by weather radar stations, which detect anything falling through the air, whether it is rain, birds, airplanes or meteorites. Although the radar cannot distinguish between a sparrow and a space rock, the RADARMET team has a method to do just that.

"The first trigger is eyewitness reports from the public," Reddy said.

Using an online tool on the American Meteor Society website, members of the public can log their location, which direction they were facing and how long the meteor was visible in the sky. When an event has corroborating videos and other evidence such as sonic booms, Reddy and his co-investigators download radar data from the nearest weather station and power up the dark flight model.

Accuracy of Location Is Vital

Within hours of the event, the RADARMET team can locate the exact area where meteorite fragments have fallen. The information is quickly shared with the public, including scientists and meteorite hunters. RADARMET's method is so accurate that hunters have been able to travel to a location, park their cars and find meteorites within that parking lot.

When hunting meteorites, time is of the essence. The sooner a sample is found, the more scientists can learn from it.

"The longer a meteorite sits on the Earth, the less scientifically useful it becomes, because the weathering process degrades the minerals and destroys it," Reddy said.

Rain can dissolve and wash away minerals, microbes can contaminate any evidence of the building blocks of life, and oxygen can rust the iron in the meteorite within a day.

Although recovering pieces of the Michigan meteorite took slightly more than a day, some samples were found in nearly pristine condition. One piece was found in ice, protected from exposure to liquid water. Pristine samples such as this one enable scientists to study materials that are easily destroyed or of astrobiological significance.

Reddy and students in the UA Department of Planetary Sciences plan to be involved in the study of the meteorite.

"While we're not out there hunting the meteorites, we're doing the science," Reddy said.