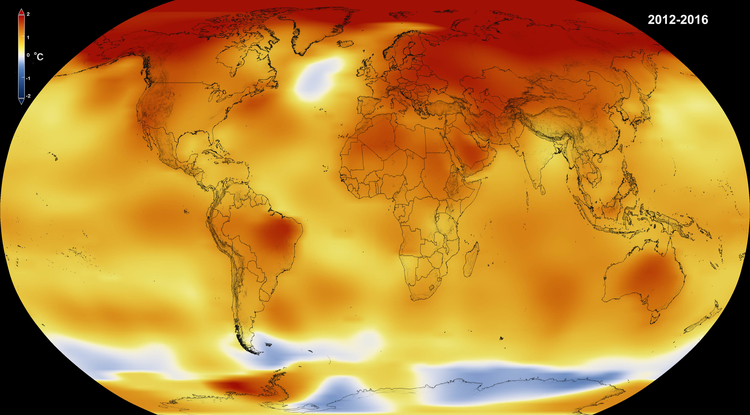 2016 was the third year in succession to set a new record for global average surface temperatures. (Image: NASA)

Heat generated by greenhouse gas emissions and stored in the Pacific Ocean was released by the 2015-2016 El Niño, UA geoscientists found.
Mari N. Jensen, UA College of Science, and Jim Erickson, University of Michigan
Jan. 24, 2018
Resources for the Media

Global surface temperatures surged by a record amount from 2014 to 2016, boosting the total amount of warming since the start of the last century by more than 25 percent in just three years, according to new University of Arizona-led research.

"Our paper is the first one to actually quantify this jump and identify the fundamental reason for this jump," said lead author Jianjun Yin, a UA associate professor of geosciences.

By analyzing global temperature records, Yin and his colleagues found that by the end of 2016, the global surface temperature had climbed an additional 0.43 degrees F (0.24 C).

Co-author Jonathan Overpeck said, "As a climate scientist, it was just remarkable to think that the atmosphere of the planet could warm that much that fast."

The spike in warming from 2014 to 2016 coincided with extreme weather events worldwide, including heat waves, droughts, floods, extensive melting of polar ice and global coral bleaching.

The new research shows that natural variability in the climate system is not sufficient to explain the 2014-2016 temperature increase, said co-author Cheryl Peyser, a UA doctoral candidate in geosciences.

In the current paper, the researchers also projected how frequent such big temperature spikes would be under four different greenhouse emission scenarios. Record-breaking temperature jumps and the accompanying extreme weather events will become more frequent unless greenhouse gas emissions decline, the team found.

Figuring out the mechanism for the temperature spike built on previous work by Peyser, Yin and others.

The earlier work showed that although the Earth's surface warming had slowed from 1998 to 2013, heat from additional atmospheric greenhouse gases was being sequestered in the Pacific Ocean. The strong 2015-2016 El Niño roiled the ocean and released all the stored heat, causing a big jump in the Earth's surface temperatures.

The research paper, "Big Jump of Record Warm Global Mean Surface Temperature in 2014-2016 Related to Unusually Large Oceanic Heat Releases," by Yin, Overpeck, Peyser and Ronald Stouffer, a UA instructor in geosciences, is online in the journal Geophysical Research Letters. Overpeck is dean of the School for Environment and Sustainability at the University of Michigan, Ann Arbor.

The Visiting Scientist Program of Princeton University, the National Oceanic and Atmospheric Administration and the National Science Foundation funded the research.

In early 2017, Yin and Overpeck were having lunch at Wilko, a restaurant near the UA campus, and Yin mentioned how fast the globe was warming.

Overpeck said, "I knew it was warming a lot, but I was surprised at how much it warmed and surprised at his insight into the probable mechanism."

The two scientists began brainstorming about expanding on Peyser's and Yin's previous work.

The researchers analyzed observations of global mean surface temperatures from 1850 to 2016, ocean heat content from 1955 to 2016, sea level records from 1948 to 2016 and records of the El Niño climate cycle and a longer climate cycle called the Pacific Decadal Oscillation — 15 different datasets in all.

Increase in Greenhouse Gases Was Key

Although some release of heat from the Pacific Ocean is normal during an El Niño, the researchers found much of the heat released in 2014-2015 was due to additional warming from increases in the amount of greenhouse gases in the atmosphere.

Yin said, "The result indicates the fundamental cause of the large record-breaking events of global temperature was greenhouse-gas forcing rather than internal climate variability alone."

The researchers also projected how often a 0.43 F (0.24 C) global temperature increase might occur in the 21st century depending on the amount of greenhouse gases emitted worldwide between now and 2100. The team used four representative concentration pathway, or RCP, models that project future climate change between 2006 and 2100.

For the low-emission RCP scenario in which greenhouse gas emissions peak by 2020 and decline thereafter, temperature jumps of at least 0.43 F (0.24 C) might occur from zero to one time in the 21st century, the team found.

For the highest-emission RCP scenario in which greenhouse gas emissions rise unabated throughout the 21st century, spikes of record warm temperatures would occur three to nine times by 2100. Under this scenario, such events would likely be warmer and longer than the 2014-2016 spike and have more severe impact.

The world is on track for one of the higher emission scenarios, Peyser said.

Adapting to the increases in the frequency, magnitude and duration of rapid warming events projected by the higher emission scenario will be difficult, the scientists write.

School for Environment and Sustainability