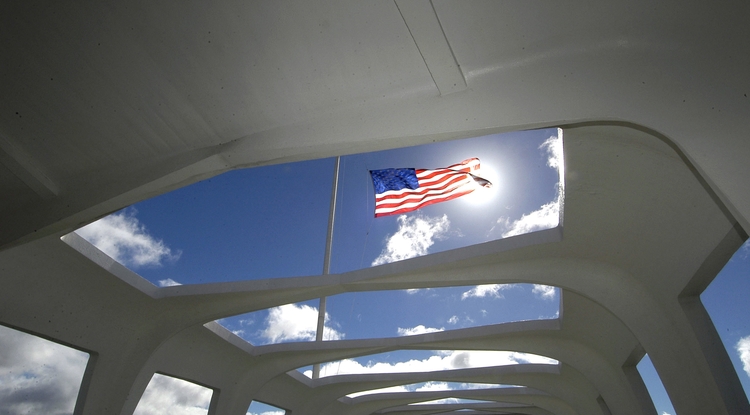 To recognize the UA's ties to the USS Arizona and the 75th anniversary of the attack that sealed U.S. participation in World War II, University affiliates are hosting or participating in several programs and events.
La Monica Everett-Haynes
,
University Relations – Communications
Aug. 15, 2016
Resources for the Media

Various University of Arizona departments and programs are hosting events to commemorate the 75th anniversary of the attack on Pearl Harbor, which included the destruction of the USS Arizona, the American battleship to which the UA has close ties.

Dec. 7, 2016, marks the anniversary of "a date which will live in infamy," in the words of then-U.S. President Franklin D. Roosevelt. The attack eventually propelled the United States into World War II.

Leading up to the hallmark date, UA-related events include:

"The Life and Legacy of the USS Arizona"

Special Collections, at the Main Library, has one of the largest collections of USS Arizona materials in the world. The collection will host a signature exhibition honoring the 1,177 USS Arizona crewmen and officers who gave their lives in the line of duty during the attack on Pearl Harbor.

The extensive USS Arizona collection, which has been created primarily from donations of individuals associated with the battleship during her 26-year life, is the source of content for the exhibition, "The Life and Legacy of the USS Arizona," which opens on Aug. 29.

The exhibition will remain open through Dec. 23, featuring original photographs that document the USS Arizona's personnel and operational history. Other materials on display will be papers, scrapbooks, documents and memorabilia, such as the ship's newspaper, official Navy documents and crew correspondence. Also included will be oral histories with men who served on the ship and papers from the USS Arizona Reunion Association.

"The USS Arizona: A Living Memorial"

In conjunction with the Special Collections exhibition is a Sept. 13 talk by James Delgado, director of Maritime Heritage in the Office of National Marine Sanctuaries, titled "The USS Arizona: A Living Memorial."

The UA football team will hold a remembrance as part of its Sept. 17 home game against Hawaii in Arizona Stadium. The game begins at 7:45 p.m. USS Arizona survivor Lauren Bruner is expected to attend. Bruner, who is 95, joined the U.S. Navy in 1938 and reported to USS Arizona the following year.

Later in the fall, the basketball team will make a visit to the USS Arizona Memorial while in Hawaii for a game against Michigan State on Nov. 11 as part of the Armed Forces Classic. During the trip, the team will have the opportunity to learn more about the attack on Pearl Harbor and the USS Arizona's place in history.

Susan Crane, a UA associate professor of history, will join Special Collections director Steve Hussman for a discussion about the importance of memorials. Crane's research focuses on the role of memorials in both remembering and forgetting aspects of major events. Hussman will explain how archivists preserve materials and their contribution to research, cultural preservation and community legacy. The Nov. 3 event will be held from 6 to 8 p.m. at Special Collections.

Gallagher Theater, in the Student Union Memorial Center, will host a film series, showing movies that explore Pearl Harbor and the Battle of Iwo Jima. Each will start at 6 p.m.:

Plans are underway to build the USS Arizona Mall Memorial, which is being funded with private donations.

The installation on the UA Mall will have an open-space design with a full-scale outline of the deck that includes bronze medallions inscribed with the names of the 1,177 who were killed while onboard the USS Arizona. The memorial will serve as a complement to the artifacts already located at the Student Union, including a bell from the USS Arizona and the items exhibited in the Memorial Lounge.

Fundraising continues for the memorial, and donations can be made online.

The USS Arizona Mall Memorial is scheduled to be dedicated during a remembrance ceremony in December. A firm date and details are pending.