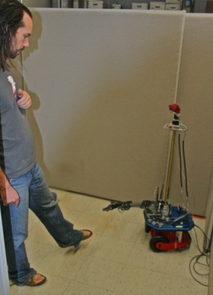 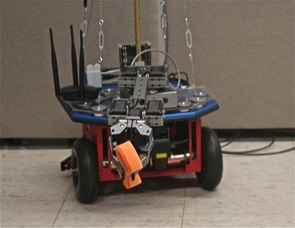 Ian Fasel said that in building self-teaching robots, researchers can learn much more about the naturally occurring behaviors in humans, such as why young children often are constantly exploring the world.

But robots have no concept of self, nor do they truly understand what it is they are programmed to do, said Ian Fasel, an assistant research professor of computer science at the University of Arizona.

As a consequence, robots often are unable to problem solve – a design and implementation glitch that is driving Fasel's research.

He recently earned grant funding to advance his robotics work, which is focused on improving what robots are able to understand and learn, but without the aid of human programming.

"The prevailing technique for recognizing objects is for someone to collect a large database of examples – cars, pedestrians, faces," Fasel said. "It's a lot of work to find a lot of good examples and to prepare them in a learning algorithm."

The $250,000 grant – his first as a new faculty member – came from the Defense Advanced Research Projects Agency, or DARPA, to fund "CLIME: Concept Learning from Intrinsically Motivated sensory-motor Experience."

The CLIME project involves training robots to learn concepts from trial and error in the world, whereas a second project teaches robots that already have some human-programmed concepts to seek out new information as efficiently as possible.

In effect, Fasel and his team are engineering a robot system that can teach concepts to itself, instead of requiring a human to program them in, as it learns how to interpret and control its sensors and motors.

"A lot of our language (as human beings) is metaphorical," Fasel said. "The argument we're making is if the robots can understand sensory and motor concepts, they won't make dumb mistakes when we try to talk to them."

Fasel also is collaborating with a team from Texas on another project, "Active Learning for Sequential Sensing and Efficient Human Interaction in Collaborative Human-Robot Teams," which the U.S. Office of Naval Research is funding for three years at nearly $600,000.

Fasel is a subcontractor and co-principal investigator on the grant, which is part of a larger effort led by collaborators at the University of Texas at Austin and Texas Tech University.

"Further in the future, the real goal is for them to teach themselves commands," he said. "We really do want robots in which they learn commands to help humans interact with them."

Fasel and his colleagues also are training robots able to detect emotion in their human counterparts – all with little or no programming.

Such work in enhancing artificial intelligence in robots is an increasingly visible area in computer science.

In 2003, Sony created "QRIO," a bipedal robot that recognizes voices and faces, which was subsequently featured in a music video by the popular music artist, Beck.

Other humanoid robotic models have been designed using recognition technology to comprehend certain movements, gestures and sounds and also to act as companions.

If at this point you cannot stop thinking about science fiction films such as Star Wars, Artificial Intelligence and I-Robot – just try. While filmmakers have long displayed robotic characters and technologies seemingly out of this world, most are tremendously difficult and time consuming to try and replicate, Fasel said.

Also, much of the actual advancement in robotics has been driven by researchers feeding robots with algorithms that provide step-by-step explanations for processes and tasks and robots learning via computation.

Fasel's approach is to determine less exhausting and time-consuming ways to teach robots.

"In real-world applications, it would literally be some kind of unmanned aerial vehicle that needs to understand its flyover area," Fasel said. "Or, imagine if you had a household robot. It needs to know what it is, where it is and where objects belong."

"What we want to do is learn about their behaviors as well," Fasel said. "Another part is understanding apparent curiosity in infants in constantly exploring the world."