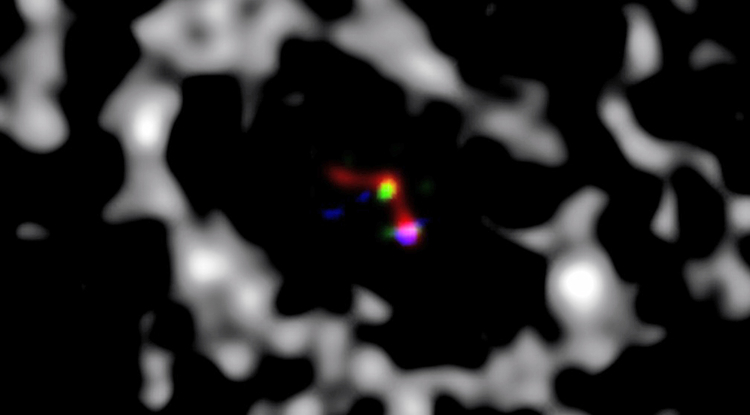 A composite image of LkCa15 shows the MagAO data, in blue, and the LBT data, in green and red.

Researchers Capture First Photo of Planet in the Making

UA scientists developed instruments and techniques that made imaging possible of a planet residing in a gap in LkCa15's disk.
Robin Tricoles
,
University Relations – Communications
Nov. 18, 2015
Resources for the Media

There are 450 light-years between Earth and LkCa15, a young star with a transition disk around it, a cosmic whirling dervish, a birthplace for planets.

Despite the disk’s considerable distance from Earth and its gaseous, dusty atmosphere, University of Arizona researchers captured the first photo of a planet in the making, a planet residing in a gap in LkCa15’s disk.

Of the roughly 2,000 known exoplanets — planets that orbit a star other than our sun — only about 10 have been imaged, and that was long after they had formed, not when they were in the making.

"This is the first time that we’ve imaged a planet that we can say is still forming," says Stephanie Sallum, a UA graduate student, who with Kate Follette, a former UA graduate student now doing postdoctoral work at Stanford University, led the research.

"No one has successfully and unambiguously detected a forming planet before," Follette says. "There have always been alternate explanations, but in this case we've taken a direct picture, and it's hard to dispute that."

The researchers' results were published in the Nov. 19 issue of Nature.

Only months ago, Sallum and Follette were working independently, each on her own Ph.D. project. But serendipitously they had set their sights on the same star. Both were observing LkCa15, which is surrounded by a special kind of protoplanetary disk that contains an inner clearing, or gap.

Protoplanetary disks form around young stars using the debris left over from the star’s formation. It is suspected that planets then form inside the disk, sweeping up dust and debris as the material falls onto the planets instead of staying in the disk or falling onto the star. A gap is then cleared in which planets can reside.

"The reason we selected this system is because it’s built around a very young star that has material left over from the star-formation process," Follette says. "It’s like a big doughnut. This system is special because it’s one of a handful of disks that has a solar-system size gap in it. And one of the ways to create that gap is to have planets forming in there."

Sallum says researchers are just now being able to image objects that are close to and much fainter than a nearby star. "That’s because of researchers at the University of Arizona who have developed the instruments and techniques that make that difficult observation possible," she says.

Those instruments include the Large Binocular Telescope, or LBT, the world’s largest telescope, located on Arizona’s Mount Graham, and the UA’s Magellan Telescope and its adaptive optics system, or MagAO, located in Chile.

Capturing sharp images of distant objects is difficult thanks in large part to atmospheric turbulence, the mixing of hot and cold air.

"When you look through the Earth’s atmosphere, what you’re seeing is cold and hot air mixing in a turbulent way that makes stars shimmer," says Laird Close, UA astronomy professor and Follette’s graduate adviser.

"To a big telescope, it’s a fairly dramatic thing. You see a horrible-looking image, but it’s the same phenomenon that makes city lights and stars twinkle."

Josh Eisner, UA astronomy professor and Sallum’s graduate adviser, says big telescopes "always suffer from this type of thing." But by using the LBT adaptive optics system and a novel imaging technique, he and Sallum succeeded in getting the crispest infrared images yet of LkCa15.

Meanwhile, Close and Follette used Magellan’s adaptive optics system MagAO to independently corroborate Eisner and Sallum’s planetary findings. That is, using MagAO’s unique ability to work in visible wavelengths, they captured the planet’s "hydrogen alpha" spectral fingerprint, the specific wavelength of light that LkCa 15 and its planets emit as they grow. In fact, almost all young stars are identified by their hydrogen alpha light, says Close, principal investigator of MagAO.

When cosmic objects are forming, they get extremely hot, Close says. And because they’re forming from hydrogen, those objects all glow a dark red, which astronomers refer to as H-alpha, a particular wavelength of light. "It’s just like a neon sign, the way neon gas glows when it gets energized," he says.

"That single dark shade of red light is emitted by both the planet and the star as they undergo the same growing process," Follette says. "We were able to separate the light of the faint planet from the light of the much brighter star and to see that they were both growing and glowing in this very distinct shade of red."

A color so distinct, Close says, that it’s proof positive a planet is forming — something never seen before now.

"Results like this have only been made possible with the application of a lot of very advanced new technology to the business of imaging the stars," says professor Peter Tuthill of the University of Sydney, one of the study’s co-authors, "and it’s really great to see them yielding such impressive results."