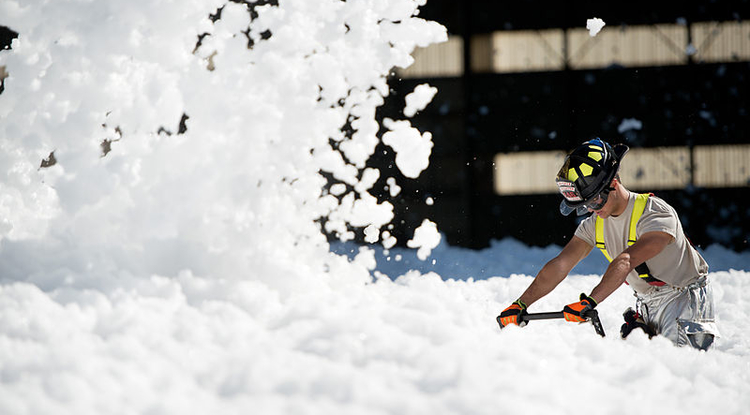 A senior airman blows a small sea of fire retardant foam that was unintentionally released in an aircraft hangar at Travis Air Force Base in California on Sept. 24, 2013. Firefighting foams such as these are now known to contain PFAS, which don't break down in the environment or body. (U.S. Air Force photo/Ken Wright/Released)

Synthetic chemicals that were released into the environment for the first time 80 years ago have been linked to harmful health effects, and more of them are migrating slowly from the soil, according to University of Arizona research.
Mikayla Mace
,
University Communications
Feb. 11, 2020
Resources for the Media 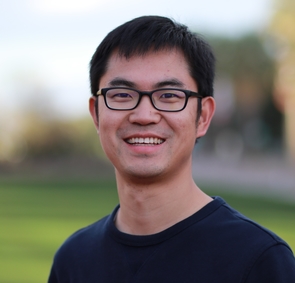 A growing health crisis fueled by synthetic chemicals known as per- and polyfluoroalkyl substances, or PFAS, in groundwater has garnered much attention in the last few years.

The reported levels could be "just the tip of the iceberg," as most of the chemicals are still migrating down slowly through the soil, according to Bo Guo, University of Arizona assistant professor of hydrology and atmospheric sciences.

Nearly 3,000 synthetic chemicals belong to the PFAS class. They have been used since the 1940s in food packaging, water-resistant fabrics, non-stick products, pizza boxes, paints, firefighting foams and more, according to the Environmental Protection Agency.

The chemicals don't break down in the environment or in the body, and a growing number of research papers have shown that PFAS contamination in water sources is widespread in the United States and that exposure is harmful to health.

"Because PFAS are in a lot of consumer and industrial products, they can get into wastewater. Treatment plants are not designed to treat these compounds, so these chemicals just stay in that water to get reused. It's sprayed on soccer fields or used to recharge aquifers, for example," said Mark Brusseau, professor of environmental science. "PFAS can also get into the biosolids, which are land-applied as fertilizer, so there are all these sources, which means they could have entered the environment at many different time periods and repeatedly."

To understand how the chemicals migrate through the soil between the land surface and groundwater – an area called the vadose zone – University of Arizona researchers developed a novel mathematical model to simulate the different complex processes that affect the transport and retention of these chemicals.

Their findings are published in the journal Water Resources Research.

Their model showed that the majority of PFAS chemicals accumulate in places where air contacts the surface of water trapped in the soil, which significantly slows the chemicals' downward march to groundwater. The researchers found that the chemicals will move even more slowly than expected through coarse-grain soils than fine-grain soils.

"This means that the majority of PFAS are still in the soil, and they are migrating down slowly in a way similar to a ticking time bomb," said Guo, the study's lead author.

Previous observations showed that PFAS chemicals were moving slowly through the soil before reaching the groundwater, but no one understood why. The model defines the mechanisms behind the extremely slow migrations seen in the field.

"This has big implications for focusing remediation," Guo said. "So far, groundwater has been the focus, but should we actually focus on soil, which is where most of the PFAS are and will be for a long time? Or do we wait and remediate the groundwater for decades or centuries?"

The model can work for any of the PFAS chemicals, but the researchers specifically simulated PFOS, or perfluorooctanesulfonate, which is commonly found in firefighting foam and is of primary concern.

"One of our objectives in the future would be to apply the model to different sites," said, Brusseau, who co-authored the study with Guo and Jicai Zeng, a postdoctoral researcher in Guo's group. "Then hopefully it will be useful for policy makers, regulators, environmental consultants to do assessments."