In a year, the University "will have a robust and inspirational strategic plan that will provide the road map for the future," the president told the Arizona Board of Regents.
University Communications
Nov. 17, 2017
Resources for the Media 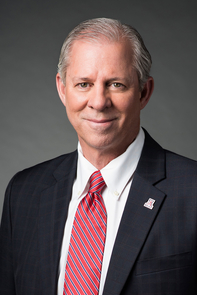 A strategic planning process designed to position the University of Arizona as a major player in a world dominated by the convergence of the physical, biological and digital sciences was launched Friday by UA President Robert C. Robbins in a presentation before the Arizona Board of Regents.

Robbins, who became the UA's 22nd president on June 1 after five years as president and CEO of Texas Medical Center, identified what he sees as the University's strengths and challenges. At this time next year, the UA "will have a robust and inspirational strategic plan that will provide the road map for the future," he said.

The UA's standing as a top-tier research university and its strengths in the arts and humanities, science and technology, interdisciplinary study and student engagement will serve as a springboard for its next phase, Robbins said. He said special attention will be paid to student enrollment, retention and graduation rates and also to elevating research activity and productivity. Other goals include increasing philanthropic support, building on successes in tech transfer and telling the UA's story "more widely and with stronger impact," he said.

The strategic planning process, Robbins told the regents at the UA's annual Operational and Financial Review, will be "broadly inclusive."

"The backdrop for our strategic planning is the worldwide influence of the convergence of the physical, biological and digital sciences, known as the Fourth Industrial Revolution," Robbins said. "We're in the right place at the right time for preparing our students. We have a lot to offer the world."

Robbins said the Fourth Industrial Revolution is different from the previous revolutions — mechanistic, electric and digital — because of its unprecedented fusion of technologies.

"The impacts will be felt in all human endeavors and at all levels of our lives: the global economy, businesses, our society, nations and communities, and the individual," he said.

The UA's partnership with Banner Health is already paying dividends, Robbins said, citing the Precision Medicine Initiative, which resulted in the largest National Institutes of Health grant ever awarded in Arizona ($43.3 million over five years).

"The UA would not have earned this grant without its partnership with Banner Health," he said, adding that he is committed to the University's two medical schools in Phoenix and Tucson. "The next leader for the UA Health Sciences will play a major role in advancing this partnership, and the search for that senior vice president is well underway."

Robbins said the University's commitment to the student experience was validated by a recent Gallup poll showing that nine of 10 UA alumni say their education was worth the cost. The UA also is trending upward in its retention and six-year graduation rates.

Robbins said his goal is for the UA to rise in the U.S. News & World Report rankings to the top 100 universities overall and the top 50 among public institutions in the next five years. He said he has been encouraged by what he has heard from UA students, faculty, staff and alumni during his first months on the job, describing them as "dedicated" and "passionate."

The UA is at a critical juncture in its 132-year history, Robbins said.

"We have to look at the world around us and where we are going," he said. "Any good strategic plan is responsive to the context in which it sits. And this plan will set us on a path for the next 10 to 20 years."

"It's a demanding time for the UA, and Dr. Robbins had to get into things the University does well and also ones it can improve," Ridenour said. "The UA isn't waiting. It's making changes right away. Next year, we'll have a full plan in place."