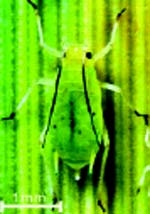 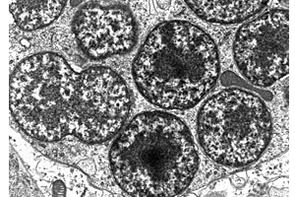 Electron micrograph of Buchnera bacteria living insidean aphid cell. The bacteria are the dark round cells. The bacterium at theleft has started to divide to form two cells." (Photo: Joshua White) 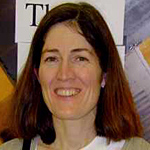 The adage holds true for an unlikely subject -- the genetic material of bacteria living inside aphids, those squishy green insects you can't keep out of your garden -- according to a pair of University of Arizona evolutionary biologists.

Regents' Professor Nancy Moran and her former post-doctoral associate, Jennifer Wernegreen, say that the bacteria, called Buchnera, have chromosomes that have remained practically unchanged for over 50 million years, making them the world record holders for genome stability over time.

The UA biologists and their colleagues at the University of Uppsala, in Sweden, reported their findings in the June 28, 2002 issue of the journal Science.

Buchnera, which are related to the common intestinal bacteria, E. coli, have worked out a nice living arrangement with aphids. Aphids feed on the nutrient-laden sap that flows through plants, but the sap lacks some of the amino acids and vitamins essential for the aphids' diets. The bacteria manufacture these missing nutrients themselves and supplement the sap for the aphids. In return, the aphids share their hard-earned plant sap and provide a cozy place for the bacteria to livetheir own innards.

It's such a mutually beneficial partnership that neither the bacteria nor the aphids can survive without each other, Moran said. Every mother aphid dutifully infects all of her eggs with a healthy dose of the bacteria. The two species have been living and evolving together this way for over 200 million years.

Maybe these bacteria have had it a bit too cushy though. In evolution, the rule is "use it or lose it." Being so well kept by their aphid benefactors, the Buchnera haven't had to do a lot for themselves. As a result, they've lost most of the genes that their ancient free-living ancestors hadgenes to provide for many of life's essentials, such as nourishment, movement, and protection from a harsh environment. Modern day Buchnera has only about 550 genes, about a tenth the number of genes E. coli has.

Some of the genes Buchnera gave up are the ones that help chromosomes to evolve.

The order and spacing of genes on a chromosomewhat molecular biologists term "genome architecture"evolve much the way words, sentences, and paragraphs evolve in an overly word-processed essay. Those cut, copy, and paste commands come in handy when you compose a paper on a computer. Move this paragraph over here, that section over there. Chop a sentence, flip some clauses, ax a few words. Get a little overzealous with that drag-and-drop, though, and soon your composition has become a mere patchwork of your first draft.

Over eons, Moran says, the same sort of thing normally happens to the enormously long DNA molecule that forms chromosomes. Genes get shuffled and reshuffled, copied, and deleted. But Buchnera long ago got rid of the very genesthe "cut, copy, and paste buttons"that allow this genomic word processing to go on. As a result, the Buchnera genome is stuck in the same draft from somewhere between 50 and 70 million years ago.

Moran, Wernegreen, and their team discovered this by comparing the entire genomes of two varieties of Buchnera to each other. One variety lives in aphids that feed on pea plants, the other in aphids that sip wheat sap. According to the fossil record, the two aphid relativesand their bacterial tenantsdescended from a common ancestor between 50 and 70 million years ago, and have been evolving separately ever since.

The complete genome sequence from the pea variety had already been published, and Moran's Swedish partners determined the genome sequenceall 641,454 basepairsof the wheat variety. When Moran's team compared the DNA from the two bacterial cousins, their genome architectures looked essentially identical. The expected signs of shuffling, cutting, copying, or pasting weren't there.

While the order of the words and sentences in the bacterial genomes was identical, there were still some differences in the DNAtypos, of sorts. Point mutationschanges of individual letters that spell out the genetic instructionsappear to be as common in Buchnera as in other bacteria. Some point mutations are benign, but some can wipe out genes as effectively as a complete erasure. This happened to several Buchnera genes.

The Buchnera that live in the pea-eating aphids manufacture their own sulfur-containing nutrients, because pea plant sap lacks the sulfur nutrients bacteria need for a proper diet. Making the sulfur compounds requires instructions from a set of five genes. Moran's team found that in the Buchnera from the wheat-eating aphids, all of these genes were destroyed by point mutations. Wheat sap, it turns out, contains plenty of digestible sulfur, so those bacteria don't have to make their own. Another case of "use it or lose it."

Moran ponders whether 50 million years of genome stability may have produced a stale marriage between Buchnera and aphids. A little gene shuffling is the spice of life, and can provide some innovation into the way an organismor a team of organismsdeals with new ecological challenges. Perhaps this odd couple is fated to 50 million years, or more, of the same old thing.