Scanning the Brain for Impending Error 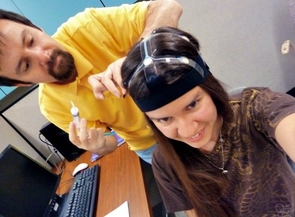 Federico Cirett, a doctoral student in the UA computer science department, can predict within about a 20 second period and with consistent accuracy when a person will make a mistake on a standardized math exam. (Photo credit: Federico Cirett)

Our bodies and brains tend to give us good cues about when we are becoming stressed, fatigued or overwhelmed.

But what if, with near exact precision, you could predict when heightened levels of fatigue were about to cause you to make a mistake?

Cirett had been working on the Animal Watch tutoring program with Carole Beal, a professor in the UA's School of Information: Science, Technology and Arts, or SISTA.

Noticing English language learners were having more difficulty answering problems, Cirett set out on an investigation for his dissertation work.

"There are so many things going on where students may be getting distracted, but it wasn't clear," said Cirett, a computer science department student working on his dissertation. "So, I thought to measure brain states of students as they were working on the material."

Measuring the activity, Cirett was able to detect with 80 percent accuracy whether a student – all of them university students – would answer a question incorrectly about 20 seconds after they began the question.

The findings have important implication for students and educators, said Beal, also Cirett's adviser and collaborator.

With the findings, Beal and Cirett co-authored "EEG estimates of engagement and cognitive workload predict math problem solving outcomes." The paper has since been accepted for presentation during the User Modeling, Adaptation and Personalization conference to be held in Montreal, Canada in July.

"He's done this great project, and his contribution is applying this research to education," said Beal, who has spent years developing AnimalWatch, a Web-based tutoring system centered on algebra readiness.

But how is this done?

During his work on AnimalWatch, Cirett said he noticed that the English language learners – the majority of them who spoke Spanish as their primary language – seemed to be having a more difficult time answering problems than did their primarily English-speaking peers.

Cirett found that the students performed at comparable levels on the math problems, but the English learners stumbled a bit. "It was the language barrier."

Mexico-born Cirett, who came to the UA to study alongside his wife, spoke with Beal about using the EEG technology, which she had employed in the past.

For his research, which was partially funded by the National Science Foundation, Cirett employs a headset developed by the San Diego-based Advanced Brain Monitoring Technologies, which is generally used to monitor high-stress and fatigue in military personnel.

"Some of it is pre-programmed," Beal said, noting that the technology and algorithms had already been designed.

"But what Federico did was to look at these patters to create a classification," Beal said. "His algorithm is much better than chance and it's much better than knowing the number of correct answers people typically get on the exam."

With its nine sensors, the device records information about individual attention levels and cognitive workload as they completed multiple-choice math questions, some easy; some hard. For instance, the measurements were directly correlated to how engaged students were in their work and how they felt in the process.

During the study, students also reported on feelings of frustration and their perceived difficulty of the math problems. Cirett analyzed the data to try and figure out if the EEG data specific to students' attention levels and their cognitive workload could predict when they would answer a question with the correct answer.

Though his research involved college students, Cirett intends for his work to inform efforts to improve tutoring programs, especially for English language learners.

Cirett and Beal point to developments over the last decade in intelligent tutoring systems, those modeled after human behavior, which have resulted in more adaptive systems.

But what Cirett wants to see are intelligent educational technologies that would intervene at important moments in students' learning, aiding them in ways an educator might not.

The end goal, he said, is to optimize learning at the individual level, especially in the area of math, an increasingly important subject.

"There are different ways to solving this problem," Cirett said.

"But if we can detect when they are going to fail, maybe we can change the text or switch the question to give them another one at a different level of difficulty, but also to keep them engaged," Cirett said. "Brain wave data is the nearest thing we have to really know when the students are having problems."