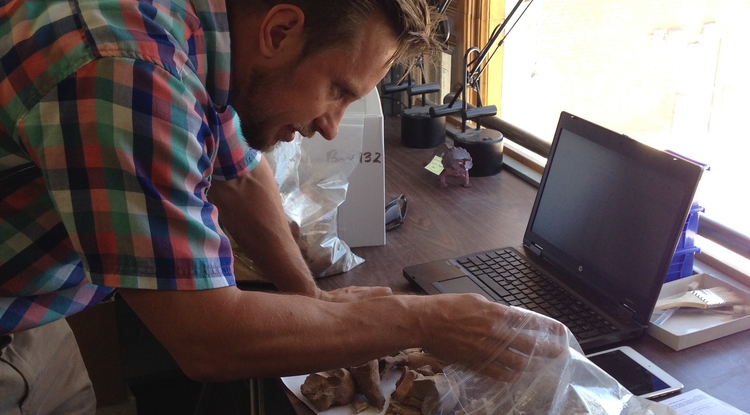 Schoolteacher Bones Up on Anthropology at UA

Alex Ruff takes the skills he learns in a UA lab back to his high school forensic science classes.
Alexis Blue
,
University Relations - Communications
July 23, 2015
Resources for the Media

Ruff takes what he learns in UA labs and incorporates it into lessons in his high school classroom.

In a small lab, surrounded by the skeletons of thousands of animals, Alex Ruff sifts through bags of teeth that chewed their last meal centuries ago.

The Marana High School science teacher is looking for answers about what cows, sheep and goats were eating and drinking in southern Arizona after Spanish missionaries first introduced the animals to the area in the late 1600s.

Ruff is a recipient of the Arizona Partners in Science Award from the Tucson-based Research Corporation for Science Advancement. Given to about 50 recipients between 2009 and 2013, the awards provided summer research opportunities for high school science teachers in partnership with faculty at Arizona universities.

Ruff's two-year award has allowed him to team up with UA anthropologist Barnet Pavao-Zuckerman and UA anthropology graduate student Nicole Mathwich to study livestock teeth and bones from the mid-1700s to the early 1800s, collected from a variety of southern Arizona sites over the years.

Ruff is conducting the bulk of his research at the Arizona State Museum's Stanley J. Olsen Laboratory of Zooarchaeology, which houses about 4,500 animal skeletons from across North America. Much of what he learns in the lab, he works to incorporate in his high school classrooms during the school year to help his students get excited about science.

This summer, Ruff is working with UA researchers to conduct isotopic analysis on livestock teeth. The researchers will drill into the enamel and extract samples from the teeth. Those samples will be run through a mass spectrometer to determine their chemical composition, which will provide information about the animals' food and water sources in the 18th and 19th centuries in an area where water was scarce.

The goal is ultimately to reconstruct Native American ranching practices of the past in southern Arizona.

"We want to reconnect what we're doing with cattle now to what the natives were doing with the animals when they were first incorporated," Ruff said. "Water management is the most crucial thing here. How did the natives manage their water usage with these animals, and is there something we can learn and do now that would be similar?"

For Ruff, a 2006 UA graduate, the partnership with the UA has been an opportunity to learn new skills and participate in activities that are far removed from his day job. Last summer, for example, he had the unique opportunity to in an archaeological excavation of the Tohono O’odham settlement of Guevavi, just north of the U.S.-Mexico border.

Ruff's work at the UA also has provided him with new tools to use in his classes at Marana High, just outside of Tucson, where he teaches biology and forensic science.

Ruff started the school's forensic science courses in an effort to "catch the 'CSI' wave," using the popular television show to get students interested in science. His work in the UA's zooarchaeology lab fits in well with his courses.

Since he started his work at the UA, he has brought animal bones from the Arizona State Museum's collections into his forensic science classes to teach students what they can learn from bones, such as how bones grow and what that can reveal about an animal's age.

The bones even inspired a "wing night" assignment in which students were tasked with analyzing the remains from a hot-wing dinner to determine how many unique chickens contributed to the meal.

Ruff also has brought some of his students into the UA lab for tours.

"They like it because it's hands-on," he said. "They can actually see the bones and see how bones grow."

Pavao-Zuckerman, Ruff's mentor and associate curator of zooarchaeology at the Arizona State Museum, said Ruff's enthusiasm has been wonderful to see.

"Working with Alex has been amazing. He's so grateful to be here, and so excited and motivated," said Pavao-Zuckerman, an associate professor in the UA School of Anthropology. "To be able to get involved in research like this is something high school teachers don't often get to do, and they should."

Ruff said partnering with the UA, and being able to connect his students with the campus through his research, has been a welcome opportunity. He hopes to publish his research findings and to present them in his classes as well as at the Research Corporation for Science Advancement's conference in January.

"To be a science teacher and to be able to get out of the classroom and work out in the field like this is really cool," he said.