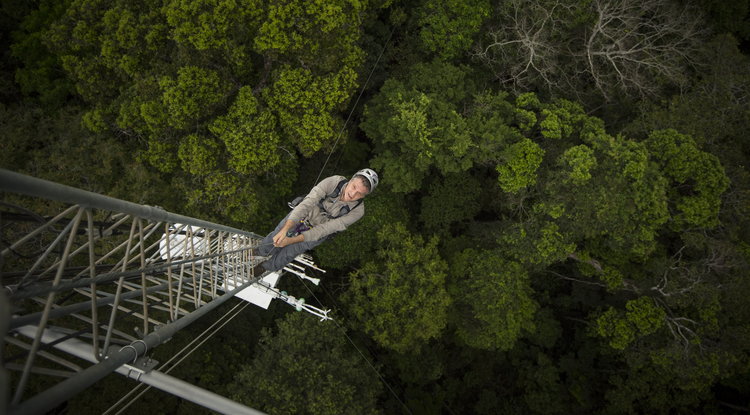 Neill Prohaska, a UA doctoral student in the Department of Ecology and Evolutionary Biology, studies the Amazon with Scott Saleska, an associate professor in the department, and other researchers. As increases in global temperatures unleash ecological and meteorological mayhem around the planet, understanding how this iconic biome works has become more important than ever. (Photo: Corey Rich)

Scientist Examines the 'Lungs of the Planet' in Amazon Region

The rainforest contains clues that can help scientists diagnose the implications of Earth's changing vital signs.
Daniel Glick
,
bioGraphic
May 22, 2017
Resources for the Media
Extra Info:

Read more about the work of Scott Saleska, and others, in the full bioGraphic feature "The Lungs of the Planet." 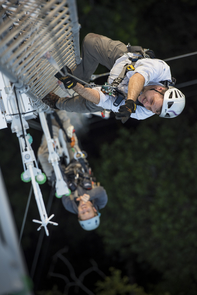 High above the rainforest canopy, UA scientists Scott Saleska (in foreground) and Neill Prohaska, a UA doctoral student, ascend a 220-foot-tall flux tower in the middle of their study site. Sensors on the tower measure the carbon dioxide and water vapor that flow into and out of the forest. (Photo: Corey Rich) 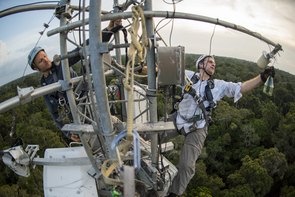 Late one afternoon last October, Scott Saleska encountered a weirder-than-usual welcome to the remote Brazilian research station to which he had been coming for 17 years to study how the Amazon rainforest breathes.

Arriving at the base of a 220-foot flux tower that juts up through the rainforest canopy, he clipped his climbing harness to a galvanized steel safety cable and started up. Dragging electronic replacement parts in a haul bag, Saleska rose rung by rung on his way to troubleshoot two malfunctioning sensors clamped high on the triangular structure, which measures just 18 inches wide on each side, and rises like a vertical proboscis above the teeming green forest.

The dry season was normally in full force by now, but when Saleska reached the pinnacle of the jungle lightning rod, he saw a portentous gray wave crashing toward him, targeting the galvanized steel spire on which he stood. Fearing a lightning strike like one that recently had fried some of the tower's instruments, Saleska scrambled down and unclipped his harness just as a monsoon-quality downpour swamped the research station with an hours-long tropical deluge.

The unseasonable storm was just the first punch in Saleska's latest bout of Amazon fieldwork, an endeavor comprised of equal parts logistics, groundbreaking science, and gambiarra, a Brazilian Portuguese word that means essentially what MacGyver does when he improvises his way out of thorny situations with his beloved Swiss army knife and a roll of duct tape.

The primary aim of Saleska's research is to assess the implications of the climate dilemma we're in — essentially, to chart the Amazon's respiratory state — using significantly more sophisticated tools than MacGyver ever had: sonic anemometers for micro-meteorological measurements, spectroradiometers to gauge leaf age, and hand-held porometers that measure the rate of water evaporating from the surfaces of individual leaves.

Saleska has chosen this place to do his work because the world's largest contiguous rainforest contains clues that can help scientists diagnose the implications of Earth’s changing vital signs. By taking various measurements of the jungle's life-sustaining functions, such as the water loss and carbon uptake of individual leaves during photosynthesis, and cross-referencing on-the-ground measurements of leaf production against satellite imagery, Saleska and his many collaborators are creating a detailed portrait of the Amazon's biogeochemical functions — as Saleska puts it, "from the leaf to the landscape."

This ecological research station in the Tapajós National Forest in northern Brazil has been literally instrumental in helping Saleska and his multinational colleagues explore three vital and interrelated scientific questions:

Climate scientists can now project with confidence that an increasingly warmer world will produce more extreme weather patterns that have the potential to dramatically affect the life cycle of tropical forests. Higher temperatures are likely to dry out some parts of the rainforest and contribute to more frequent droughts and catastrophic wildfires. Disturbed forests that have been logged, or forests such as the Tapajós that already are relatively dry because of their location, may experience increased stressors on tree health that reduce those forests' ability to absorb CO2.

The question is: How, and by how much?

Among Saleska's surprising findings are indications that this part of the Amazon rainforest tends to "green up" and continue to absorb carbon dioxide even during the dry season — in fact, the trees here absorb more carbon in the dry season than in the wet season.

One implication for this is that the forest may be more resilient than previously thought in the face of at least some of the changes climate scientists and ecologists predict as the planet warms. That's the good news.

In order for that to happen, however, the Amazon rainforest has to survive widespread land clearing as well as the rising temperatures that are projected to reach levels by the end of the century that the region hasn't seen in 10 million years. Exactly where is the tipping point at which climate change would cause the forest to become a source instead of a repository, or sink, of atmospheric carbon? That's a question Saleska and his collaborators are trying to answer.