Scientist's Camera Sees Artwork Down to Its Underdrawings 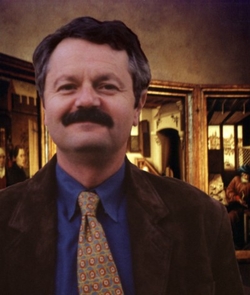 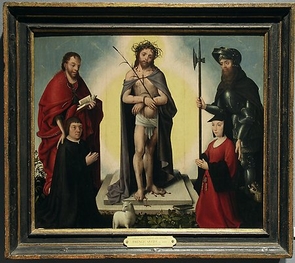 (Click to enlarge) This Renaissance painting, titled "The Man of Sorrows with Saints and Donors," is one of the first that Charles Falco photographed with his relatively inexpensive IR camera. See what his camera revealed in the photo below. 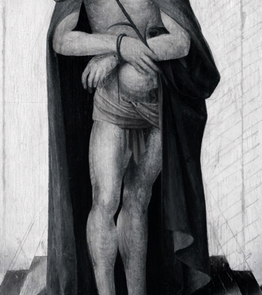 (Click to enlarge) The lines in this underdrawing show up in a detail of a Renaissance painting titled "Man of Sorrows with Saints and Donors." The lines apparent in the infrared converge to a well-defined vanishing point, showing that this particular artist understood the laws of geometrical perspective. UA scientist Charles Falco discovered the lines using an infrared camera he made from a commercial digital SLR.

A scientist at the University of Arizona in Tucson has modified a commercial 8-megapixel digital SLR camera for infrared use, creating an inexpensive, portable new tool that even amateur photographers can use to quickly see through layers of paint in artwork to reveal drawings, defects or other features on the original canvas.

Conservators have been using infrared, or IR, cameras to examine and document artwork since the late 1960s. "But these cameras can cost upwards of $100,000, so the number of paintings studied by this technique has been extremely limited," said UA optical sciences and physics Professor Charles M. Falco.

‘The technique is based on the fact that many common pigments are partially transparent to infrared light, making it possible to use appropriate infrared sensors to capture important information from surfaces that are covered by layers of paint," he said.

Early last year, Falco – an experimental physicist who has been interested in photography and in art since childhood – had an idea that he thought might work.

He realized that modern digital cameras use silicon sensors sensitive to the germane infrared wavelengths and that such cameras might be modified to capture high-resolution infrared photographs – or "IR reflectograms" – of works of art.

For about another $450, Falco converted the camera by removing the infrared-blocking filter and replacing it with a visible-blocking filter, thereby allowing only IR light to reach the camera's sensor. He also adjusted the electronics so that the autofocus feature automatically offsets the camera lens to bring infrared light into sharp focus.

Then he began visiting museums to photograph art.

In a little over a year, Falco has tested his system under a variety of conditions in a dozen museums on three continents, including the National Gallery of Art in Washington, D.C., the State Hermitage Museum in St. Petersburg, Russia, and the National Museum of Western Art in Toyko, Japan.

The first paintings Falco studied were in the Samuel H. Kress Collection at the University of Arizona Museum of Art. Among these works is a painting titled "The Man of Sorrows with Saints and Donors." It was painted by an unknown French artist, probably sometime between the years 1525 and 1550.

"My camera let me discover something about that painting that nobody knew existed - that there are guide lines under the paint that the artist used to create the pedestal in perfect perspective," Falco said. "These lines reveal that this Early Renaissance artist understood and based his drawing on the constructed laws of perspective."

Next, at the Indianapolis Museum of Art, Falco had the chance to test his camera on the same three paintings that conservators had recently analyzed using a $100,000 IR camera.

"So you can have at least half the information about these artworks that is revealed in the IR for $2,000, versus having no information at all because you can't afford the $100,000 camera," he said.

On his visit to Japan's National Museum of Western Art last December, Falco photographed about 100 artworks that interested him in less than two hours.

"I just walk up to a wall where the painting is on exhibit and take its picture. Even in subdued museum lighting, I can handhold the camera to get a good IR image at 1/30 of a second."

He added, "I probably now have more IR reflectograms in my computer than have been taken in total during the entirety of the last 40 years."

Editors of the "Review of Scientific Instruments" invited Falco to write a technical description of his high-resolution imaging instrument and published the paper as the cover story of their July 2009 issue. The paper, titled "High resolution digital camera for infrared reflectography" is published online.

Falco will give invited lectures on the camera and its applications at the University of Washington in January, at an international conference on digital image processing in Singapore in February and at the meeting of the American Physical Society in Portland, Ore., in March.

Falco's work is based on a collaboration with the artist David Hockney and on image analysis research funded by the Army Research Office.