The Mars Reconnaissance Orbiter is managed by the Jet Propulsion Laboratory, a division of the California Institute of Technology, for NASA's Science Mission Directorate in Washington.

Lockheed Martin Space Systems, Denver, built the spacecraft. The Context Camera is operated by and was provided by Malin Space Science Systems. The Johns Hopkins University Applied Physics Laboratory led the effort to build the Compact Reconnaissance Imaging Spectrometer for Mars and operates it in coordination with an international team of researchers. 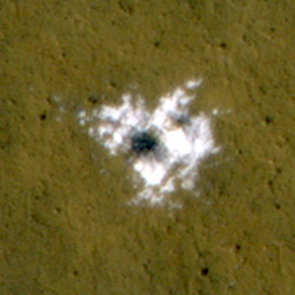 The HiRISE camera took this image of a new, 8-meter (26-foot)-diameter meteorite impact crater in the topographically flat, dark plains within Vastitas Borealis, Mars, on Nov. 1, 2008. The crater was made sometime after Jan. 26, 2008. Bright water ice was excavated by, and now surrounds, the crater. This entire image is 50 meters (164 feet) across.

(Click to enlarge) Earlier and later HiRISE images of a fresh meteorite crater 12 meters, or 40 feet, across located within Arcadia Planitia on Mars show how water ice excavated at the crater faded with time. The images, each 35 meters, or 115 feet across, were taken in November 2008 and January 2009.

Scientists are seeing sub-surface water ice that may be 99 percent pure halfway between the north pole and the equator on Mars, thanks to quick-turnaround observations from orbit of fresh meteorite impact craters on the planet.

"We knew there was ice below the surface at high latitudes of Mars, but we find that it extends far closer to the equator than you would think, based on Mars' climate today," said Shane Byrne of the University of Arizona, a member of the High Resolution Imaging Science Experiment, or HiRISE, which runs the high-resolution camera on NASA's Mars Reconnaissance Orbiter.

"The other surprising discovery is that ice exposed at the bottom of these meteorite impact craters is so pure," Byrne said. "The thinking before was that ice accumulates below the surface between soil grains, so there would be a 50-50 mix of dirt and ice. We were able to figure out, given how long it took that ice to fade from view, that the mixture is about one percent dirt and 99 percent ice."

In August 2008, the orbiter's Context camera team examined their images for any dark spots or other changes that weren't visible in earlier images of the same area.  Meteorites usually leave dark marks when they crash into dust-covered Mars terrain.

The HiRISE team, which bases its operations at the UA Lunar and Planetary Laboratory, followed up in September 2008 by taking high-resolution images of the dark spots.

"We saw something very unusual when we followed up on the first of these impact craters," Byrne said, "and that was this bright blue material poking up from the bottom of the crater. It looked a lot like water ice. And sure enough, when we started monitoring this material, it faded away like you'd expect water ice to fade, because water ice is unstable on Mars' surface and turns directly into water vapor in the atmosphere."

A few days later that September, the orbiter's "CRISM" team used their Compact Reconnaissance Imaging Spectrometer for Mars and got the spectral signature of water ice exposed in one of the impact craters, further clinching the discovery.

"All of this had to happen very quickly because 200 days after we first saw the ice, it was gone, it was the color of dirt," Byrne said.  "If we had taken HiRISE images just a few months later, we wouldn't have noticed anything unusual. This discovery would have just passed us by."

Byrne and 17 co-authors are reporting the findings in the Sept. 25 edition of the journal Science.

How far water ice extends toward the equator depends largely on how much water has been available in the Martian atmosphere in the recent past, Byrne said: "The ice is a relic of a more humid climate not very long ago, perhaps just several thousand years ago."

But to find highly pure ice far closer to the equator because of random meteor impacts was unexpected, he said.

There are several theories about how a layer of such pure ice could have formed beneath Mars surface. Byrne said he thinks that one of the most promising ideas is that this ice on Mars formed in the same way that pure ice lenses form beneath the surface of the Earth.

"That's where you have very thin films of liquid water around ice grains and soil grains and they migrate around to form clear ice lenses on top of the ice table, even at temperatures well below zero.  This process is called ‘frost heave' on Earth, and it's considered a nuisance in most places because it cracks up roads and tilts walls and destroys foundations of houses.

In the past decade, researchers from UA's Lunar and Planetary Laboratory have played major roles in piecing together the picture of where water is to be found on Mars: