Worker bumblebees, tagged with tiny RFID chips, are seen here caring for the larvae, which develop inside egg-shaped structures; pollen and nectar are kept within the pot-shaped structures. (Photo: Avery Russell)

Scientists Use Big-Brother Technology to Spy on Bumblebees

RFID chips similar to the ones used to protect stores from shoplifting have granted an interdisciplinary team of UA researchers unprecedented glimpses into a colony of bumblebees.
Daniel Stolte
,
University Communications
Feb. 17, 2017
Resources for the Media
Extra Info:

Watch a video of Avery Russell and his bumblebee colony in the lab here. 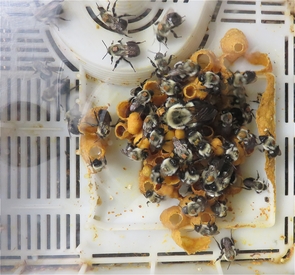 By tagging individual bumblebees with microchips, biologists have gained insights into the daily life of a colony of bumblebees (Bombus impatiens) in unprecedented detail. The team found that while most bees are generalists collecting both pollen and nectar over the course of their lifetime, individual workers tend to specialize on one of the two during any given day, dedicating more than 90 percent of their foraging sorties to either pollen or nectar. The observations also revealed that individual bumblebee workers differ vastly in terms of their foraging activity.

Just like their domesticated cousins, the honey bees, bumblebees play important roles as pollinators, thus helping in agriculture and fruit production. But despite the ecological services they provide, many aspects of their biology still remain a mystery. By outfitting each bumblebee with a radio frequency identification, or RFID, tag — similar to the ones used to protect merchandise from shoplifters — the researchers were able to keep tabs on them at all times and log the data automatically instead of relying on human observations limited to certain times.

"The way these studies have typically been done requires a human observer sitting in front of a hive entrance and taking notes all day, and nobody wants to do that," says Avery Russell, the lead author of the study. Russell is a doctoral student in entomology and insect in the lab of Daniel Papaj, a professor in the University of Arizona's Department of Ecology and Evolutionary Biology. "With the RFID chips, we can track every nectar and pollen collection trip made over each worker's lifespan and a portion of the colony's lifespan."

The researchers then used this data to determine how patterns of specialization on each food type differed at timescales of a day or over a lifetime. The results are published in the journal Scientific Reports.

Once a bumblebee queen has mated, she burrows into the ground and overwinters. The following spring, she emerges and starts a hive that lasts until the fall. A typical bumblebee colony grows to about 75 workers, with about 40 to 50 going out and foraging on flowers for nectar and pollen. After the colony's growth phase, the colony produces unfertilized eggs that hatch into males. The male bumblebees then disperse in search for other unmated queens to begin the cycle anew.

"Each individual bee only lives between two weeks to a month at the most," Russell says, "and even though they behave as generalists over their lifetime, our study showed that they tend to specialize on one food source over the course of a foraging day."

The researchers were surprised to find a vast difference in efficiency, with the most active foragers making 40 times the number of trips each day as the least active workers.

"Interestingly, when we studied the morphology between very active foragers and workers that barely leave the hive, we found that bees with more sensitive antennae foraged more," Russell said.

Similar variation has been in observed in honey bees and other eusocial species, where some workers are much more active than others, but no one had seen it to this extreme due to the limits of human observations.

"If you watch a bee only for an hour or so, you can't say what it will do over the course of a few days or over its whole life," Russell says. "We don't yet know why, but it could be that workers that forage less do so because they aren't quite as skilled at foraging as others and make themselves useful by doing more around the hive."

To track the bees' behavior, the team superglues tiny RFID tags to the backs of the bees. Each tag weighs only 2 to 3 percent of the bee's weight. A Y-tube connects the hive to two arenas, one that offers pollen and one that offers nectar. When a bee leaves the hive to forage, it can choose to go to the pollen chamber or the nectar chamber. Two RFID readers mounted at the entrance keep track of the bees going in and out and help the researchers collect a wealth of data.

"This setup gives us information about directionality," Russell explains. "Is the forager leaving or returning from foraging? We also get an idea of whether a bee goes from one chamber to the other, or whether it makes repeated trips to only one chamber, and we get to know how long the trips were."

Since the team was especially interested in the sequence of the foraging trips over the course of the day, some heavy lifting was needed to make sense of all the data. To do this, Russell enlisted the help of Sarah Morrison, a doctoral student in the UA's Lunar and Planetary Laboratory, who studies orbital dynamics and the evolution of solar systems.

"Each RFID reader only spits out timestamps and the identity of the bee, so if you want to know what the bees are doing, you need to parse all that information and turn it into things we can understand," Russell says. "For example, how many trips a forager makes per day."

While honey bees are known to be very consistent and tend to stick to one species of plant and often one type of reward over a day, a phenomenon known as floral consistency, bumblebees were thought to be more generalist. The present study came somewhat as a surprise in that Russell's team found the bees tend to make strings of foraging runs for the same reward on a given day.

"One possible explanation is that foraging for pollen versus nectar requires very different behavioral regimes, so it makes sense for them to focus on one at a time," he says. "Also, in many cases pollen and nectar are not both available from the same plant species."

Researchers still don't know why bees switch between foraging for nectar or pollen.

"It is possible they take cues from the brood," Russell says, "in that they produce pheromones that say 'we need more of this or more of that.'"

"One of the reasons bees might specialize could be some sort of memory constraint," Russell says. "Rather than having to switch back and forth between dealing with many different floral designs and constructions, it might be more efficient to just stick with one for the duration of a foraging day."

As for the more domestic individuals that were found to forage far less than their more adventurous colleagues, Russell says that this might reflect economics of skill allocation.

"Those that are less good at foraging probably shouldn't go foraging in the first place," he explains, "as that requires a lot of learning how to recognize a flower and how to collect the nectar. Foragers hone their skills over dozens, if not hundreds, of visits until they figure out how to efficiently pry open the lips of a snapdragon flower, for example. Plus, they have to use visual and olfactory cues to learn which are the rewarding and the non-rewarding flowers."