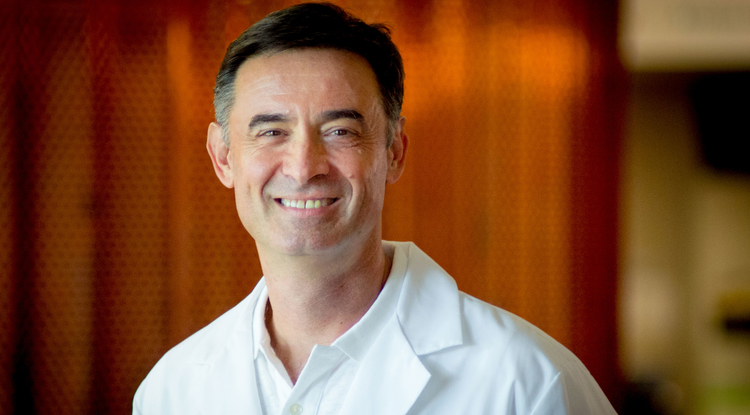 Dr. Janko Nikolich-Zugich will use a $4.5 million grant from the National Institute on Aging to study how common infectious, psychological and physical stressors affect immunity, lifespan and the aging process.

A prestigious $4.5 million MERIT Award from the National Institutes of Health will allow a University of Arizona immunologist to pursue a new, more promising way to study human aging.
Nadia Whitehead
,
College of Medicine – Tucson
Dec. 12, 2019
Resources for the Media

The human body gets stressed every single day. Whether we contract a minor infection or even argue with a loved one, these small stressors impact our immune system.

Over time, these repeated stressors can impact how we age, says Dr. Janko Nikolich-Zugich, an internationally noted immunologist and co-director of the University of Arizona Center on Aging at the College of Medicine – Tucson.

The grant is a Method to Extend Research in Time, or MERIT, Award, a prestigious honor that allows select, outstanding and experienced researchers to spend less time on grant applications and more time on their research. With the award, Nikolich-Zugich’s grant will double from five years of funding to 10.

The study will involve mice, which have played a key role in medical research for many decades. But the mice studied in research laboratories across the world could more closely mirror human beings, Nikolich-Zugich argues.

“The mice we study in our labs are ultra clean,” says Nikolich-Zugich, who also is the Bowman Professor and head of the Department of Immunobiology. “Their housing is super clean and controlled, they don’t have infections and they really don’t have any stress in life — like running away from cats or snakes.

“Our mouse subjects need to more closely mimic regular humans; humans get dirty, they get sick.”

To replicate a more natural aging process, Nikolich-Zugich will purchase domestic mice, which will be co-housed with lab mice for a time and then removed from the study. The lab mice, which then will carry more natural microbes because of intermingling, will be the focus of the project.

His immunology team then will apply subtle stressors to their lives, hoping to learn how they impact the mice’s immune systems over time.

Nikolich-Zugich also will study mice that carry the cytomegalovirus, or CMV. The virus affects more than half of all individuals and is contracted, for the most part, at a young age.

CMV remains dormant for most of life and does not cause outward symptoms—unless our immune system fails. Daily stressors and the aging process can reactivate the virus, which can attack major organs. By studying non-laboratory mice with, and without, CMV, the team hopes to understand exactly how the virus affects health late in life. No cure for CMV exists, but Nikolich-Zugich believes his study can offer new insight to guard against reactivation of the virus.

“Only a small percentage of researchers nationwide receive MERIT Awards. This is a true testament to how University of Arizona faculty members are at the forefront of research to understand our biggest challenges in human health and health care," said University of Arizona President Robert C. Robbins. "Learning more about the aging process is an important strategic focus for the university’s future. I am proud of the work Dr. Nikolich-Zugich and his team are pursuing, and I believe they will help us learn a great deal more about how we can live longer, healthier lives.”

A version of this story originally appeared on the University of Arizona Health Sciences website: https://opa.uahs.arizona.edu/newsroom/news/2019/uarizona-health-sciences-researcher-seeks-new-way-understand-human-aging