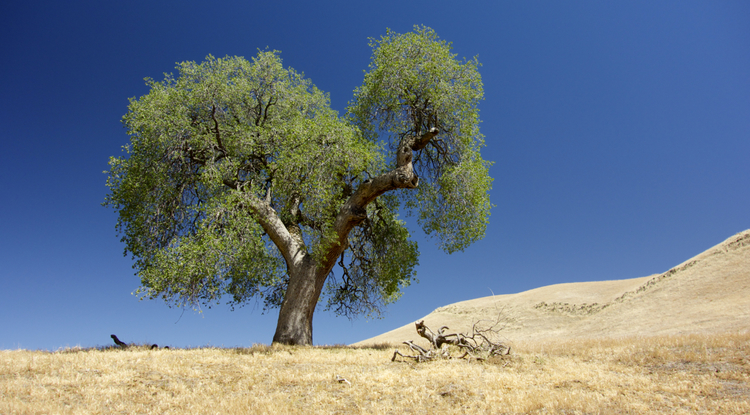 The width of the annual tree rings of blue oaks (Quercus douglasii) in central California reflects how much winter rain falls each year. The same winter storms that water those oaks bring snow to California’s Sierra Nevada. (Photo: Kevin Anchukaitis)

New research from the UA’s Laboratory of Tree-Ring Research shows that snowpack in California’s Sierra Nevada was at historically low levels this year, which has implications for water use and wildfires.
Mari N. Jensen
,
UA College of Science
Sept. 14, 2015
Resources for the Media
Extra Info: 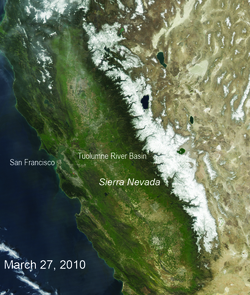 A satellite image of the snow cover in the Sierra Nevada in California and Nevada from 2010 (Image: NOAA/MODIS) 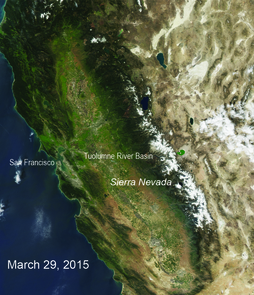 Snowpack in California’s Sierra Nevada in 2015 was at the lowest level in the past 500 years, according to a new report led by University of Arizona researchers.

The team’s research is the first to show how the 2015 snowpack compares with snowpack levels for the previous five centuries.

"Our study really points to the extreme character of the 2014-15 winter. This is not just unprecedented over 80 years — it’s unprecedented over 500 years," said Valerie Trouet, an associate professor of dendrochronology at the UA Laboratory of Tree-Ring Research.

"We should be prepared for this type of snow drought to occur much more frequently because of rising temperatures," Trouet said. "Anthropogenic warming is making the drought more severe."

California’s current record-setting drought began in 2012, the researchers note in their report.

On April 1 of this year, California Gov. Jerry Brown declared the first-ever mandatory water restrictions throughout the state while standing on dry ground at 6,800-foot elevation in the Sierra Nevada. The historical average snowpack on that site is more than five feet, according to the California Department of Water Resources.

The lack of snow in 2015 stems from extremely low winter precipitation combined with record high temperatures in California in January, February and March, Trouet said. About 80 percent of California’s precipitation occurs in the winter months, she said. Snowpack level is generally measured on April 1 each year, a time when the snowpack is at its peak.

"Snow is a natural storage system," Trouet said. "In a summer-dry climate such as California, it’s important that you can store water and access it in the summer when there’s no precipitation."

In past years, the snows of the Sierra Nevada slowly melted during the warmer months of the year, and the meltwater replenished streams, lakes, groundwater and reservoirs. In a winter with less snow or with winter precipitation coming as rain rather than snow, there is less water to use during California’s dry summers.

First author Soumaya Belmecheri said of the extremely low snowpack in 2015, "This has implications not only for urban water use, but also for wildfires."

Belmecheri is a postdoctoral research associate at the Laboratory of Tree-Ring Research.

To determine snowpack levels for the past 500 years, Trouet and her colleagues used previously published tree-ring data that reflects annual winter precipitation in central California from 1405 to 2005 and annual snowpack measurements since the 1930s. The team also used a previously published reconstruction of winter temperatures in southern and central California that spanned the years 1500 to 1980.

Co-authors are Flurin Babst of the Laboratory of Tree-Ring Research, Eugene R. Wahl of the NOAA/National Centers for Environmental Information in Boulder, Colorado, and David W. Stahle of the University of Arkansas in Fayetteville.

Trouet said, "There have been reconstructions of the drought conditions in California, but no one’s looked at the snowpack in particular."

After the extremely low snowpack levels in the Sierra Nevada were revealed in April, co-author Wahl wondered if it was possible to reconstruct the paleohistory of snowpack for those mountains.

Trouet thought the necessary data were available — so the team set to work.

Other researchers already had measured the width of tree rings for 1,505 blue oaks in California’s Central Valley from 33 different sites. Belmecheri and her colleagues put those measurements together as one long chronology, meaning the scientists had a blue oak tree-ring record that reached back reliably to the year 1405.

For those particular oaks (Quercus douglasii), the width of their annual rings reflects the winter precipitation they receive. Because the same storms that water the oaks also dump snow in the Sierra Nevada just to the east, the width of the blue oaks’ rings is a good proxy for snowpack in the Sierras, Trouet said.

Wahl already had published a reconstruction of central and southern California February-March temperatures from 1500 to 1980 that is independent of the blue oak tree-ring records.

Snowpack in the Sierras has been measured approximately since the 1930s, so the researchers checked their snowpack estimates from tree rings and the temperature reconstruction against actual snowpack measurements for 1930 to 1980.

The different measurements all lined up. When winter precipitation was lower and temperature was higher, snowpack was lower.

Peak snowpack is the measurement that hydrologists use to predict the amount of runoff that will occur in the summer, Trouet said.

The team’s next step, she said, is investigating and reconstructing the atmospheric circulation patterns that contribute to the California drought and the Sierra Nevada snowpack.