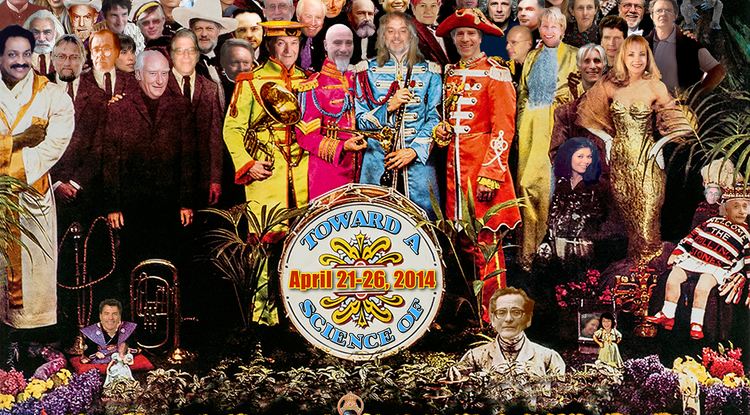 Click on image to enlarge. The 20th anniversary Toward a Science of Consciousness 2014 conference logo is a rendition of The Beatles' "Sgt. Pepper's Lonely Heart Club Band" album cover by Dave Cantrell, UA BioCommunications. 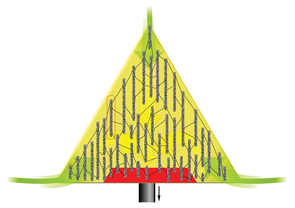 An illustration of a cortical pyramidal neuron, likely the brain site for consciousness, by Dave Cantrell, UA BioCommunications.

Spiritual medicine guru Deepak Chopra and world-renowned physicist and mathematician Sir Roger Penrose will visit the University of Arizona to celebrate the 20th anniversary of "Toward a Science of Consciousness," the world's largest, longest-running interdisciplinary conference on conscious experience, the nature of existence and our place in the universe.

An estimated 800 scientists, philosophers, experientialists, artists and students from more than 60 countries are expected to take part in the weeklong gathering at the University Park Marriott Hotel, near the UA Main Gate.

The conference – taking place April 21-26 – will reflect on 20 years of progress, dilemmas, current understanding and future directions, attracting a "who's who" of plenary speakers including keynote speaker Penrose, Chopra and 24 others, including:

A full list of speakers can be found here.

The conference will include 18 pre-conference workshops, 24 concurrent sessions, 2 poster sessions and 2 side trips to explore Tucson. Seating is limited and registration is required.

Toward a Science of Consciousness began in Tucson in 1994 and was held at the University of Arizona Medical Center's Duval Auditorium, organized by the UA's Stuart Hameroff, now Professor Emeritus of Anesthesiology and Psychology and Director of the Center for Consciousness Studies, along with UA professors Alfred Kaszniak in the Department of Psychology and the late Alwyn Scott in the Department of Mathematics, and then-conference manager Jim Laukes.

It returns to Tucson every other year, and convenes in locations around the world in the alternating years. The 2015 conference will be held in Helsinki, organized by philosopher Paavo Pylkkanen.

The 1994 conference was considered by many to be a landmark event. "During much of the 20th century, behaviorism dominated brain science and consciousness was a dirty word," Hameroff recalled.

"In the late 1980s, scientists like Sir Roger Penrose and Francis Crick wrote books about consciousness, and the topic became scientifically acceptable," he said. "But prior to 1994 there were only focused conferences – for example on philosophy of mind, Hindu spiritual approaches, neuroscience or artificial intelligence. Our idea was to bring these under one umbrella, and it worked. The Internet had just appeared and people came from everywhere, from all sorts of disciplines."

A highlight of the 1994 conference was a talk by then-unknown philosopher David Chalmers. "The first morning was philosophy; the first two talks were really boring and the audience grew restless. Then Chalmers took the stage with shoulder-length hair, strutting like Mick Jagger," Hameroff recalled.

"Chalmers talked about how problems like memory, learning, attention and behavior were relatively easy compared to the really 'hard problem' of how and why we have conscious experience," Hameroff said. "We could have been nonconscious, robot-like 'zombies' with no inner life. How and why do we have feelings and awareness? That was the 'hard problem.'"

"At that moment," Hameroff said, "we knew why we were there."

The 1994 conference spurred broad interest. "We hadn't considered a follow-up conference," recalls Hameroff, "but there was great demand."

The UA's Center for Consciousness Studies was begun in 1998 with a grant from the Fetzer Institute, and Chalmers returned to join the UA Department of Philosophy and serve as the center's director. He became the UA's youngest-ever Regents' Professor before departing for his native Australia five years later.

Hameroff became the center's director, and the center moved to the Department of Anesthesiology in the College of Medicine. In addition to his clinical duties, Hameroff continues the collaboration he began with Penrose at the 1994 conference. The two are well-known for their controversial quantum theory of consciousness.

Penrose is this year's keynote speaker. He'll also give a public talk on astrophysics on April 21 at Steward Observatory, speaking about evidence for his theory that the Big Bang was preceded by another aeon, and another before that, suggesting we live in a serial, rather than parallel, universe.

Chalmers and Hameroff co-chair the upcoming conference, managed by center Assistant Director Abi Behar-Montefiore. "This year's conference is something of an all-star show," she said. "We invited the top people from the past and those doing the best current work. Nearly everyone said yes."

"It's a fun-loving bunch," Hameroff said of the group that convenes at the Tucson conference, which has its own social traditions, such as a poetry slam and a closing End-of-Consciousness party. "We're the mouse that roars every two years, and people keep coming back," he continued. "Many know the UA not through astronomy, medicine or even our great basketball team. In consciousness studies, we're No. 1."