With its suite of science instruments, Juno will investigate the existence of a solid planetary core, map Jupiter's intense magnetic field, measure the amount of water and ammonia in the deep atmosphere, and observe the planet's auroras. Juno's principal goal is to understand the origin and evolution of Jupiter. (Artist's concept: NASA/JPL)

Skimming the Clouds of Jupiter

For decades, William Hubbard, a UA planetary sciences professor, has worked on getting a spacecraft to Jupiter, closer than any have gone before.
Daniel Stolte
,
University Relations – Communications
July 5, 2016
Resources for the Media
Extra Info:

Juno and the European Space Agency's Rosetta are the only spacecraft operating on solar power beyond the asteroid belt. At Jupiter, sunlight levels are 25 times lower than at Earth, making Jupiter the farthest planet to which we can send solar-powered probes with current photovoltaic technology. Learn more about how Juno went where no solar-powered spacecraft had gone before with this infographic. 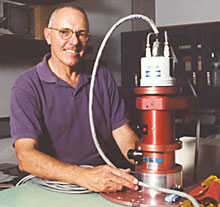 After cruising through space for five years, NASA's Juno spacecraft, the fastest man-made object, fired its main thrust engine to brake its fall toward Jupiter, the largest planet in our solar system. Its mission: to gather clues shrouded under Jupiter's thick layers of clouds that reveal what the planet is made of on the inside, and to help answer some of the most fundamental questions about how planets form from swirling clouds of gas and dust.

During its critical braking maneuver, carefully calculated to place the Juno probe in a stable orbit around the giant gas planet, UA planetary sciences professor William Hubbard joined a group of about 30 scientists involved with the mission at the Jet Propulsion Laboratory in Pasadena, California, anxiously awaiting confirmation from the windmill-shaped spacecraft that all went well.

"It's a very crucial maneuver," Hubbard said while preparing for the probe's arrival at Jupiter. "The white-knuckle period will be when the spacecraft comes in over the north pole of Jupiter, and then the main engine will fire for about half an hour. If that were to be unsuccessful, the probe would shoot past Jupiter and go off into interplanetary space."

Hubbard has been waiting for that moment for his whole career.

"Having a geophysical orbiter at Jupiter has been a top priority for a number of people in the scientific community for many years," he says. "Our objective is to get at a close range of a giant planet. And when you get that close to Jupiter, you begin to see details of its magnetic field and its gravity field that you can't see at long range. Some of those details will tell us about the interior of Jupiter."

Despite having pointed telescopes at Jupiter for more than 400 years, mankind has much more to learn about the planet that would eclipse 11 Earths lined up in a row. One question, in particular, that has vexed scientists is whether Jupiter hides a solid core of elements heavier than those making up its bulk — hydrogen and helium — or whether those two gases simply become more and more compressed all the way to the center.

"Whether there is evidence for a large, massive core inside Jupiter, as is predicted by various theories about the origins of Jovian planets, is one of the things we hope to learn fairly quickly," Hubbard says.

With more and more exoplanets being discovered far, far away from the reach of space probes, scientists look to our very own gas giant to help them understand how such planets form, how they evolve over time and what they look like inside. Current belief holds that they will not form directly from clouds of hydrogen-rich material that collapses to give birth to stars including our sun, but instead they need a trigger of some form of massive, denser material, Hubbard explains.

As co-investigator on the mission, Hubbard is part of a team that oversees the gravity experiment on the spacecraft, which is expected to reveal clues about Jupiter's hidden interior. Since Jupiter is not a solid, perfectly spherical and homogeneous ball, but rather like a spinning bag filled with a swirling mix of gases, fluids and possibly solid matter, its gravitational field reflects those chaotic conditions in the planet's interior. Its tug on the Juno spacecraft intensifies or lessens by tiny, but measurable, amounts as it travels around the planet.

A highly synchronized, locked loop of radio wave communication between Juno and the antenna array at NASA's Goldstone Deep Space Communications Complex in California’s Mojave Desert will detect Juno moving toward or away from Earth under Jupiter's gravitational pull — shifts on the magnitude of microns.

"Think of how much your weight changes when a mosquito lands on your head," Hubbard says. "Juno's gravity experiment will potentially be capable of measuring signals at the level of one-hundredth of that amount."

After removing the effects of many influences interfering with the gravity measurements — a "terrible job," according to Hubbard — a three-dimensional dataset will emerge, representing Jupiter's gravitational field. Because its shape depends on the planet's interior structure as well as the tugging from its nearest large moons, the gravitational field will allow Hubbard and his collaborators to make inferences about Jupiter's interior.

"We will see terms in Jupiter's gravity field that we can't see from Earth, and some of these terms are related to the interior structure of Jupiter," Hubbard explains. "Others are related to its interior dynamics — for example, how much material is moved around in Jupiter's interior through convection, as opposed to if it were a quiescent planet."

'Money Part of the Orbit'

Unlike any other spacecraft that visited Jupiter before, Juno will enter an orbital trajectory taking it over Jupiter's north and south poles once every 14 days. During what Hubbard calls the "money part of the orbit," the probe will approach Jupiter as close as 5,000 kilometers (about 3,000 miles) above its clouds.

"Most of the time, though, it will be very far away from Jupiter," Hubbard says, "partly to protect it from Jupiter's intense radiation, and partly because you can't carry enough fuel to maintain a real tight orbit around a planet with such a strong gravitational field."

Jupiter's huge magnetic field, which, if it were visible, would appear as big as the full moon when seen from Earth, captures the solar wind and accelerates it into a deathly rain of radiation. Juno's instruments are encased in a titanium vault and its orbit is designed to avoid the peaks of Jupiter's radiation belts as much as possible.

As the first spacecraft to be diving underneath Jupiter's radiation belts, Juno will be able to make observations using microwaves that will provide glimpses into Jupiter's atmosphere to much deeper levels than was possible before.

Potentially, scientists will be able to see several hundred kilometers below the clouds, much deeper than NASA's Galileo entry probe that descended into Jupiter's atmosphere in 1995.

Juno's measurements are expected to also reveal clues about how much water there is in Jupiter's atmosphere, which helps determine which planet formation theory is correct or if new theories are needed. In addition, the data will offer conclusions about whether Jupiter formed at its current location in the solar system or migrated to its present orbit over time.

Because Juno won't be able to stay out of harm's way forever, its instruments and electronic components are expected to deteriorate over the course of the mission — 20 months for a total of 37 orbits. Before the spacecraft becomes uncontrollable, NASA's engineers will set a final course plunging the spacecraft into Jupiter, where it will burn up without leaving a trace, to avoid the risk of it contaminating one of Jupiter's potentially life-friendly moons such as Europa.

Hubbard can't wait for the probe to begin streaming data to Earth that he has awaited for years.

"When you work in outer solar system exploration as opposed to inner solar system exploration, you learn a special kind of patience," he says. "The distances are much greater; the orbital periods are much greater; it takes longer to get there; so when you're involved in these projects, you sort of grow old together, you see everybody turn into old men and old women over the course of the whole endeavor."