Space Sunshade Might Be Feasible in Global Warming Emergency 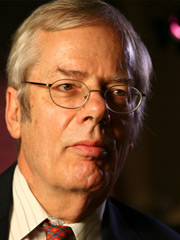 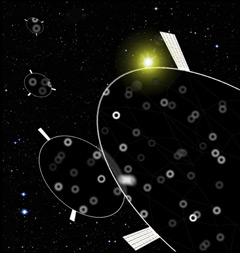 The graphic shows the 2 foot-diameter flyers at L1. They are transparent, but blur out transmitted light into a donut, as shown for the background stars. The transmitted sunlight is also spread out, so it misses the Earth. This way of removing the light avoids radiation pressure, which would otherwise degrade the L1 orbit.(Illustration: Courtesy of Roger Angel, UA Steward Observatory)

The possibility that global warming will trigger abrupt climate change is something people might not want to think about.

But University of Arizona astronomer Roger Angel thinks about it.

Angel, a University of Arizona Regents' Professor and one of the world's foremost minds in modern optics, directs the Steward Observatory Mirror Laboratory and the Center for Astronomical Adaptive Optics. He has won top honors for his many extraordinary conceptual ideas that have become practical engineering solutions for astronomy.

For the past year, Angel has been looking at ways to cool the Earth in an emergency. He's been studying the practicality of deploying a space sunshade in a global warming crisis, a crisis where it becomes clear that Earth is unmistakably headed for disastrous climate change within a decade or two.

Angel presented the idea at the National Academy of Sciences in April and wona NASA Institute for Advanced Concepts grant for further research in July. His collaborators on the grant are David Miller of the Massachusetts Institute of Technology, Nick Woolf of UA's Steward Observatory, and NASA Ames Research Center Director S. Pete Worden.

Angel is now publishing a first detailed, scholarly paper, "Feasibility of cooling the Earth with a cloud of small spacecraft near L1," in the Proceedings of the National Academy of Sciences. The plan would be to launch a constellation of trillions of small free-flying spacecraft a million miles above Earth into an orbit aligned with the sun, called the L-1 orbit.

The spacecraft would form a long, cylindrical cloud with a diameter about half that of Earth, and about 10 times longer. About 10 percent of the sunlight passing through the 60,000-mile length of the cloud, pointing lengthwise between the Earth and the sun, would be diverted away from our planet. The effect would be to uniformly reduce sunlight by about 2 percent over the entire planet, enough to balance the heating of a doubling of atmospheric carbon dioxide in Earth's atmosphere.

Researchers have proposed various alternatives for cooling the planet, including aerosol scatterers in the Earth's atmosphere. The idea for a space shade at L1 to deflect sunlight from Earth was first proposed by James Early of the Lawrence Livermore National Laboratory in 1989.

"The earlier ideas were for bigger, heavier structures that would have needed manufacture and launch from the moon, which is pretty futuristic," Angel said. "I wanted to make the sunshade from small 'flyers,' small, light and extremely thin spacecraft that could be completely assembled and launched from Earth, in stacks of a million at a time. When they reached L1, they would be dealt off the stack into a cloud. There's nothing to assemble in space."

The lightweight flyers designed by Angel would be made of a transparent film pierced with small holes. Each flyer would be two feet in diameter, 1/5000 of an inch thick and weigh about a gram, the same as a large butterfly. It would use "MEMS" technology mirrors as tiny sails that tilt to hold the flyers position in the orbiting constellation. The flyer's transparency and steering mechanism prevent it from being blown away by radiation pressure. Radiation pressure is the pressure from the sun's light itself.

The total mass of all the fliers making up the space sunshade structure would be 20 million tons. At $10,000 a pound, conventional chemical rocket launch is prohibitively expensive. Angel proposes using a cheaper way developed by Sandia National Laboratories for electromagnetic space launchers, which could bring cost down to as little as $20 a pound.

The sunshade could be deployed by a total 20 electromagnetic launchers launching a stack of flyers every 5 minutes for 10 years. The electromagnetic launchers would ideally run on hydroelectric power, but even in the worst-case environmental scenario with coal-generated electricity, each ton of carbon used to make electricity would mitigate the effect of 1000 tons of atmospheric carbon.

Once propelled beyond Earth's atmosphere and gravity with an electromagnetic launcher, the flyer stacks would be steered to L-1 orbit by solar-powered ion propulsion, a new method proven in space by the European Space Agency's SMART-1 moon orbiter and NASA's Deep Space 1 probe.

"The concept builds on existing technologies," Angel said. "It seems feasible that it could be developed and deployed in about 25 years at a cost of a few trillion dollars. With care, the solar shade should last about 50 years. So the average cost is about $100 billion a year, or about two-tenths of one percent of the global domestic product."

He added, "The sunshade is no substitute developing renewable energy, the only permanent solution. A similar massive level of technological innovation and financial investment could ensure that.

"But if the planet gets into an abrupt climate crisis that can only be fixed by cooling, it would be good to be ready with some shading solutions that have been worked out."

DOWNLOADABLE SOLARSHIELD GRAPHIC: http://images.uanews.org/images/request/solarshield.jpg
PHOTO CAPTION: The graphic shows the 2 foot-diameter flyers at L1. They are transparent, but blur out transmitted light into a donut, as shown for the background stars. The transmitted sunlight is also spread out, so it misses the Earth. This way of removing the light avoids radiation pressure, which would otherwise degrade the L1 orbit. (Illustration: Courtesy of UA Steward Observatory)