For more information on the dinner and/or to submit testimonials about Professor Titley, contact Professor George Davis at gdavis@u.arizona.edu 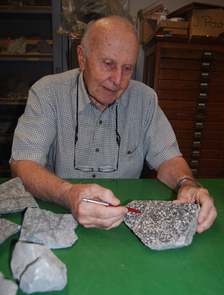 (Click to enlarge) Spencer Titley points out the copper veinlet in a piece of porphyry copper from Arizona's San Manuel Mine. (Credit: Mari N. Jensen, UA College of Science) 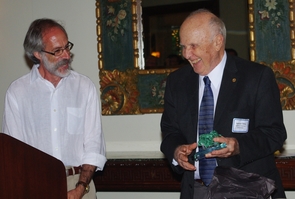 (Click to enlarge) Spencer Titley (right) receives an award for his 50-plus years of teaching and research at the University of Arizona from Joaquin Ruiz, dean of the UA College of Science. (Credit: Lori Stiles)

UA's department of geosciences is holding a dinner in Titley's honor on Tuesday Nov. 17. In September 2009, the UA College of Science honored him for his years of teaching and research at the college's fall gathering of faculty.

Although Titley supposedly retired at the end of the 2008-09 academic year, it's hard to tell. This fall he is teaching an honors course on mineral resources and society and will be teaching the basic course in ore deposits in the spring.

Karl Flessa, head of UA's department of geosciences, said, "Spence Titley is as solid a foundation as you can get in the geosciences. He's the foundation of the department and shaped its development to its top-10 status today – and his legions of former students have gone on to shape the whole discipline.

"Field geology, planetary geology, economic geology, geochemistry – Spence has done it all. And he's always had a keen eye for how geological insight could benefit society."

Joaquin Ruiz, dean of UA's College of Science and a UA professor of geosciences, said, "Spence Titley is truly one of the most extraordinary economic geologists in the world." Ruiz added, "He also has a legacy of educating students so that they themselves have become leaders in their fields."

Titley started his teaching career at the UA as a University instructor in 1956. He earned his doctorate in geology from the UA in 1958, joined UA's faculty as an assistant professor in 1960 and rose through the ranks to professor.

He is also renowned for the numbers of graduate students he has guided, having so far been the major advisor for 131 master's and doctoral students.

Carlotta Chernoff, a former student now working at ConocoPhillips, wrote in a recent UA department of geosciences newsletter, "It is clear that Spence considers the most important pursuit of his career to be that of teaching students – whether geosciences or non-major students, or even Apollo astronauts."

In 1964, Titley was one of the UA scientists who trained Apollo-astronauts-to-be about the geology of the moon and gave them field experience with moon-like geological features at Meteor Crater in northern Arizona and in other locations.

He has also worked with K-12 students as a member of the Southern Arizona Science Education Coalition.

He was elected to the National Academy of Engineering in 2005 for his research on the origin of the copper in the Southwest copper province. His search for answers has led him to investigate all scales of copper deposits, from entire deposits down to the level of atoms. He has taught courses for geologists throughout the world.

Titley's findings have enlightened and aided both industrial and academic geologists. He said, "My work has always had a focus on how to adapt scientific discoveries to practical purposes, to the search for ore," Titley said, adding that he wants to put "the science we learn to practical purpose for society and the real world."

Flessa said, "Spence's connections with industry have really worked to the benefit of UA students. He exemplifies the idea of how a strong scientific program can benefit the economy of the state."

Porphyry copper deposits, Titley's area of expertise, have been the most economically important type of copper deposit for the last 100 years. In the United States, two-thirds of the nation's copper comes from porphyry copper deposits within 300 miles of Tucson, Ariz. The deposits are part of a chunk of the Earth's crust geologists call the "Southwest copper province" that underlies parts of Arizona, New Mexico and Mexico.

Titley saw porphyry copper for the first time while still a teenager. While moving cattle in the high country of his uncle's ranch near Eagle, Colo., he stopped by a prospector's camp.

The mining bug didn't bite Titley right then, but the meeting foreshadowed his career as a mining geologist. He wishes he still had that rock.

Titley said, "I'm a mining geologist. It's a very eclectic profession." He added, "I have had to be very broadly educated in geology and related sciences to successfully accomplish my mission as a geological engineer."

His work took him to more than 30 countries. When asked about the most fun he's had as an exploration geologist, Titley recalled a long-ago trip to New Guinea. "It was very exciting to me that when I walked up a creek or down a river or up a mountainside, it was likely I was the first geologist to ever to put his rock hammer on it."

Of his career, Titley said, "This has never been a job to me. It's a way of life."

He has a Bronze Star for his service in the Korean War.

He worked for industry after receiving his geological engineer degree at the Colorado School of Mines in 1951 and again after his time in the service. He also worked for industry for two years after he earned his doctorate and before returning to the UA in 1960 to become a faculty member.