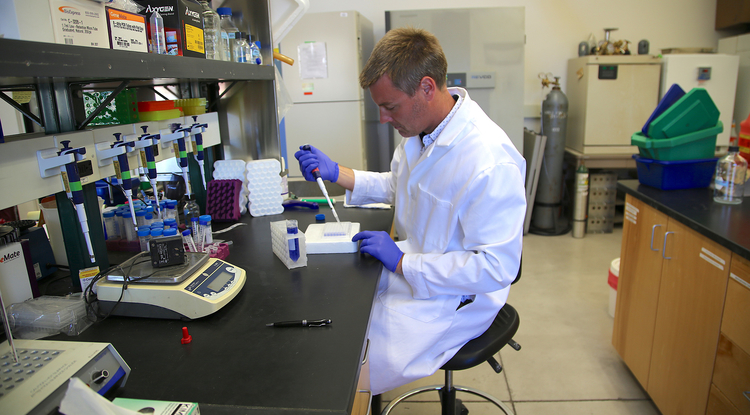 GenetiRate is taking an easy-to-use test developed at the UA and making it available to the fish farming industry, allowing for selection for one of the primary traits that influences profitability.
Paul Tumarkin
,
Tech Launch Arizona
Sept. 27, 2018
Resources for the Media 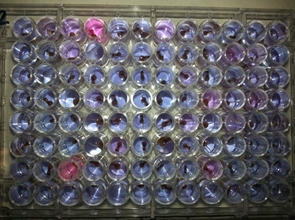 Sixteen hours after the assay is applied, the water color of each well indicates the metabolic rate of the organism in that well, offering a simple visual indicator identifying the individuals that have the highest metabolic rates and will grow most quickly. (Photo: Benjamin Renquist)

A University of Arizona researcher has invented a new assay that measures the metabolic rate of aquatic animals, from fish to mollusks to crustaceans, to identify those individuals that will grow more quickly.

Benjamin Renquist, assistant professor of animal and comparative biomedical sciences at the UA College of Agriculture and Life Sciences, developed the assay, which will be used to select brood stock animals – those best for breeding – with a greater genetic potential for growth.

Tech Launch Arizona (TLA), the office of the UA that commercializes inventions stemming from research, working with inventing team, protected the invention by filing for a patent application and has now licensed it to startup GenetiRate.

The invention is elegantly simple:  Individual organisms are placed into “wells,” or small tubes of a microplate. An assay buffer containing rezasurin, a colorimetric/fluorescent indicator, is added to each well. The indicator enters the animal and is converted from a non-fluorescent blue to a fluorescent pink in proportion to the individual’s metabolic rate.

Individuals that induce a greater change toward pink have a higher metabolic rate than individuals that have a low metabolic rate. Accordingly, the change in color allows for selection of those organisms that have high metabolism and growth rates. Importantly, resazurin is non-toxic, has no lasting effects on the organism, and is no longer visibly present in the organism 30 minutes after exchanging assay buffer with fresh water.

“However, in most cases we can start to see signal at three hours,” he says.

The assay can be also applied to tissue samples drawn from skeletal muscle needle biopsies to identify individuals that are more feed efficient.

The economics of the aquaculture industry are highly dependent on animal growth rate and the efficiency with which they convert feed into protein. Current brood stock selection relies on identifying those animals that grow most quickly; however, in group-housed aquatic species, this results in the selection of fish that consume the most feed, not necessarily fish that are genetically superior for growth.

The new assay solves this problem for aquaculture producers by allowing for selection for one of the primary traits that influences profitability. The fast, easy-to-interpret indicators also allow for selection of brood stock at the embryo stage rather than at adulthood.

“Alternative selection methods typically focus on only one characteristic to the detriment of other important factors,” Burgess says. “The GenetiRate approach optimizes both growth and feed efficiency in their selection process.”

The team’s participation in TLA’s NSF I-Corps program helped them better understand their target market and potential customer base. In addition, this experience allowed the startup team to develop a business model that would transform the invention into a saleable product. Coming out of those processes and with help from TLA, the company has already gained its first customer: Hawaiian Shellfish, a subsidiary of GoosePointe Oysters.

A version of this article originally appeared on the Tech Launch Arizona website: https://techlaunch.arizona.edu/news/startup-licenses-ua-invented-aquatic-animal-growth-assay