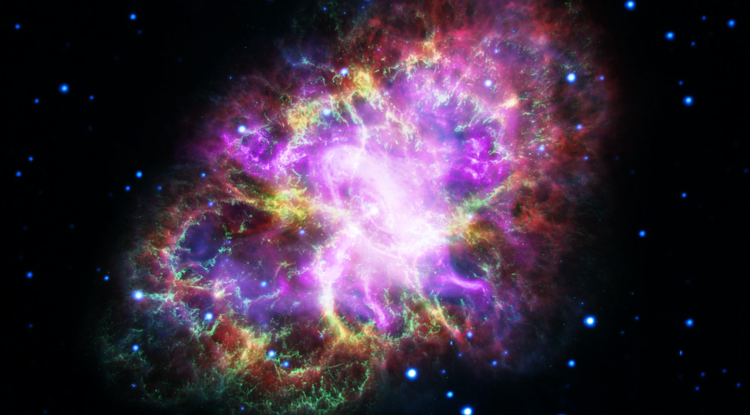 New research revealed that the entire zoo of electromagnetic radiation streaming from the Crab Nebula has its origin in one population of electrons and must be produced in a different way than scientists have traditionally thought.
Daniel Stolte
,
University Communications
Sept. 4, 2017
Resources for the Media

The origin of cosmic rays, high-energy particles from outer space unceasingly impinging on Earth, is among the most challenging open questions in astrophysics.

Discovered more than 100 years ago and considered a potential health risk to airplane crews and astronauts, cosmic rays are believed to be produced by shock waves — for example, those resulting from supernovae explosions. The most energetic cosmic rays streaking across the universe carry 10 to 100 million times the energy generated by particle colliders such as the Large Hadron Collider at CERN. New research published in the Monthly Notices of the Royal Astronomical Society sheds new light on the origin of those energetic particles.

"The new result represents a significant advance in our understanding of particle acceleration at shock waves, traditionally regarded as the main sources of energetic particles in the universe," said the study's lead author, Federico Fraschetti, a staff scientist at the University of Arizona's Departments of Planetary Sciences and Astronomy.

The Crab Nebula, remnant of a supernova explosion that was observed almost 1,000 years ago, is one of the best studied objects in the history of astronomy and a known source of cosmic rays. It emits radiation across the entire electromagnetic spectrum, from gamma rays, ultraviolet and visible light, to infrared and radio waves.

"Most of what we observe comes from very energetic particles such as electrons that did not yet leave the source," said Fraschetti. "Since we can only observe the electromagnetic radiation that they emit from the source itself, we rely on models to reproduce the radiation spectrum we see from the nebula."

The new study, co-authored by Martin Pohl at the University of Potsdam, Germany, revealed that the entire zoo of electromagnetic radiation streaming from the Crab Nebula can arise from a single population of electrons, previously deemed impossible, and that they originate in a different way than scientists have traditionally thought.

According to the generally accepted model, once the particles reach the shock, they bounce back and forth many times due to the magnetic turbulence. During this process they gain energy — in a similar way to a tennis ball being bounced between two rackets that are steadily moving nearer to each other — and are pushed closer and closer to the speed of light. Such a model follows an idea introduced by Italian physicist Enrico Fermi in 1949.

"The current models do not include what happens when the particles reach their highest energy," said  Federico Fraschetti. "Only if we include a different process of acceleration can we explain the entire electromagnetic spectrum we see, and that tells us that while the shock wave still is the source of the acceleration of the particles, the mechanisms must be different."

At the heart of the Crab Nebula lies a pulsar, a rapidly rotating neutron star originating from the explosion of a star a few times more massive than the sun. When it exploded, the star shredded its outer layers, creating the stunning colorscape that makes the Crab Nebula so popular with professional and amateur astronomers. The pulsar emits a wind of electrons and positrons traveling at what astrophysicists call relativistic speed — close to the speed of light.

"Those particles are the fastest things in the universe," Fraschetti said. "Anything we experience in our everyday lives is very far from relativistic effects. But these highly energetic particles still need to be accelerated even more to produce the electromagnetic radiation that we see coming from the Crab Nebula."

That acceleration, scientists believe, happens at a boundary called the termination shock, where the particle wind slams into the cloud of gas and dust that the star blew off into space when it went supernova.

Except that just when the particles become energetic enough to leave the system and become cosmic radiation, they go beyond the limits of the models traditionally used to account for the origin of cosmic radiation, Fraschetti and Pohl found. The authors conclude that a better understanding is needed of how particles are accelerated in cosmic sources, and how the acceleration works when the energy of the particles become very large.

Several NASA missions, including ACE, STEREO and WIND, are dedicated to studying the effects of shocks caused by plasma explosions on the surface of the sun as they travel to Earth. Scientists hope that results from those experiments may shed light on the mechanisms of acceleration in objects such as the Crab Nebula.