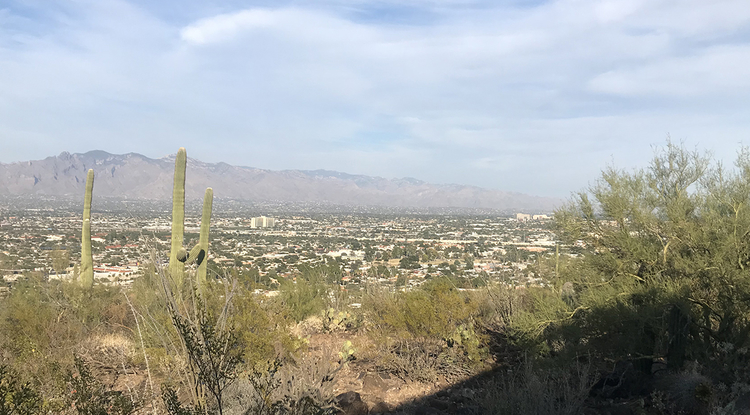 Anywhere from 1,000 to 2,000 daily visitors coexist with a largely unknown number of wildlife on Tumamoc Hill. (Photo: Rachel Abraham)

A student-led effort to document animals and plants living at the popular hiking spot lays the groundwork for renewed conservation efforts and research on Tumamoc Hill for the first time in almost a century.
Rachel Abraham, NASA Space Grant Science Writing Intern
,
University Communications
Feb. 7, 2020
Resources for the Media 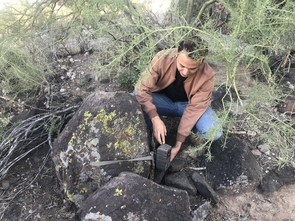 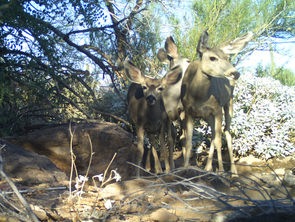 This snapshot of mule deer was taken by a trail camera put in place as part of the student-led monitoring study. (Photo courtesy of the Desert Laboratory) 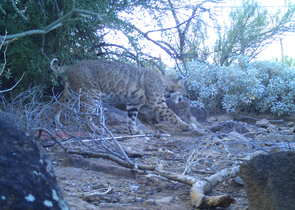 Automated monitoring cameras are more likely than human observers to capture elusive wildlife activity, such as this prowling bobcat. (Photo courtesy of the Desert Laboratory) 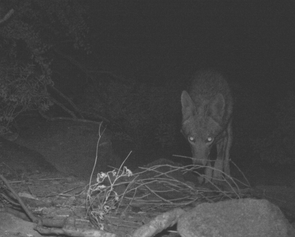 A coyote takes a nocturnal excursion through the shrubby desert. (Photo courtesy of the Desert Laboratory)

On an average day, you'll find Tumamoc Hill crawling with hikers trekking along the smoothly paved trail. Some are there for the scenic views of the city; some are there to take in the natural environment. Many don't realize that the paved trail they are on is actually a road servicing research facilities higher up on the hill.

Jacob Brown, a junior in the University of Arizona School of Natural Resources and the Environment, wants the Tucson community to know that not only was Tumamoc Hill founded to be a site of research, but that important research is still going on today.

"Most people walk through the site and don't even realize what they're looking at," Brown said. "We want people to know that we are here and these buildings are being used."

Brown recently participated in a student-led project to document the hill's biodiversity for the first time in close to 100 years. The project was divided into four groups, each focusing on different organisms: mammals, birds, lizards and plants.

While there has been research on plants since the founding of the Desert Laboratory on Tumamoc Hill in 1903, little has been done to document wildlife. The students were tasked with establishing a starting point for species richness and abundance so changes can be observed over time.

For the mammal group, this required sifting through 90,353 images captured by 12 motion-triggered cameras to detect wildlife. Of those photos, 8,720 depicted animals and 2,256 were regarded as "independent events," meaning it was the first time an individual animal was photographed.

Students discovered there are 12 focal species in the Tumamoc Hill area, although they suspect a few might be missing, primarily ring tail, grey fox, skunk and mountian lion. The most widely distributed species? Peccaries, bobcats, mule deer and humans.

"Learning more about the diversity on the hill really gives you a greater appreciation of deserts," said College of Agriculture and Life Sciences student researcher Humberto Gurrola, who documented mammals during the study. "We truly have a forest here, even if it doesn't fit with the stereotypes of a jungle."

Students in the lizard and bird groups obtained their data by visiting the site and directly observing the animals. For those observing lizards, that meant walking six paths spanning three different habitat types starting at 6 a.m., noting when they observed a certain species of lizard.

Most of the animals found confirmed the researchers' predictions, and that was a positive sign for those concerned with threats from non-native species. However, some observations did come as a surprise.

A desert iguana was spotted during one walk, making it the eastern-most sighting of the species in the United States. The regal horned lizard, or tumamoc in the Tohono O'odham language, was not observed, despite being the namesake of the hill.

Student researcher Mallary Parker developed a particular interest in birds after taking part in the study.

"The hill has a great representation of classic native species found in the area, including some critical species such as the elf owl and purple martin," Parker said, adding that her favorite find was "definitely the gamble's quail."

Brown, who was in the plant phenology group, took his project to a whole new level. In addition to collecting data about how the plants changed over time, he began to involve the community in his work.

"Involving citizen scientists was a huge part of my side of the project," Brown said. "Every Saturday morning at 7:30, I was at the bottom of the hill in my reflective vest, and people joined me to walk the hill and look at plants together."

In fall 2019, students had the opportunity to present their findings as part of the Tumamoc Lecture Series, which takes place monthly at the Desert Laboratory on Tumamoc Hill. Engaging with the broader community has been crucial in the vision of the Desert Laboratory's director, Benjamin Wilder.

"The Desert Laboratory has always been a place of learning throughout history, especially student learning, student engagement and hands-on opportunities through the University of Arizona," Wilder said. "However, that has decreased in the past. This project is the first formalized effort to bring back these types of activities."

The students' work is funded by the University of Arizona Green Fund, which allocates up to $400,000 per year from student tuition for projects that make the university a more sustainable place to work, learn and live. This specific project focused on ecological sustainability – making sure the local environment is documented, monitored and protected.

"This information is vital to the understanding of Tumamoc Hill, and it being student-led is all the more exciting," Wilder said.