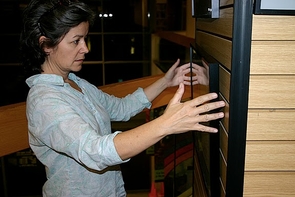 Adela C. Licona, a member of FARR and a UA faculty member, prepares a photo exhibition hosted by the group.

FARR members Jenna Vinson and Rebecca Richards with Vivyan Adair (center), who visited the UA to speak during one of the group's events. 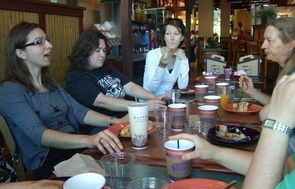 A group that began as a way for faculty members and graduate student researchers to support one another in an academic exchange has grown into a coalition that promotes feminist research and community action.

Some members of the coalition, commonly referred to as FARR, acknowledge that their work is somewhat unconventional – as researchers, they do not merely study communities but involve people in action meant to empower individuals.

Members argue that such community action is crucial, particularly related to issues that have traditionally been difficult to digest in the mainstream. These topics include poverty, education, race, the construction of gender and identity, reproduction and the general marginalization of people.

"Responsible rhetorical action could potentially help our community. We wanted to maintain a group where we could come to the table and engage in ideas," said Jenna Vinson, a graduate student of rhetoric, composition, and the teaching of English and also gender and women's studies.

"There is a lot to learn from and to engage rhetorically with the community. I learned this from young mothers who tell me their struggles,” Vinson said. “It’s about being attentive to the needs of the community.”

That's taking a research and activist approach. "We are not separate from the community. We are part of it," she said.

Chiefly, the group's members – who are currently planning for an upcoming speaker series – work to address social issues in Tucson and attempt to deconstruct concepts related to identity.

For instance, one of the group's events addresses ways in which low-income and young mothers are typecast and misrepresented in the media. The group also has discussed issues related to immigration reform, having addressed concerns with Senate Bill 1070 and House Bill 2162.

"Personally, I am very interested in the community coalitional aspect," said Vinson, who studies rhetoric around teenage pregnancy.

Members, called "FARRistas," define themselves as feminist scholars and activists who actively engage people on and off campus in "public scholarship." Rooted in feminist ideology, such an approach respects that knowledge is derived at multiple levels, not merely in an academic arena.

"A lot of times, feminist work is not quantifiable in terms of tenure or a book," said Rebecca Richards, a doctoral degree candidate in rhetoric, composition, and the teaching of English. "So it is an important function to create that space."

Other members include Denise Burgess, Regina Kelly, Marissa Juárez and Amanda Wray, students studying rhetoric, composition, and the teaching of English; Katrina Jaogdinsky, a graduate student in the history department; and Amy Schaller, an evaluation specialist and graduate student in the Norton School of Family and Consumer Sciences.

"What I am most excited about is the coalitional support of feminists on campus coming together across disciplinary, color, class and disability lines," Richards said. "It's difficult work, but exciting."

Adair's presentation, in particular, enabled the group to "start to practice the relationship we were trying to build between the academy and the local community," said Adela C. Licona, a UA assistant professor of rhetoric, composition and the teaching of English who co-founded FARR.

During Adair's visit, FARR hosted a public talk and Adair's photo exhibition, involving members of the public at both events. The group did the same during Jacobs' visit.

"I was surprised to see so many people connect and have a difficult conversation that needed to be had," Richards said, emphasizing the male-to-female conversations about balancing education and parenting.

"From then, we realized we have a lot of work to do."