An artist’s impression of a very distant quasar powered by a black hole with a mass 2 billion times that of the sun (Credit: ESO/M. Kornmesser)

A four-year effort involving UA students helped a team of astronomers measure the masses of a large sample of supermassive black holes in the farthest reaches of the universe. As part of a robotic telescope network in southern Arizona, instruments such as the Bok Telescope could play a crucial role in future "grand challenge" science endeavors.
Daniel Stolte
,
University Communications
Jan. 11, 2018
Resources for the Media 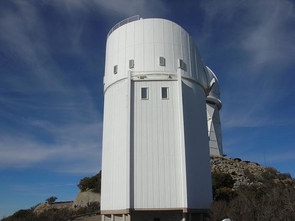 The Bok Telescope on Kitt Peak is the largest telescope operated solely by the UA's Steward Observatory. Named in honor of Bart Bok, who was Steward's director from 1966-1969, the telescope operates every night of the year except Christmas Eve and a maintenance period scheduled during the summer rainy season. (Image: Wikimedia Commons)
An artist's rendering of the inner regions of a quasar, with a supermassive black hole at the center surrounded by a disk of hot material falling in. The two light curves at the bottom illustrates how astronomers use reverberation to map black holes. (Image: Nahks Tr'Ehnl and Catherine Grier/Penn State, SDSS)

By today's standards, the University of Arizona's Bok Telescope, perched on Kitt Peak southwest of Tucson, is a small telescope: Its primary mirror stands a mere five inches taller than Dušan Ristić, the 7-foot center of the UA men's basketball team.

Yet, despite its modest size and advanced age of almost 50 years, the instrument keeps churning out big science, helping us unravel some of the biggest questions about the cosmos. Using observations made with the Bok Telescope, a team of astronomers managed to directly measure the masses of an unprecedented number of the universe's most distant supermassive black holes, also called quasars. Lurking in the centers of nearly every large galaxy, these Leviathans range from 5 million to 1.7 billion times the mass of the sun.

"This is the first time that we have directly measured masses for so many supermassive black holes so far away," said Catherine Grier, a postdoctoral fellow at the Penn State University, who led the research. "These new measurements, and future measurements like them, will provide vital information for people studying how galaxies grow and evolve throughout cosmic time."

The results, presented at the American Astronomical Society meeting in National Harbor, Maryland, are published in the Astrophysical Journal and represent a major step forward in our ability to measure supermassive black hole masses in large numbers of distant quasars and galaxies. In addition to the Bok Telescope, the project used the Sloan Digital Sky Survey, or SDSS, and the Canada-France-Hawaii Telescope, or CFHT, atop Hawaii's Mauna Kea volcano.

"The Bok Telescope provided key data that allow measurement of how the quasars vary over time, which tells us about the size of the light-emitting region around the black hole," said Xiaohui Fan, a Regents' Professor of Astronomy at the UA's Steward Observatory and a member of the Sloan Digital Sky Survey. "The data is then used to determine the mass of the black hole."

The Bok Telescope's large field of view, combined with the sensitive detectors, means that astronomers can monitor many quasars at the same time, a feat that is crucial to establish the large sample used in the study.

"This result shows that the Bok can still produce world-class results," said Ian McGreer, an assistant astronomer at Steward and one of the study's authors, who managed the observations with the Bok Telescope. "We got involved because the SDSS did a survey of facilities that could support this program, and the Bok came out as one of the few with the required capabilities."

The Bok investment was quite substantial, McGreer explained, with more than 100 nights spread over four years so far.

"The data in this paper are based on the first year, 2014, when the monitoring was the most intense," he said. "Sixty nights that year were covered by a rotating cast of observers, many of whom were UA undergrads, grads and visiting students.

"The Bok does not have a nighttime operator, which means the students received valuable training not only in collecting the data and operating the instrument, but in learning how to operate a telescope at night. This is a fairly rare opportunity these days."

As they suck in nearby dust and gas, supermassive black holes heat the material to such high temperatures that it glows brightly enough to be seen all the way across the universe. These bright disks of hot gas are known as quasars, and they are clear indicators of the presence of supermassive black holes. By studying these quasars, we learn not only about supermassive black holes, or SMBHs, but also about the distant galaxies they live in. But to do all of this requires measurements of the properties of the SMBHs, most importantly their masses.

Measuring the masses of extragalactic SMBHs — in this study, up to 8 billion light-years away — is a daunting task and requires a technique called reverberation mapping. Reverberation mapping works by comparing the brightness of light coming from gas very close in to the black hole (referred to as the "continuum" light) to the brightness of light coming from fast-moving gas farther out. Changes occurring in the continuum region impact the outer region, but light takes time to travel outward, or "reverberate." By measuring this time delay, astronomers can determine how far out the gas is from the black hole. Knowing that distance allows them to measure the mass of the supermassive black hole — even though they can't see the details of the black hole itself.

In this new work, the team used an industrial-scale application of the reverberation mapping technique, with the goal of measuring black hole masses in tens to hundreds of quasars. These new SDSS measurements increase the total number of active galaxies with SMBH mass measurements by about two-thirds, and push the measurements farther back in time to when the universe was only half of its current age.

The key to the success of the SDSS reverberation mapping project lies in the SDSS' ability to study many quasars at once — the program is currently observing 850 quasars simultaneously. But even with the SDSS' powerful telescope, this is a challenging task because these distant quasars are incredibly faint.

"You have to calibrate these measurements very carefully to make sure you really understand what the quasar system is doing," said Jon Trump, an assistant professor at the University of Connecticut and a member of the research team.

Observing the quasars over the same season with the Bok Telescope and the CFHT improved these calibrations, allowing the team to find reverberation time delays for 44 quasars and use the time delay measurements to calculate black hole masses that range from about 5 million to 1.7 billion times the mass of our sun.

In the words of McGreer, the future is bright for this kind of work, with plans to develop a robotic telescope network in southern Arizona using telescopes such as the Bok, which could help guide efforts to combine such a network with "grand challenge" science projects like the Large Synoptic Survey Telescope, or LSST. Slated to begin operations in 2023, the LSST will conduct an unprecedented 10-year survey, repeatedly imaging every part of the visible sky every few nights. The heart of the instrument, a 8.4-meter primary mirror, was cast and polished at the UA's Richard F. Caris Mirror Lab.

"The lessons learned from this reverberation mapping project serve as a pathfinder, or proof of concept, for something that could be done on a much larger scale when LSST arrives," McGreer said.

The Sloan Digital Sky Survey contributed to this story.