Study: Better Odds That Life Crashed to Earth From Space

New findings provide the strongest support yet for the idea that basic life forms are distributed throughout the universe via meteorite-like planetary fragments cast forth by disruptions such as planet and asteroid collisions.
Morgan Kelly/Princeton University and Daniel Stolte/UANews
Sept. 24, 2012
Resources for the Media
Extra Info: 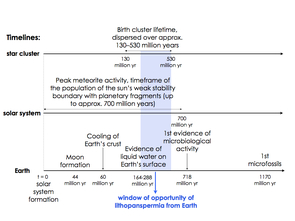 This timeline shows that ideal conditions for lithopanspermia in the sun's birth cluster, in the solar system and on Earth overlapped for several hundred million years

Chunks of rock laced with ingredients for life or early life forms could have traveled among our solar system and others much more frequently than previously thought possible, an international team of researchers including Renu Malhotra in the University of Arizona Lunar and Planetary Laboratory has discovered.

The researchers report in the journal Astrobiology that under certain conditions, there is a high probability that life came to Earth – or spread from Earth to other planets – during the solar system's infancy when Earth and its planetary neighbors orbiting other stars would have been close enough to each other to exchange lots of solid material.