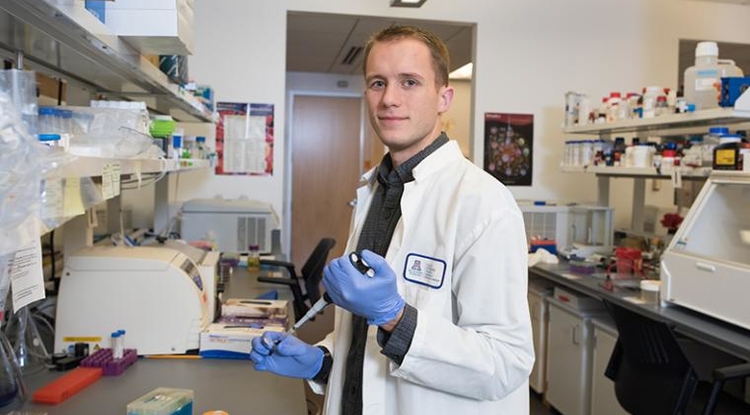 UArizona researchers have discovered a protein function that could improve current therapeutic solutions for millions of women who live with genital herpes.
Teresa Joseph
,
College of Medicine – Phoenix
Oct. 30, 2019
Resources for the Media

Researchers at the University of Arizona College of Medicine – Phoenix have discovered a function in a pro-inflammatory protein that could play an important part in improving current and future therapeutics for the herpes virus.

The study, published in October in the Journal of Immunology, investigated whether the protein IL-36g is an essential component of the immune response to a herpes infection, or if other mechanisms can compensate for the lack of IL-36g.

Cytokines, proteins essential to the immune system, coordinate the response to pathogens and allow for cell-to-cell communication. IL-36g is a pro-inflammatory cytokine identified 20 years ago. Over the years, researchers have shown that it exhibits an important function in chronic inflammatory diseases, but only recently have scientists studied its role in infectious diseases such as herpes.

“We were the first group to detect IL-36g in the female reproductive tract and have been extending this work to evaluate the extent that this molecule can protect against, or contribute to, genital infection,” said Melissa Herbst-Kralovetz, senior and corresponding author of the study and associate professor in the Department of Basic Medical Sciences.

“Researchers have worked for decades to develop a vaccine to protect against genital herpes, but none has successfully passed through clinical trials,” said lead author Jameson Gardner, a graduate research student in Herbst-Kralovetz's laboratory.

Despite the widespread use of antiviral medications to treat genital herpes, more than 260 million women worldwide are living with this lifelong infection and transmitting it to new individuals daily.

After the initial genital herpes simplex virus 2, or HSV-2, infection in the vaginal epithelium, the virus spreads through the nervous system, where it establishes latency. The virus goes into “hiding,” where it persists for a lifetime and periodically reactivates, causing lesions.

“We really were excited to see that after intravaginal HSV-2 infection, the virus was able to spread systemically throughout the nervous system and to the brain in those lacking IL-36g, whereas our control group, which had the gene intact, was significantly more protected against HSV-2 spread in the nervous system,” Gardner said. “We’ve shown that IL-36g appears to function in a previously uncharacterized manner to protect against virus neuroinvasion (an infection that affects the nervous system).”

“We stumbled across this neuroinvasion finding and we were able to confirm that IL-36g is limiting the spread of virus from the genital tract to the nervous system,” Herbst-Kralovetz said.

The precise mechanism in which IL-36g protects against neuroinvasion is unknown, but is an exciting and important area of future research.

In addition, researchers concluded IL-36g played a critical role in recruiting neutrophils, a type of white blood cell that protects against invading pathogens.

“Our understanding of how IL-36g functions can aid in the development of novel therapeutics to protect against – and hopefully decrease – the burden of STIs around the world,” Gardner said.

“The global disease burden of sexually transmitted infections is huge, and this work helps us to better understand the role IL-36g plays in the female reproductive tract and how that could impact women’s health in general.”

The research was funded by grants from the National Institutes of Health (1R15AI113457-01A1) and the Valley Research Partnership Grant P12.

A version of this article originally appeared on the College of Medicine – Phoenix website: https://phoenixmed.arizona.edu/newsroom/news/study-finds-inflammatory-protein-can-protect-against-spread-herpes-virus