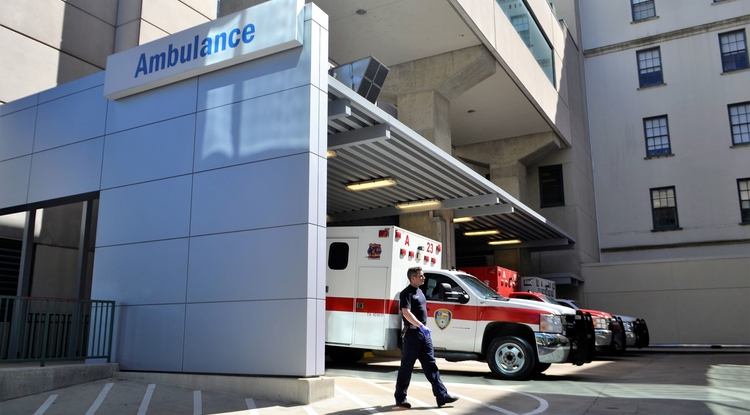 After completing research that showed high suicide rates among EMTs, a UA medical student created a resiliency website for emergency workers and developed partnership with forest firefighters to measure its effectiveness.
Teresa Joseph
,
UA College of Medicine – Phoenix
Sept. 26, 2018
Resources for the Media

Arizona emergency medical technicians’ risk for suicide is 39 percent higher than the general public, according to a new study conducted by University of Arizona College of Medicine – Phoenix researchers.

“Although we were bracing ourselves to find an increase in suicides among our EMTs, I was really shocked that it was that large,” said Vigil, who is also a Tillman Scholar. “These findings help move the discussion of EMT suicide beyond the anecdotal and personal experiences and adds hard data showing there is a problem that needs to be addressed.”

After seeing the surprising results, Vigil said he wanted to act immediately to find effective solutions. He worked with the Arizona Department of Health Services to develop an emergency medical services resiliency website that presents educational materials and resources to help build resiliency and reduce EMS suicide.

Then, Vigil teamed up with the Golder Ranch Fire District, near Tucson’s Mount Lemmon, to measure the effectiveness of resiliency training.

Vigil and Bobrow also are exploring the potential to incorporate resiliency and suicide-prevention training into the EMT certification process at the state level.

Suicide rates among the general population steadily have increased, with suicide now ranking in the nation’s top 10 overall causes of death. While EMTs have abnormally high suicide rates, little peer-reviewed research exists on the topic.

“On the worst days of our life, we know that firefighters and EMS professionals stand ready to respond at a moment’s notice, even at the risk of their own personal safety,” Vigil said. “They are community heroes who sacrifice an incredible amount to be there for us in our time of need. I feel that it’s our community’s duty to help identify and minimize the risks associated with their service. As a former U.S. Army medic and EMT myself, this subject really connects with me on a personal level.”

In 2014, a large North American survey conducted by the National Registry of Emergency Medical Technicians was published, suggesting EMTs have a 10-fold higher incidence of suicidal ideation and suicide attempts. Around the same time, the Arizona community had experienced several EMT suicide deaths.

“We started by asking the basic question, ‘What is the suicide rate of EMTs in Arizona?’” Bobrow said. “As our research team began to try to answer this question, we realized that, while simple, it was not an easy question to answer because there is no sole-source EMT suicide database.”

“It was extremely laborious, and imperfect, but it was a way we at least could estimate the true scope of this problem,” Bobrow said.

Their data set covered a five-year period ending in December 2015. Vigil started the research last fall as part of his UA College of Medicine – Phoenix scholarly project, with Bobrow serving as his mentor. The study was presented at the National Association of Emergency Medical Services Physician’s meeting in January and was recently published online in Prehospital Emergency Care.

“We were surprised at how many actual EMT suicides we found every year in Arizona – on average nine per year,” Bobrow said. “Each one is a tremendous tragedy and made our study very personal for us. We were very motivated to publish this paper and to work toward improving this horrible situation.”

They hypothesize that the causes of the high suicide rates are multi-factorial and likely are related to work stress, shift work, a culture of not wanting to ask for help, repeated exposure to seeing suicide and other tragedies, among other factors.

A version of this article originally appeared on the UA Health Sciences website: http://opa.uahs.arizona.edu/newsroom/news/2018/ua-study-reveals-arizona-emts-face-39-percent-greater-risk-suicide