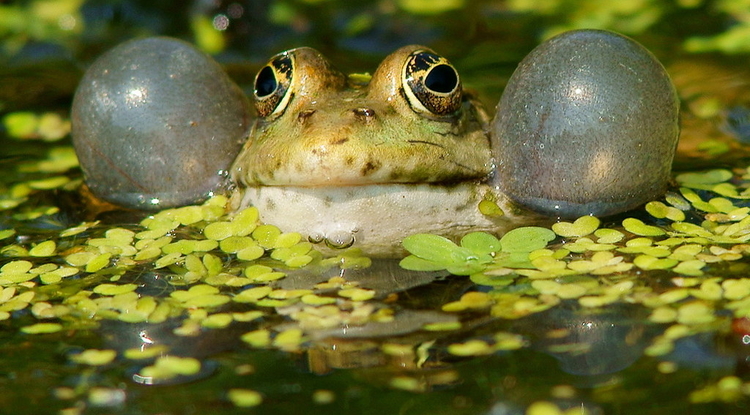 Frogs, like mammals, originated as predominantly nocturnal animals, but maintained the ability to communicate acoustically after switching to being active during the day. (Photo: Peter Trimming)

A study tracing acoustic communication across the tree of life of land-living vertebrates reveals that the ability to vocalize goes back hundreds of millions of years, is associated with a nocturnal lifestyle and has remained stable. Surprisingly, acoustic communication does not seem to drive the formation of new species across vertebrates.
Daniel Stolte
,
University Communications
Jan. 17, 2020
Resources for the Media 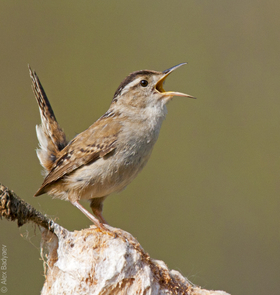 Birds, like this marsh wren, rely heavily on acoustic communication to stake out territories and attract mates. (Photo: Alex Badyaev/University of Arizona)

Imagine taking a hike through a forest or a stroll through a zoo and not a sound fills the air, other than the occasional chirp from a cricket. No birds singing, no tigers roaring, no monkeys chattering – and no human voices, either. Acoustic communication among vertebrate animals is such a familiar experience that it seems impossible to imagine a world shrouded in silence.

But why did the ability to shout, bark, bellow or moo evolve in the first place? In what is likely the first study of its kind, John J. Wiens, a professor of ecology and evolutionary biology in the University of Arizona College of Science, and Zhuo Chen, a visiting scientist from Henan Normal University in Xinxiang, China, traced the evolution of acoustic communication in terrestrial vertebrates back to 350 million years ago.

The authors assembled an evolutionary tree for 1,800 species showing the evolutionary relationships of mammals, birds, lizards and snakes, turtles, crocodilians, and amphibians going back 350 million years. They obtained data from the scientific literature on the absence or presence of acoustic communication within each sampled species and mapped it onto the tree. Applying statistical analytical tools, they tested several ideas: whether acoustic communication arose independently in different groups and when; whether it is associated with nocturnal activity; and whether it tends to be preserved in a lineage.

The paper, "The origins of acoustic communication in vertebrates," was published in the open-access journal Nature Communications today. The study revealed that the common ancestor of land-living vertebrates, or tetrapods, did not have the ability to communicate through vocalization – in other words, using their respiratory system to generate sound as opposed to making noise in other ways, such as clapping hands or banging objects together. Instead, acoustic communication evolved separately in mammals, birds, frogs and crocodilians in the last 100-200 million years, depending on the group.

The study also found that the origins of communication by sound are strongly associated with a nocturnal lifestyle. This makes intuitive sense, because once light is no longer available to show off visual cues such as color patterns to intimidate a competitor or attract a mate, transmitting signals by sound becomes an advantage.

Extrapolating from the species in the sample, the authors estimate that acoustic communication is present in more than two-thirds of terrestrial vertebrates. While some animal groups – birds, frogs and mammals, for example – readily come to mind for their vocal talents, crocodilians as well as a few turtles and tortoises also have the ability to vocalize.

Interestingly, the researchers found that even in lineages that switched over to a diurnal (active-by-day) lifestyle, the ability to communicate via sound tended to be retained.

"There appears to be an advantage to evolving acoustic communication when you're active at night, but no disadvantage when you switch to being active during the day," Wiens said. "We have examples of acoustic communication being retained in groups of frogs and mammals that have become diurnal, even though both frogs and mammals started out being active by night hundreds of millions of years ago."

According to Wiens, birds kept on using acoustic communication even after becoming diurnal for the most part. Interestingly, many birds sing at dawn, as every birdwatcher can attest. Although speculative, it is possible that this "dawn chorus" behavior might be a remnant of the nocturnal ancestry of birds.

In addition, the research showed that acoustic communication appears to be a remarkably stable evolutionary trait. In fact, the authors raise the possibility that once a lineage has acquired the ability to communicate by sound, the tendency to retain that ability might be more stable than other types of signaling, such as conspicuous coloration or enlarged, showy structures.

In another unexpected result, the study revealed that the ability to vocalize does not appear to be the driver of diversification – the rate at which a lineage evolves into new species – it has been believed to be.

To illustrate this finding, Wiens pointed to birds and crocodilians: Both lineages have acoustic communication and go back roughly 100 million years, but while there are close to 10,000 known bird species, the list of crocodilians doesn't go past 25. And while there are about 10,000 known species of lizards and snakes, most go about their lives without uttering a sound, as opposed to about 6,000 mammalian species, 95% of which vocalize.

The authors point out that their findings likely apply not only to acoustic communication, but also to other evolutionary traits driven by the ecological conditions known to shape the evolution of species.  While it had been previously suggested that ecology was important for signal evolution, it was thought to apply mostly to subtle differences among closely related species.

"Here, we show that this idea of ecology shaping signal evolution applies over hundreds of millions of years and to fundamental types of signals, such as being able to communicate acoustically or not," Wiens said.