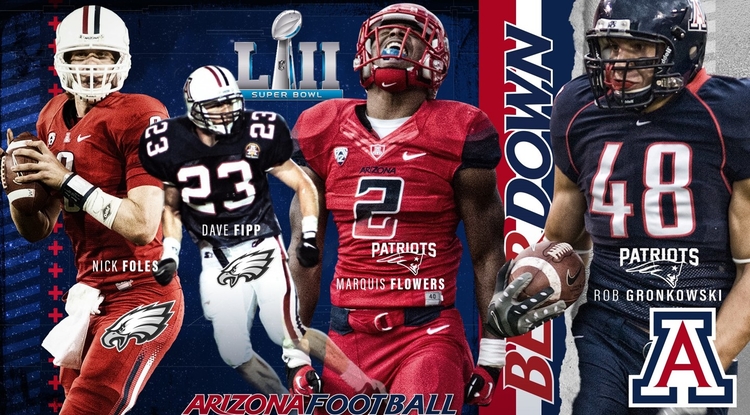 Super Bowl Has UA Written All Over It

Can the Philadelphia Eagles (with Nick Foles and Dave Fipp) knock off the New England Patriots (with Rob Gronkowski and Marquis Flowers)? Wildcat football fans will be watching the big game with interest.
Arizona Athletics
Jan. 29, 2018
Resources for the Media
What:
Super Bowl LII
When:
Kickoff at 4:30 p.m. Sunday (NBC)
Where:
U.S. Bank Stadium, Minneapolis

Pardon those around these parts who don't consider Super Bowl LII as Eagles vs. Patriots, Brady vs. Foles or any other national storyline.

Indeed, Sunday's Super Bowl will have quite the Wildcat theme to it, especially if you're looking on through the red-and-blue lens of University of Arizona football fans.

Yet, UA football players are no strangers to the biggest game of the year in American sports. In fact, it has been 47 years since Ron Gardin became the first former Wildcat to play in a Super Bowl. He was a punt returner and defensive back for the Baltimore Colts, who edged the Dallas Cowboys, 16-13, in Super Bowl V.

Since Gardin, 26 former UA football players have followed in his footsteps to play in the Super Bowl, and they've combined for 45 total appearances. Those numbers are soon to increase, as this year three former Wildcats are expected to play in Super Bowl LII, with a fourth on one of the coaching staffs.

While the UA has had three and even four players in the same Super Bowl on multiple occasions, you'd be hard-pressed to find a year when a Wildcat is among the top storylines on each side — as is the case this year.

Two Cats on Each Sideline

The headliner of the UA' latest Super Bowl class is Rob Gronkowski, the star tight end of the New England Patriots, who, if he is cleared to play following a concussion, will play in his fourth Super Bowl. Gronkowski is one of the most dynamic players in the NFL and has scored a touchdown this postseason. His teammate, linebacker Marquis Flowers, is set for his Super debut and has five tackles and a sack in two postseason games.

On the other sideline, the UA's all-time passing leader, quarterback Nick Foles, will lead the Philadelphia Eagles in their quest for the franchise's first Super Bowl victory. His postseason play as the Eagles' starter in place of the injured Carson Wentz has been brilliant, with 598 yards passing, three touchdowns, no interceptions and a rating of 122.1. He will be joined by a mid-1990s Wildcat standout, Dave Fipp, who is the Eagles' special-teams coach.

Each of the aforementioned Wildcats found a unique path to the NFL and this year's big game.

Gronkowski, like Gardin decades earlier, came across the country to wind up in Tucson. A native of Amherst, New York, he attended Churchill Woodland Hills High School in Pennsylvania, signed with Arizona and arrived as a highly touted prospect for the 2007 season.

In his true-freshman season, Gronkowski played in a dozen games, catching 28 passes for 525 yards and six touchdowns. As a sophomore, he nearly doubled his receptions to 47, despite playing in only 10 games. He scored 10 touchdowns and helped lead the Wildcats to the Las Vegas Bowl — the program's first bowl appearance in a decade.

An offseason back injury forced Gronkowski to miss the entire 2009 season, and he declared for the NFL Draft shortly thereafter. Still, his career totals of 75 receptions for 1,197 yards and 16 touchdowns remain the best numbers in school history for a tight end.

The back injury robbed college football fans of a chance to see a great quarterback-receiver duo, even if they didn't realize it at the time. The same year that Gronkowski missed his junior season, Foles was emerging as the most prolific passer in UA history.

Foles: From Texas to Tucson

Foles, a native of Austin, Texas, originally committed to Arizona State but eventually signed with Michigan State, where he played briefly in 2007. He then transferred to the UA and sat out the 2008 season, when Gronkowski was an All-American.

It took Foles three games into the 2009 season to become Arizona's starter — but once he did, he never gave up the job, even without the benefit of throwing to Gronkowski. In his three seasons as a starter, Foles shattered numerous school passing records and became the first player in program history to top 10,000 yards, finishing with 10,011. As a senior, he passed for a school-record 4,334 yards for the nation's fourth-best passing offense.

Overlapping with Foles on the Wildcat roster in 2010-2011 was Flowers, a highly recruited safety who later shifted to linebacker. While less heralded throughout his college career than Foles or Gronkowski, Flowers produced impressive numbers and blossomed into a sought-after pro prospect.

In four seasons, Flowers played in 50 games and racked up 272 tackles, including 27 for loss along with five sacks. He bridged the coaching staffs of Mike Stoops and Rich Rodriguez while helping the Wildcats to bowl victories in 2012 and 2013 before he was drafted by the Cincinnati Bengals in the sixth round of the 2014 draft. The native of Goodyear, Arizona, joined the Patriots this season.

The final piece of Arizona's Super Bowl LII connections is Fipp, who, despite never playing professionally, always seemed destined for greatness as a coach. A native of Albuquerque, New Mexico, Fipp joined the Wildcats as a walk-on for head coach Dick Tomey in 1994, and by 1995 he led the special-teams unit in tackles. He then earned a scholarship and became a two-year starter as a free safety for the 1996-1997 seasons. The 1997 Wildcats were one of the top defensive units in the Pac-10 Conference and ranked 12th nationally defending the run.

Once his college career was over, Fipp began his coaching career at Holy Cross. He returned to the UA as a graduate assistant under Tomey in 2000 and stayed connected with his former coach even after Arizona. Tomey, the UA's winningest head coach, later coached at San Jose State (2005-2009), where he hired Fipp as a co-defensive coordinator for 2005-2006 before promoting him to defensive coordinator in 2007.

Fipp's NFL coaching career began in 2008 as a special-teams assistant with the San Francisco 49ers, where he spent three seasons. He then joined the Miami Dolphins for the 2011-2012 seasons in a similar role before heading the Philadelphia, where he has since been the Eagles' special-teams coordinator since 2013.

One thing is certain: Arizona football will win on Sunday in Minneapolis.