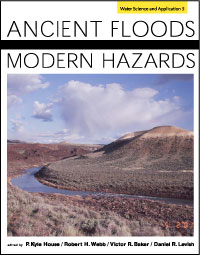 Around 15,000 years ago, as the last ice age was melting down, you didn't want to be standing in Idaho's Clark Fork River Valley. Giant glacial Lake Missoula stretched 174 miles behind an ice dam ready to burst.

When the 2,000-foot-high ice dam did go, the lake surged downstream with a flow ten times greater than the flow from all the world's present rivers combined. The massive flood cut deep canyons, stripped away soils, and carried boulders all the way from Idaho to what is now Portland, Ore. In 48 hours, it transformed the landscape of the Pacific Northwest.

Geologists call this a superflood. Several occurred at the end of the last ice age. Others have happened in Iceland within human history when volcanoes have heated glaciers. Still other superfloods occurred on Mars, according to recent analysis of spacecraft photos.

Victor Baker, department head in Hydrology and Water Resources at the University of Arizona in Tucson, has spent much of his career studying superfloods. In this month's issue of "Science" magazine, he looks at why the topic of superfloods has been and remains controversial among geologists.

First, there's uniformitarianism, which postulates that the landscape we see today was formed gradually by the everyday processes that we see around us. Uniformitarianism says canyons and valleys are formed over tens of thousands of years, not in a few hours by catastrophic floods. And this is largely true. But earth scientists now have shown that catastrophic superfloods do occur and the landscape transformed in a matter of hours. As evidence has mounted during the past few decades, the debate over this part of the controversy has waned.

But much controversy still remains over the magnitude of these floods, their timing and the extent to which they differ from floods that scientists can observe and measure today.

Studying the paleohydrology of superfloods represents a completely different approach to science, Baker says. Typically, scientists think about generalizing from data gathered from large numbers of events. "To really understand superfloods, you need to see them as unique individuals that tell us about the characteristics of this kind of flooding," he says.

Superfloods aren't just bigger versions of small-scale floods, he notes. They behave differently. They release huge amounts of energy in a brief period of time, leading to turbulence that causes erosion and sediment transport that are vastly different from that experienced in small-scale floods.

"There is a threshold effect," Baker observes. "There are things that happen in terms of energy expended that change because of the immensely greater magnitude of the event."

"Superflood studies are motivated by a notion introduced by Whewell, who proposed in 1840 that productive scientific hypotheses work toward achieving 'consilience,' a kind of confirmation through the unexpected connections and explanatory surprises they engender," Baker writes in "Science."

This kind of talk sets some geologists' teeth on edge because it doesn't build a theory from observation of large numbers of phenomena, but produces an explanation by comparing similar, but individualistic events.

"In the study of superfloods, we don't have a theory," Baker says. "We made discoveries about how this completely unknown phenomenon works. Each is viewed as an individual event. Eventually, we may find enough of these to form a theory."

Conventionally, scientists have observed and measured floods that are accessible. Then they have extrapolated that data to really big floods. Scientists studying superfloods are going the other way. They look at the unique signatures of individual floods that are much larger than anything directly observed by modern scientists.

"If we understand superfloods at extremely large scale and extrapolate this downwards, we are headed toward the place where those who measure observable floods are extrapolating up to," Baker says. "If the two extrapolations meet, there is a better chance that we will have a good understanding of how floods operate from the very smallest to the very largest."

Baker's article on superfloods and comments on the controversy surrounding them appears in the "Perspectives" column in "Science." This column often draws attention to current literature. In this case, it's a book just published by the American Geophysical Union, "Ancient Floods, Modern Hazards: Principles and Applications of Paleoflood Hydrology."

The book notes that a basic flaw in flood science is that predictions of flood hazards are based on less than 100 years of gauging data. One of the biggest benefits of paleoflood hydrology -- which includes superfloods -- is that reconstruction of floods that have occurred over thousands of years establishes a long-term context for our short-term hydrologic records. This greatly increases our ability to more accurately estimate flood hazards.

The authors note that flood damages in the United States continue to increase despite increased spending for flood control and mitigation. This suggests that new methods for estimating and characterizing flood hazards are needed.