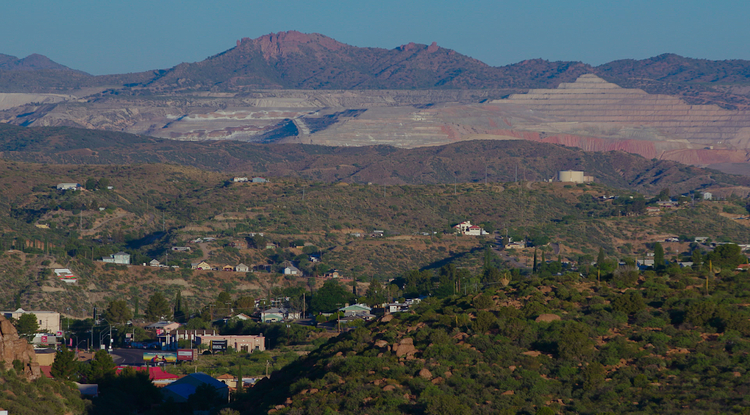 The center, since 1989, has helped address the state's most pressing environmental contamination sites.
Rosemary Brandt and Caroline Mosley
,
College of Agriculture and Life Sciences
June 30, 2020
Resources for the Media 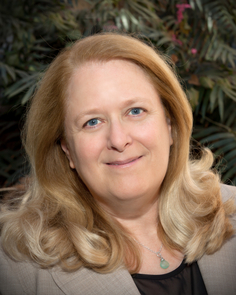 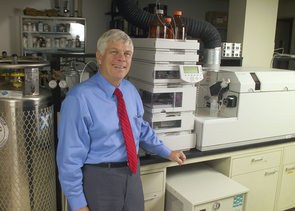 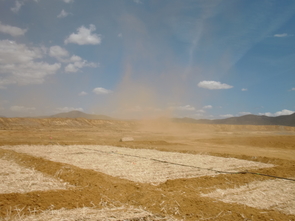 A windy morning showing dust blowing from the tailings site at the Iron King Mine. (Photo courtesy of Raina Maier) 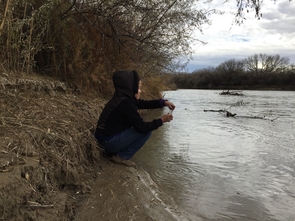 Working to understand mine waste systems and their relationship to human and environmental health, the University of Arizona Superfund Research Center will explore the link between chronic exposure to arsenic and the development of diabetes, thanks to a $10.6 million grant from the National Institute of Environmental Health Sciences.

The national agency has previously provided more than $90 million dollars to the university's Superfund Research Center to help address the state's most pressing environmental contamination sites, said Raina Maier, center director and a professor of environmental science in the College of Agriculture and Life Sciences.

Previous research done through the university's Superfund Research Center, which was established in 1989, resulted in technology to detect and clean up arsenic, trichloroethylene and other contaminants across Arizona, while empowering affected communities and bolstering public understanding of potential health risks.

The new funding will allow researchers to build on that history to understand how arsenic-laden mining waste weathers across Southwestern climates and affects toxicity and absorption in the human body, with a continued focus on improving remediation efforts designed to reduce potential exposure in communities neighboring active and legacy mining sites.

"As a land-grant institution, the University of Arizona has a responsibility to work with our local communities and help enhance health and quality of life for people in Arizona through research and education," said University of Arizona President Robert C. Robbins. "This renewed grant will allow our researchers to continue some of the very important work they are doing that reflects the University's commitment to make mining as an industry more compatible with the environment and society."

Led by Maier and associate director Donna Zhang, the university's Superfund Research Center brings together 18 co-principal investigators spanning five colleges, including the College of Agriculture and Life Sciences, College of Medicine, College of Pharmacy, Mel and Enid Zuckerman College of Public Health, and College of Science.

"This renewal will allow us to build on the amazing community- and industry-based stakeholder interactions we have nurtured over the years to understand mine waste arsenic exposures and co-design real-world solutions for preventing exposures, addressing health issues and developing cleanup strategies," Maier said. "By working together, we create solutions that are both economical and have high stakeholder acceptance."

Born out of growing awareness and heightened public health concerns surrounding unregulated toxic-waste dumping in communities such as New York's Love Canal and Kentucky's Valley of the Drums, the Environmental Protection Agency's Superfund program was established in 1980 to investigate and clean sites contaminated with hazardous substances. The program created the first National Priorities List classifying 406 sites as priorities for cleanup.

Shortly thereafter, a separate but complementary national university-based Superfund Research Program was created by the National Institute of Environmental Health Sciences, a part of the National Institutes of Health. The program was charged with advancing technologies for detection, remediation and evaluation of the effects of hazardous substances on human health.

"The Superfund Research Program merges different disciplines together to address difficult problems," said William Suk, director of the NIEHS Superfund Research Program. "Our ability to provide sustained support to centers like the UA SRC over the long term has resulted in meaningful collaboration with affected communities and cost savings of tens of millions of dollars due to new remediation technologies and reduced exposures."

UArizona's Superfund Research Center was established in 1989 under the direction of Dean Carter, then a professor in the Department of Pharmacy and Toxicology. Carter successfully united medical and environmental scientists across campus to attack the unique environmental contamination issues facing Arizona, said A. Jay Gandolfi, subsequent director of the UArizona center and a professor emeritus in the College of Pharmacy.

"Superfund research projects are truly multidisciplinary, which is very unique," Gandolfi said. "You have the marriage of environmental science to biomedical research and vice versa, which is very easy to say and very difficult to do."

Once established, the team got to work on Tucson's south side, where Air Force contractors and other industries had been dumping solvents and other industrial waste for more than 50 years. With an estimated 47,000 south-side residents exposed to unsafe levels of trichloroethylene, or TCE, and other chemicals discovered in groundwater west of the airport, public outrage reached a boiling point as increased incidences of cancer, birth defects and autoimmune disease were revealed through community activism and news reports.

"We tested several technologies out at the site," said Mark Brusseau, a professor of environmental science who joined the UArizona center in the early 1990s. "It was an open, real-world, living laboratory. We investigated not only the fate and transport process but improved methods to characterize and remediate these sites."

In the race to address growing public health concerns, the UArizona researchers helped to re-solidify standards for TCE as a carcinogen and began the complicated work of investigating reported congenital birth defects, Gandolfi said.

"There was an increased incidence in pediatric heart defects. Those children were being referred up to the university's medical department to cardiology," Gandolfi said. "Subsequent animal studies discovered that even a low-level exposure to TCE at the right stage in pregnancy could affect the development of the heart."

Evolving to Serve All of Arizona

Over the next three decades, the university's Superfund Research Center broadened its research to include other toxicants and superfund sites across the state, including many legacy mining areas laden with arsenic and other hard metal waste.

"The big thing that we've had on our superfund work is evolution," Gandolfi said. "We've been fairly perceptive to move with the times and take our investigation to where it needs to be."

Over a century of hard rock mining has left more than 100,000 estimated abandoned mines or mine features and nearly 400 active mines or development projects in the state of Arizona alone. Arizona's metal mining industry supplies copper, silver, gold, molybdenum and lead used to make cell phones, cars, electrical wiring and other products essential to people's lives, but for communities living near those operations, environmental and public health concerns take center stage.

Arsenic, which currently tops the Agency for Toxic Substances and Disease Registry's priority list, naturally occurs in the environment and is commonly found in crushed rock and mine tailings, leftover materials from the mining process. In the Southwest, these mine tailings may be spread over large distances via wind and water erosion.

"As such, communities neighboring mining activity in the Southwest often experience multiple routes of exposure to arsenic, whether it be through the inhalation of dust or interactions with contaminated water, soil or food," Maier said.

In 2005, the center created a community engagement core to empower underrepresented populations that became a model for Superfund research programs across the nation.

Under Maier's leadership, UArizona's Superfund Research Center has conducted extensive research on arsenic exposure pathways and remediation processes unique to arid and semi-arid climates – bridging environmental science and biomedical research to support not only regulators and the mining industry, but also affected and at-risk communities.

Using mine tailing dust collected from Arizona's Iron King Mine and Humboldt Smelter superfund site –  both known for their elevated levels of arsenic and lead – biomedical researchers recently correlated early life inhalation exposure to arsenic and significant issues in lung development in a mouse model.

In efforts to combat exposure and support the mining industry's goal to reduce environmental impact, Maier led a seven-year field study at the same Iron King Mine and Humboldt Smelter Superfund site. The results showed plant canopy cover and irrigation at these sites substantially decreased dust emissions, as well as the transport of windblown contaminants into nearby neighborhoods.

Stakeholder involvement has been key to the success of the university's Superfund Research Center. Maier co-founded the university's Center for Environmentally Sustainable Mining to serve as a partner and involve the mining industry to identify key research needs.

"We support citizen involvement, bringing in communities to help develop research questions and share knowledge," said Karletta Chief, who leads the community engagement core and is an associate professor and extension specialist in Department of Environmental Science. "In this way, they become active players in understanding and dealing with the environmental health issues they face."

Part of this effort is creating teaching modules to support tribal community colleges. Another is providing information to communities. The UArizona team was one of the first on the ground after the Gold King Mine spill, which released toxic waste water into the Animas River watershed. Within weeks of the spill, they delivered a comprehensive fact sheet to Navajo Nation members to help answer their most pressing public health concerns.

In that spirit, several community collaborations were born, such as associate professor of environmental science Monica Ramírez-Andreotta's Gardenroots program, a citizen science environmental monitoring program that has helped identify how children residing in mining towns across the Southwest are potentially disproportionally exposed to arsenic, cadmium and lead through locally grown produce, water, incidental soil ingestion and dust inhalation.

The Voices Unheard project, which went live in January, is another community-based project grown out of support from the university's Superfund Research Center. Led by graduate student Denise Moreno Ramirez, the environmental health oral history project works to preserve the stories of people who work or live near superfund sites in Arizona.

Training the Next Generation of Environmental Health Researchers

"Superfund is an incubator in a lot of ways. It not only enables junior researchers to get going, but also enables communication among researchers," said Jon Chorover, an environmental chemist and geochemist and head of the Department of Environmental Sciences. "You get people talking to each other about things they wouldn't normally talk to each other about in their own specific disciplines. It's those interfaces between disciplines where the most exciting science happens. It's the most uncharted terrain."

"Every UA SRC student participates in the translation of our research to communities and other stakeholders and each one tells me how useful and meaningful this experience was to add dimension and a public face to the research they perform," Maier said. "Our students are our most important legacy. They are the future leaders who will solve pressing 21st century environmental hazardous waste challenges." 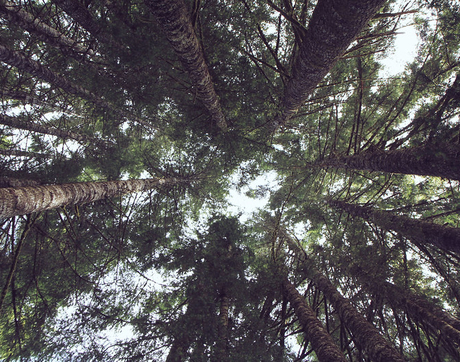