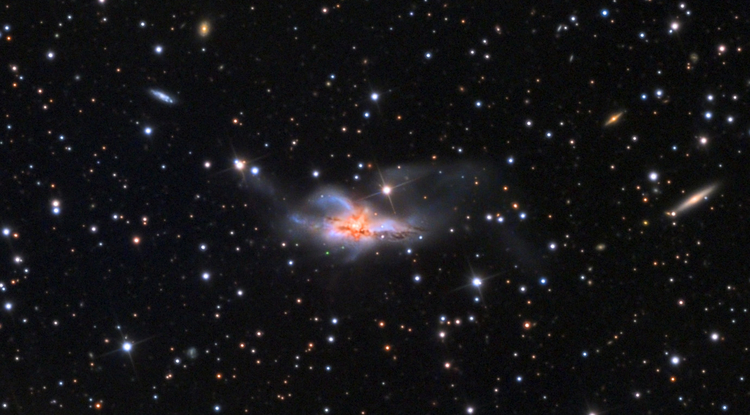 Adam Block, host and astrophotographer at the Mt. Lemmon SkyCenter, has discovered a supernova in a photo he took of a famous galaxy 400 million light years away.
Daniel Stolte
,
University Communications
June 12, 2013
Resources for the Media
Extra Info:

Visit the Mt. Lemmon SkyCenter gallery for more stunning images of the universe. 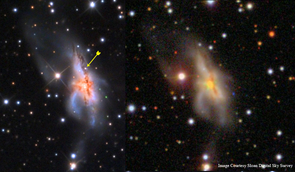 Adam Block spotted the supernova (arrow) when he compared his image of the galaxy to others that were taken before the star exploded. (Photo: Sloan Digital Sky Survey/Adam Block)
Adam Block adjusting the Schulmann Telescope at the Mt. Lemmon SkyCenter, with which he found the supernova. (Photo: Dave Harvey) 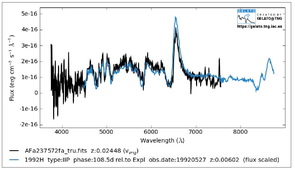 Matching the light spectrum (blue line) of Block’s object onto a known model of this type of supernova (black line) provided the certainty that the object he discovered is indeed a supernova. The large spike tells of glowing hydrogen gas expanding at more than 4,000 miles per second. (Photo: Adam Block/UA Mt. Lemmon SkyCenter) 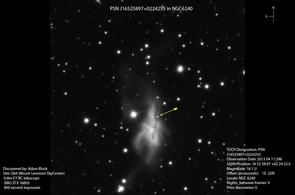 Adam Block's original discovery image shows the supernova as a tiny blip (arrow). (Photo: Adam Block/Mt. Lemmon SkyCenter)
Now you see it – now you don't. This, in a nutshell, describes how Adam Block, renowned astrophotographer and astronomy educator with the University of Arizona's Mt. Lemmon SkyCenter, discovered a supernova in a galaxy far, far away.
Block was looking at a photograph he had taken with the Schulman Telescope at the SkyCenter in April, showing a galaxy located about 400 million light years away, when a tiny blip in the image caught his eye. Indistinguishable from the many other stars visible in the image, Block realized this one was different when he put his photo next to one taken by the Hubble Space Telescope.
"I noticed that there was this star in my picture that wasn't there in the Hubble image," Block said. "That got me excited, and I thought, 'You know what, that looks just like a supernova. That's what they look like.'"
Not all stars end their lives in an explosion of cosmic proportions. Our sun, for example, is too small to go supernova. Once it has exhausted its hydrogen fuel, it will shed much of its mass and end its life as a white dwarf, slowly cooling and eventually fading out.
The kind of supernova Block detected in his image of galaxy NGC 6240 is caused by a single star that blew up at the end of its relatively short life.
"The star had to be at least 10 or more times the mass of our sun," Block explained. "When it explodes, it hurls its material out in a giant bubble that expands and dissipates into the surrounding space. The gas from this explosion is so fast it would race past the Earth in a few seconds."
Block said supernovae typically remain visible only for a few months, growing dimmer over time before they disappear.
He said although extragalactic supernovae are not particularly rare events, he considers himself very lucky.
"They're not terribly unusual," he said. "If you could look at 1,000 galaxies every night, you would witness one supernova on average."
Astronomers find small numbers of them every week, but they use specialized observation software that systematically looks for supernovae, Block said.
"To find one randomly is like winning the supernova lottery. I wasn't looking for a supernova specifically; I was just comparing the images. I do it all by eye. I have been wanting to find a supernova for a long time. To many people, a blip like this wouldn't stand out, but to me, it does."
Block said he owes his supernova lottery ticket to data he had collected for an astronomy workshop in April, which ended up not being used.
"A month after the workshop, I went back to those data and decided to process them and make one of the pretty images as I normally do. When I'm working on faint, deep space objects like this galaxy, I often compare them to existing images of the same object. There weren't many of this object in high resolution, except for that Hubble image."
"NGC 6240 is a famous object," Block said. "It looks like a mess because it's the result of two galaxies colliding. If you look closely, you see two bright spots in the center. Those are the two galactic centers, each of which containing massive black holes, which will eventually merge into one."
The location in which Block first spotted the suspicious "star" turned out to be indicative of a supernova, too, as it is in a region where many stars are being born.
"What happens in a star-forming region is you have a place where massive stars form, and those have short lives. The really big ones last only a few handful of millions of years, and they die in the same region where they were born."
Once Block thought he had found something interesting, he had to make sure it wasn't something that was already known. He turned to the Central Bureau of Astronomical Telegrams, or CBAT, an organization founded in 1880 in Germany and moved to Harvard University in 1965. CBAT keeps a record of discoveries of asteroids, comets, variable stars, planets and supernovae.
Block searched the database for a list of all supernovae that had been discovered in the past three to four months.
"Supernovae like this one remain bright only for a handful of months, and there was nothing reported for galaxy NGC 6240."
Block submitted a report to CBAT, the first step in confirming the new object. To rule out an alternative explanation, such as a variable star appearing in the foreground, an analysis of its spectrum was needed, something Block could not do with the Schulman Telescope. A spectrum can be thought of as a fingerprint of light that reveals clues about composition, temperature and other characteristics of a star or similar object.
"For the final confirmation, someone has to analyze the spectrum and compare it to several models," Block explained. "If it fits, you know it is indeed a supernova."
The blip Block had discovered fit perfectly and was officially designated as supernova SN2013DC on June 9.
"That's is the cool thing," Block said. "In those moments, I realize I may be the only person in the world who knows about this supernova. It's a powerful way to connect with the universe. People used to think that the cosmos was immutable; the heavens were believed to never change. Witnessing the universe change on the short timescales humans can appreciate is amazing."
Topics:
Science and Technology
Share This
Related