An artist’s rendering of the OSIRIS-REx spacecraft’s survey pattern during its Earth-Trojan asteroid search (not to scale). The search occurs Feb. 9-20 as the spacecraft transits the Earth’s L4 Lagrangian region. (Illustration: Heather Roper/UA)

The UA's OSIRIS-REx spacecraft is still a long way from reaching its primary target, asteroid Bennu, but it is opening its robotic eyes to look for a population of space rocks that has eluded scientists for a long time.
Daniel Stolte/UANews and Erin Morton/LPL
Feb. 9, 2017
Resources for the Media 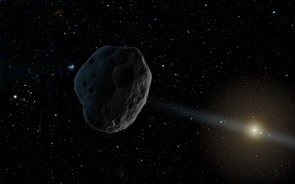 Unseen asteroids may be lurking in the solar system, in places that are difficult to observe from Earth. (Artist's illustration: NASA/JPL-Caltech)
A schematic image illustrating the location of Earth's fourth Lagrange point, where OSIRIS-REx will keep a lookout for more Earth-Trojans. (Illustration: OSIRIS-REx/Heather Roper/UA)

A NASA spacecraft has begun its search for an enigmatic class of near-Earth objects known as Earth-Trojan asteroids. OSIRIS-REx, currently on a two-year outbound journey to the asteroid Bennu, will spend almost two weeks searching for evidence of these small bodies.

Trojan asteroids are trapped in stable gravity wells, called Lagrange points, which precede or follow a planet. OSIRIS-REx is currently traveling through Earth's fourth Lagrange point, which is located 60 degrees ahead in Earth's orbit around the sun, about 90 million miles (150 million kilometers) from our planet. The mission team will use this opportunity to take multiple images of the area with the spacecraft's MapCam camera in the hope of identifying Earth-Trojan asteroids in the region.

MapCam is one of three cameras built at the University of Arizona's Lunar and Planetary Laboratory that will guide the OSIRIS-REx spacecraft to Bennu and document the sampling mission. The search for Earth-Trojans will mark the first time a spacecraft conducts a search for these elusive objects from the L4 point.

The idea for the search originated years ago, shortly after NASA had selected the mission for funding, with Renu Malhotra, a Regents' Professor of Planetary Science at LPL. During a presentation given by Dante Lauretta, now the principal investigator of OSIRIS-REx, Malhotra noticed the spacecraft's trajectory would take it right by Earth's fourth Lagrange point.

"I said to Dante, 'Hey, while you're in that neighborhood of the solar system, you should check out the scenery!'" she says. "I'm thrilled that he and his team were very persistent in making the case to NASA, obtaining approval and making a plan on how to go about the survey."

The search commenced on Feb. 9 and continues through Feb. 20. On each observation day, the spacecraft's MapCam will take 135 survey images that will be processed and examined by the mission's imaging scientists at the UA's Michael J. Drake Building, the mission's headquarters.

Although scientists have discovered thousands of Trojan asteroids accompanying other planets, only one Earth-Trojan has been identified to date, asteroid 2010 TK7. Scientists predict that there should be more Trojans sharing Earth's orbit, but detecting them is extremely difficult, as observers have to point their telescopes to a portion of the sky close to the rising or setting sun. Plus, asteroids are intrinsically faint because they are so small.

"Because the Earth's fourth Lagrange point is relatively stable, it is possible that remnants of the material that built Earth are trapped within it," Lauretta says. "So this search gives us a unique opportunity to explore the primordial building blocks of Earth."

Malhotra echoes Lauretta's excitement: "The search would give us a whole new window on a population of asteroids that we know very little about because we can't see them very well from Earth. We don't know what they might look like — if they are truly primordial material that we don't have in our meteorite collections yet, or whether we might have samples in our collections and simply haven't recognized them as such. If they're out there, it's quite likely they have sent some meteorites to Earth, but we wouldn't know, because we have not been able to connect the dots.

"This is truly an exploration, and there is of course the possibility that we come up empty-handed."

But if it doesn't go that way, scientists will be able to tell us much more about our planet's place in space with regard to what else is out there.

"If there is a sizable population of Trojan bodies where we suspect them to be, it means some might leak out from time to time and possibly hit the Earth or the Moon," Malhotra says. "If we found substantial numbers of these asteroids, it would tell us that Earth's orbit has changed very little over time. Otherwise, it would have been very difficult to retain ancient asteroids in those locations."

Confirming populations of Trojans also might help planetary scientists solve the long-standing "mystery of the missing craters" on the moon, a fascinating side story all by itself.

As the moon travels through space along its orbit around Earth, it gets struck by space rocks crossing its path. Naturally, the hemisphere that is facing forward is being pelted more frequently than the moon's trailing hemisphere, Malhotra explains.

"Just like when you run through the rain, you get more drops on your forehead than on the back side of your head," she says.

But when the researchers calculated what should be the difference in cratering rate on the moon's leading versus its trailing side, they found a discrepancy, showing that the moon gets hit more frequently than it should, based on known asteroid populations.

"One possible explanation is there might be hidden populations of asteroids," Malhotra says, "and the Earth's Trojans could be one of them."

Regardless of whether the OSIRIS-REx team discovers any new asteroids, the search provides a valuable opportunity for a "rehearsal" exercise. The operations involved in searching for Earth-Trojan asteroids closely resemble those required to search for natural satellites and other potential hazards around Bennu when the spacecraft approaches its target in 2018. Being able to practice these mission-critical operations in advance will help the OSIRIS-REx team reduce mission risk once the spacecraft arrives at Bennu.