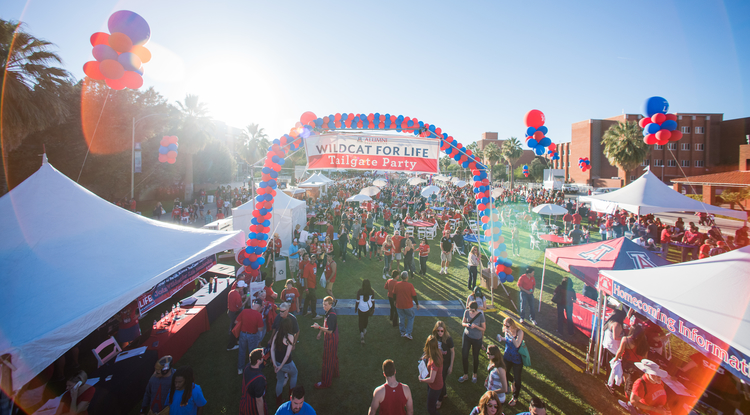 A number of integrated efforts will launch during Homecoming to help reduce waste, increase recycling and encourage composting. Led by the Office of Sustainability, the effort involves about 100 students and employees from across campus. (Photo: Jacob Chinn/UA Alumni Association)

Several initiatives are continuing and new efforts are being introduced during this year's Homecoming to reduce waste going to landfills while increasing the amount of composting and recycling material.
University Communications
Oct. 26, 2016
Resources for the Media 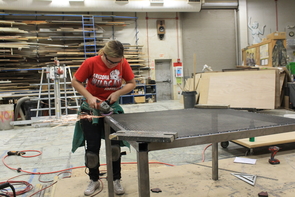 With financial support from the UA Green Fund, Inga Kalvaitis, a theater production major in the UA School of Theatre, Film and Television, designed and built sorting tables for volunteers to use after the Homecoming game. The tables are meant to make the process quicker and more accurate to help improve diversion efforts. (Photo: Julia Rudnick) 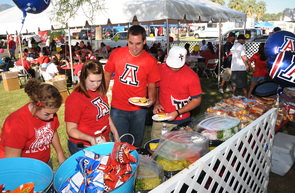 A more extensive initiative is underway to reduce the waste generated during Homecoming, one of the University of Arizona's largest and most visible events of the year.

With tens of thousands of people set to arrive on campus for this weekend's 102nd Homecoming activities, and about 100 sustainability advocates and volunteers involved, a cross-campus collaborative team led by the UA Office of Sustainability is working to minimize the amount of trash generated during the event.

"The reality is that football games generate big waste," said Ben Champion, director of the Office of Sustainability.

"We are trying to leverage exposure and connect with the larger community to foster a culture of sustainability on campus with proven methods," he said. "We are clearly interested in collecting the waste itself, but this is also a great forum for broad-based community engagement on sustainability issues."

In particular, educational outreach on the front end and improved sorting efforts at the end of the game are especially crucial for behavioral change and to ensure that recycling and composting can be maximized. One effort should not exist without the other, Champion said.

"A lot of campuses are doing postgame sorting of their waste, which is really critical — but inefficient for fan engagement," he said. "And you have to do an excellent job of separation if you are going to do a good job with recycling and composting."

In 2014, through the Greening the Game initiative, the Associated Students of the University of Arizona's Students for Sustainability began collecting recyclable material after each home football game. The project has since expanded to include more partners across campus.

Other partners for this year's Homecoming effort include Arizona Athletics, Compost Cats (recognized during the spring by the U.S. Environmental Protection Agency for its food diversion efforts), the Green Team, Facilities Management, the Zona Zoo and the Arizona Student Unions.

"We have lots of fan engagement and lots of student engagement," said Julia Rudnick, coordinator for UA Campus Sustainability Programs.

Initiatives in place during Homecoming include:

"We are showing the proof of concept. We experiment, but we also try to find ways to institutionalize efforts," Champion said.

This year's diversion and educational efforts during Homecoming build on the UA's previously successful efforts, including the first zero-waste football and basketball games, both held in 2015.

Also, the UA in 2015 participated in the Pac-12 Zero Waste Challenge, diverting 69 percent of waste from landfills — nearly 12 tons — and placing third in the competition.

Plans also are underway to divert trash during five UA basketball games during the upcoming season.

"We feel like we have a refined model that works well and that we believe is scalable," Champion said.