Lead an international collaboration to study the influence of soil microbes on global climate: Virginia Rich in the UA department of soil, water and environmental science and the UA Institute of the Environment (left) and Scott Saleska of the department of ecology and evolutionary biology. (Photo: Beatriz Verdugo/UANews)

With a $3.9 million grant from the U.S. Department of Energy, a UA-led international collaboration studies how microbes release greenhouse gases as they gain access to nutrients in the soil thawing under the influence of warmer global temperatures.
Daniel Stolte
,
University Communications
Sept. 23, 2013
Resources for the Media
Extra Info:

Photos of the research team installing monitoring equipment at the study site in Northern Sweden can be viewed in the image gallery. 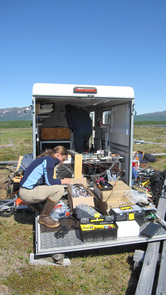 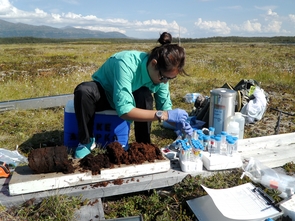