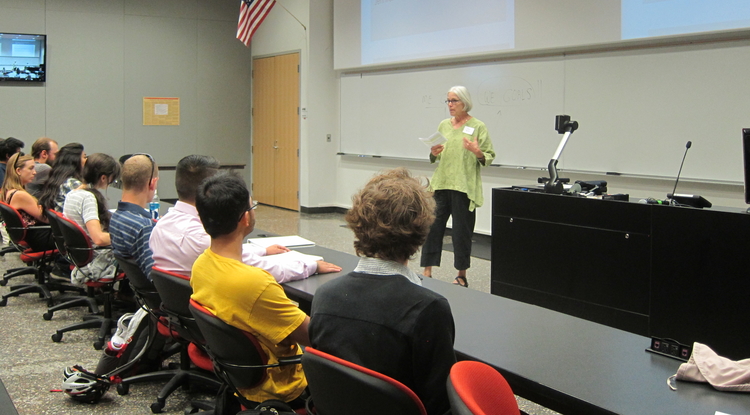 Carol Bender speaks during the orientation session for students in the UA's Undergraduate Biology Research Program, which she oversees. (Photo courtesy of Carol Bender)

Carol Bender, Judith K. Brown and Dennis L. Lichtenberger have been elected based on their work being deemed scientifically or socially distinguished.
University Relations - Communications
Nov. 23, 2015
Resources for the Media
Extra Info:

The 27th annual UA Undergraduate Biology Research Program Conference will be held on Jan. 23 from noon to 5 p.m. in the Environment and Natural Resources 2 Building, 1064 E. Lowell St. The event will include hands-on science activities for families from noon to 1 p.m., a keynote speech at 1 by Dr. Mounir Koussa, a UBRP alumnus and doctoral candidate in the Harvard Program in Neuroscience, and a poster session at 2 showcasing the work of UBRP students. The event is free and open to the public. 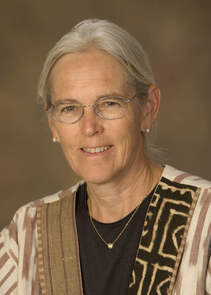 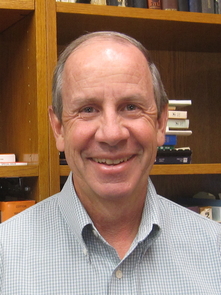 A global network of scientists has elected three University of Arizona faculty members American Association for the Advancement of Science Fellows, a distinction awarded to those who are advancing science in ways that are considered scientifically or socially distinguished.

Dozens of UA faculty members have been named fellows of AAAS, the largest general scientific society in the world. This year's fellows from the UA are:

All told, 347 AAAS members were named fellows this year, formally announced in the AAAS News & Notes section of the Nov. 27 issue of Science. Each fellow also will be presented with an official certificate and a gold and blue (representing science and engineering, respectively) rosette pin during a Feb. 13 event to be held during the AAAS annual meeting in Washington, D.C.

Bender was hired at the University in 1988. She helped to establish high-impact educational experiences, such as UBRP and the Biomedical Research Abroad: Vistas Open! (BRAVO!) Program, which have national and international impact.

UBRP teaches undergraduate students how science is done by involving them in research. Since 1989, UBRP has grown from 19 students to 140 students, now with faculty mentors representing 43 different departments in both Tucson and Phoenix. To date, more than 2,000 students have benefited directly from the program, which has been supported by grants from the Howard Hughes Medical Institute, the National Institutes of Health, the National Science Foundation, the American Society for Pharmacology and Experimental Therapeutics, the Beckman Foundation and UBRP mentors' research grants, in addition to internal funds.

To help students understand their role in society as future scientists, health care providers and voters, Bender organizes activities to supplement the research experience, including an annual ethics retreat where students discuss issues of importance in the conduct of science and medicine and consider the challenges that will call on the coordinated efforts of the next generation of scientists.

Bender also engages students in BRAVO!, which, since 1992,  has supported 250 students doing research in 37 countries. UBRP and BRAVO! students have gone on to earn advanced degrees that prepared them for careers in science, health care and other professions.

Brown, a professor of plant sciences in the College of Agriculture and Life Sciences, earned her doctorate from the UA in 1984.

Brown has been involved as a UBRP mentor, has studied emerging insect-transmitted viral and bacterial pathogens of plants in more than 65 countries, and has carried out collaborative research in Asia, Africa and the tropical Americas.

She is a world authority on whitefly-transmitted viruses and vector biotypes. Her work uses DNA tools to understand causal agents and ways to control them in disease-stricken crop plants, often on a grand scale. Examples include geminivirus-caused pandemics of cotton in Pakistan, India and China and of cassava crops in more than 10 sub-Saharan Africa countries.

In the Americas, Brown is researching DNA and RNA whitefly-transmitted viruses affecting vegetables, and psyllid-borne pathogens that cause tomato vein greening and citrus greening. Brown shares her findings, which can affect local economies and food supplies, through numerous task forces, working groups, consultancies and presentations globally. Her laboratory has hosted more than 60 visiting scholars and graduate students from more than 20 countries.

For her contributions, Brown was named a fellow by the American Phytopathological Society in 2011.

Lichtenberger was selected for pioneering the precise measure of electron energies in complex molecules and for uncovering the ways in which these energies determine chemical, catalytic and physical behavior.

The principles that have emerged from his research are fundamental to broad areas of industrial catalysis, electronic materials, biological functions, and, most recently, converting solar energy to clean and sustainable fuels.

He has developed both instrumentation and theory to probe and understand the nature of matter at the level of electronic structure. A unique feature of his research is the development of gas-phase photoelectron spectroscopy that can measure the electron energies of large molecules. The instrumentation capabilities he has developed in his laboratory are unparalleled. Scientists worldwide have applied this instrumentation to a wide range of chemical systems.

A member of UA's chemistry faculty since 1976, Lichtenberger has been awarded the UA's Faculty of Science Distinguished Teaching Award and the University Graduate and Professional Education Teaching and Mentoring Award. Lichtenberger is also a fellow of the UA College of Science's Galileo Circle.