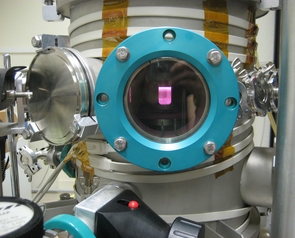 (Click to enlarge) A window into Titan’s atmosphere: Energized by microwaves, the gas mix inside the reaction chamber lights up like a pink neon sign. Thousands of complex organic molecules accumulated on the bottom of the chamber during this experiment. (Photo: S. Hörst) 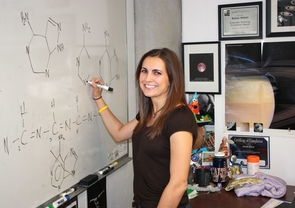 (Click to enlarge) “When I came back and looked at the screen, I thought: That can’t be right,” said graduate student Sarah Hörst.

In an experiment exploring the chemical processes that might be going on in the hazy atmosphere enshrouding Saturn's largest moon, a University of Arizona-led team of scientists discovered a variety of complex organic molecules – including amino acids and nucleotide bases, the most important ingredients of life on Earth.

"Our team is the first to be able to do this in an atmosphere without liquid water. Our results show that it is possible to make very complex molecules in the outer parts of an atmosphere," said Sarah Hörst, a graduate student in the UA's Lunar and Planetary Lab, who led the international research effort together with her adviser, planetary science professor Roger Yelle.

The molecules discovered include the five nucleotide bases used by life on Earth to build the genetic materials DNA and RNA: cytosine, adenine, thymine, guanine and uracil, and the two smallest amino acids, glycine and alanine. Amino acids are the building blocks of proteins.

Hörst is presenting the findings at this year's meeting of the Planetary Science Division of the American Astronomical Society in Pasadena, Calif. on Oct. 7.

The results suggest not only that Titan's atmosphere could be a reservoir of prebiotic molecules that serve as the springboard to life, but they offer a new perspective on the emergence of terrestrial life as well: Instead of coalescing in a primordial soup, the first ingredients of life on our planet may have rained down from a primordial haze high in the atmosphere.

Oddball of the solar system

Titan has fascinated – and puzzled – scientists for a long time.

“It’s is the only moon in our solar system that has a substantial atmosphere,” Hörst said. “Its atmosphere stretches out much further into space than Earth’s. The moon is smaller so it has less gravity pulling it back down.”

Titan’s atmosphere is much denser, too: On the surface, atmospheric pressure equals that at the bottom of a 15-foot-deep pool on Earth.

“At the same time, Titan’s atmosphere is more similar to ours than any other atmosphere in the solar system,” Hörst said. “In fact, Titan has been called ‘Earth frozen in time’ because some believe this is what Earth could have looked like early in time.”

When Voyager I flew by Titan in the 1980s, the pictures transmitted back to Earth showed a blurry, orange ball.

“For a long time, that was all we knew about Titan,” Hörst said. “All it saw was the atmosphere, not the moon’s surface. We knew it has a an atmosphere and that it contains methane and other small organic molecules, but that was it.”

In the meantime, scientists learned that Titan’s haze consists of aerosols, just like the smog that cloaks many metropolitan areas on Earth. Aerosols, tiny particles about a quarter millionth of an inch across, resemble little snowballs when viewed with a high-powered electron microscope.

The exact nature of Titan’s aerosols remains a mystery. What makes them so interesting to planetary scientists is that they consist of organic molecules – potential ingredients for life.

“We want to know what kinds of chemistry can happen in the atmosphere and how far it can go.” Hörst said. “Are we talking small molecules that can go on to becoming more interesting things? Could proteins form in that atmosphere?”

What it takes to make life’s molecules

For that to happen, though, energy is needed to break apart the simple atmospheric molecules – nitrogen, methane and carbon monoxide – and rearrange the fragments into more complex compounds such as prebiotic molecules.

“There is no way this could happen on Titan’s surface,” Hörst said. “The haze is so thick that the moon is shrouded in a perpetual dusky twilight. Plus, at -192 degrees Fahrenheit, the water ice that we think covers the moon’s surface is as hard as granite.”

However, the atmosphere’s upper reaches are exposed to a constant bombardment of ultraviolet radiation and charged particles coming from the sun and deflected by Saturn’s magnetic field, which could spark the necessary chemical reactions.

To study Titan’s atmosphere, scientists have to rely on data collected by the spacecraft Cassini, which has been exploring the Saturn system since 2004 and flies by Titan every few weeks on average.

“With Voyager, we only got to look,” says Hörst. “With Cassini, we get to touch the moon a little bit.”

During fly-by maneuvers, Cassini has gobbled up some of the molecules in the outermost stretches of Titan’s atmosphere and analyzed them with its on-board mass spectrometer. Unfortunately, the instrument was not designed to unravel the identity of larger molecules – precisely the kind that were found floating in great numbers in Titan’s mysterious haze.

“Cassini can’t get very close to the surface because the atmosphere gets in the way and causes drag on the spacecraft,” Hörst said. “The deepest it went was 900 kilometers (560 miles) from the surface. It can’t go any closer than that.”

To find answers, Hörst and her co-workers had to recreate Titan’s atmosphere here on Earth. More precisely, in a lab in Paris, France.

“Fundamentally, we cannot reproduce Titan’s atmosphere in the lab, but our hope was that by doing these simulations, we can start to understand the chemistry that leads to aerosol formation," Hörst said. “We can then use what we learn in the lab and apply it to what we already know about Titan.”

Hörst and her collaborators mixed the gases found in Titan’s atmosphere in a stainless-steel reaction chamber and subjected the mixture to microwaves causing a gas discharge – the same process that makes neon signs glow – to simulate the energy hitting the outer fringes of the moon’s atmosphere.

The electrical discharge caused some of the gaseous raw materials to bond together into solid matter, similar to the way UV sunlight creates haze on Titan. The synthesis chamber, constructed by a collaborating group in Paris, is unique because it uses electrical fields to keep the aerosols in a levitated state.

“The aerosols form while they’re floating there,” Hörst explains. “As soon as they grow heavy enough, they fall onto the bottom of the reaction vessel and we scrape them out.”

“And then,” she added, “the samples went on an adventure.”

To analyze the aerosols, Hörst had to use a high resolution mass spectrometer in a lab in Grenoble, about a three-hour ride from Paris on the TGV, France’s high-speed train.

“I always joke that I felt like a spy in a movie because I would take our samples, put them into little vials, seal them all up and then I’d get on the TGV, and every 5 minutes I’d open the briefcase, ‘Are they still there? Are they still there?’ Those samples were really, really precious.”

Analyzing the reaction products with a mass spectrometer, the researchers identified about 5,000 different molecular formulas.

“We really have no idea how many molecules are in these samples other than it’s a lot,” Hörst said. “Assuming there are at least three or four structural variations of each, we are talking up to 20,000 molecules that could be in there. So in some way, we are not surprised that we made the nucleotide bases and the amino acids.”

“The mass spectrometer tells us what atoms the aerosols are made of, but it doesn’t tell us the structure of those molecules,” Hörst said. “What we really wanted to find out was, what are all the formulas in this mass spectrum?”

“On a whim, we said, ‘Hey, it would be really easy to write a list of the molecular formulas of all the amino acids and nucleotide bases used by life on Earth and have the computer go through them.’”

“I was sitting in front of my computer one day – I had just written up the list – and I put the file in, hit ‘Enter’ and went to go do something,” she said. “When I came back and looked at the screen, it was printing a list of all the things it had found and I sat there and stared at it for a while. I thought: That can’t be right.”

“We never started out saying, ‘we want to make these things,’ it was more like ‘hey, let’s see if they’re there.’ You have all those little pieces flying around in the plasma, and so we would expect them to form all sorts of things.”

In addition to the nucleotides, the elements of the genetic code of all life on Earth, Hörst identified more than half of the molecular formulas for the 22 amino acids that life uses to make proteins.

Titan: A window into Earth’s past?

In some way, Hörst said, the discovery of Earth’s life molecules in an alien atmosphere experiment is ironic.

Here is why: The chemistry occurring on Titan might be similar to that occurring on the young Earth that produced biological material and eventually led to the evolution of life. These processes no longer occur in the Earth’s atmosphere because of the large abundance of oxygen cutting short the chemical cycles before large molecules have a chance to form. On the other hand, some oxygen is needed to create biological molecules. Titan’s atmosphere appears to provide just enough oxygen to supply the raw material for biological molecules, but not enough to quench their formation.

“There are a lot of reasons why life on Titan would probably be based on completely different chemistry than life on Earth,” Hörst added, “one of them being that there is liquid water on Earth. The interesting part for us is that we now know you can make pretty much anything you want in an atmosphere. Who knows this kind of chemistry isn’t happening on planets outside our solar system?”

Funded through NASA’s Planetary Atmospheres Research Program, this research was a collaborative effort of an international team including scientists at the Lunar and Planetary Laboratory and department of chemistry at the UA, the Laboratoire de Génie de Procédés et Matériaux of Ecole Central Paris, France, the Laboratoire Atmosphères, Milieux, Observations Spatiales at the Université Versailles St-Quentin, Guyancourt, France, and the Laboratoire de Planétologie de Grenoble of the Université Joseph Fourier, Grenoble, France.